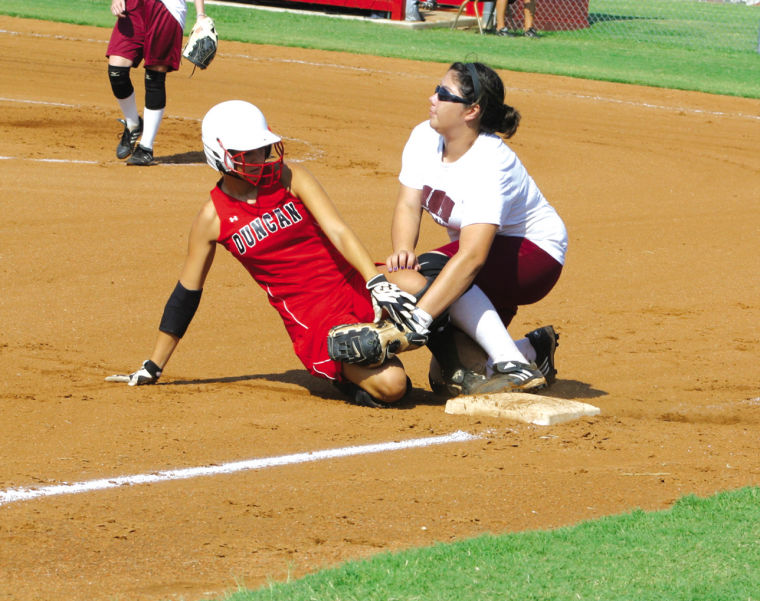 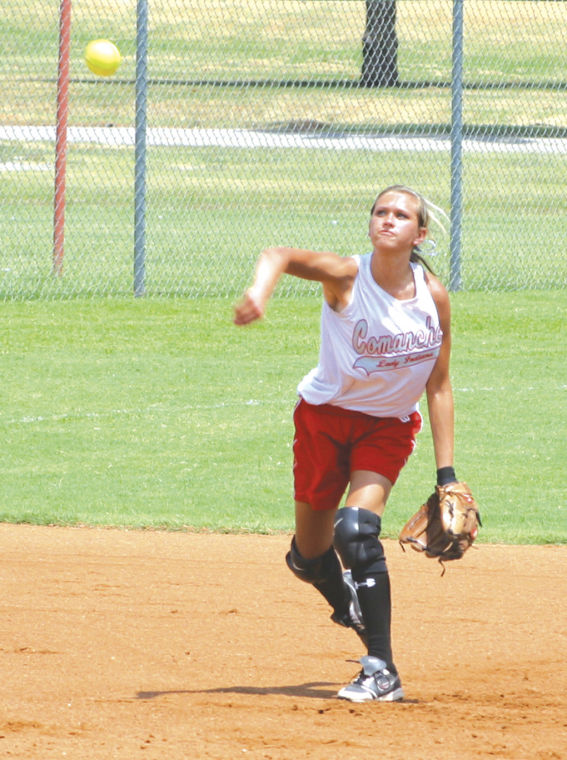 Comanche’s Hailey Block throws out a Frederick runner from shortstop during Friday afternoon’s scrimmage at Duncan.

Comanche’s Hailey Block throws out a Frederick runner from shortstop during Friday afternoon’s scrimmage at Duncan.

Friday afternoon, the Duncan Lady Demons finished hosting their two-day scrimmage invitational with a win over the Waurika Lady Eagles.

Duncan coach Robert Cowan said that he was happy with the pitching shown by junior pitcher Ashlee Perkins.

“I thought that Ashlee threw really well today,” Cowan said. “She had only two hits and a walk on the day, so I was pretty pleased with how she did.”

Cowan also added that the Lady Demons did a good job hitting the ball, but had some issues on defense.

“I thought we were a little late defensively and needed to get our focus back,” Cowan said. “On the positive side the top of our order did a really good job hitting. Tanya (Whaley) hit two for two and Courtney (Moore) and Jacobi (Clark) both made good contact with the ball. I think we did pretty well, but it was still not a real good measure on where we need to be just yet.”

Lady Eagle coach Ivy Fitzgerald said she was proud of the way that her team played over the two days of scrimmages.

“We did better offensively and defensively today (Friday) than we did the first day,” Fitzgerald said. “I think that we just need to get the confidence in ourselves and we will be OK.”

The Lady Eagles finished the two days of scrimmages with wins over the Comanche Lady Indians, the Duncan JV and the Lawton Eisenhower Lady Eagles.

“We did well and in a perfect world I want my girls to be perfect, but I know that we do not live in a perfect world,” Fitzgerald said. “The girls are going to make some mistakes and some physical errors, but we need to keep them down.”

The Comanche Lady Indians battled against the Frederick Lady Bombers and the Lady Eagles of Lawton MacArthur.

“We played much better in the second game than we did in the first game,” Dobbins said. “Defense is going to have to be our key. I know we’ll struggle some at first, but I expect us to be much better by the end of the year.

While Dobbins noted that he believes his defense would get better, he said it was not where it needed to be against Frederick. However, the Lady Indians showed improvement against Mac.

“Our pitching was really good for the games but we just were not where we needed to be against Frederick,” Dobbins said. “We did improve though against Lawton Mac who is an elite team.”

We played pretty well, Christa (Sparks) did a good job for us pitching,” Weldon said. “We didn’t have any runs but had some hits. Defensively we made a few errors, but overall we were happy with our performance against the class 5A team (Lawton Mac).

“I thought against Lawton Eisenhower our defense did well but our bats just did not come around,” Weldon said. “We can get that fixed and that is a reason why we came out here, to practice and learn what we need to work on.”

The Duncan JV team finished out the two day scrimmages with a game against the Temple Lady Tigers. JV coach Aaron Minor said that he was proud of how his team improved over the two days.

“We did much better than yesterday which is an encouraging thing,” Minor said. “In the field, we played pretty well and our bats got around quicker so we did pretty well.”