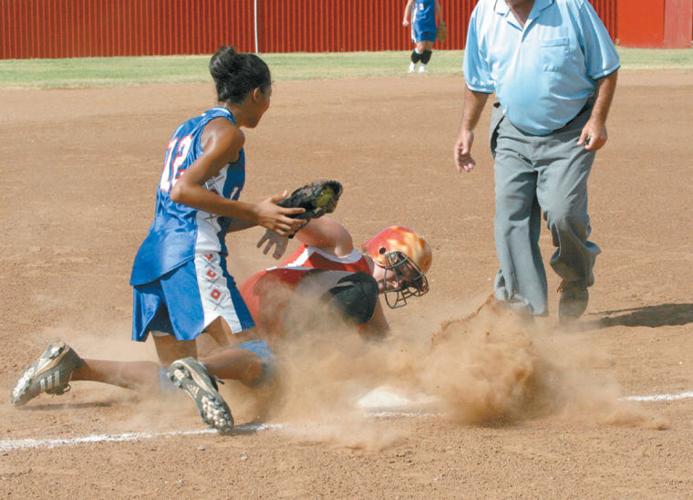 Empire’s Kelsey Hancock is tagged out on a close play at third Tuesday at Empire. Hancock drove in Jessica England with her hit in the second inning. 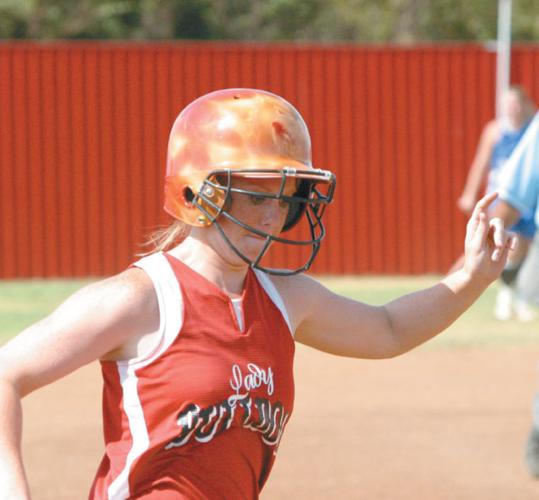 EHS’ Jessica England looks to make sure she touches third base on her way home.

Empire’s Kelsey Hancock is tagged out on a close play at third Tuesday at Empire. Hancock drove in Jessica England with her hit in the second inning.

EHS’ Jessica England looks to make sure she touches third base on her way home.

Jodee Rather had her six-game hit streak snapped Monday as the Empire Lady Bulldogs fell to the Fort Cobb-Broxton Lady Mustangs, 10-2. However, Rather and the rest of the Lady Bulldogs got restarted against the Frederick Lady Bombers, as they picked up an 8-3 win. Fort Cobb-Broxton 10, Empire 2 The Lady Bulldogs were error-prone as they allowed Fort Cobb-Broxton to take extra opportunities to score runs, but the real difference in the game might have been Lady Mustang shortstop Autumn Klugh. Klugh was 4-for-4 with four runs scored and two RBIs. She also made several defensive plays that killed EHS rallies. “She made a lot of great plays that took us out of some innings that would have been big for us,” Empire head coach Clay Davis said. “We cannot give good teams more than three outs. If someone gives us extra outs, we’re going to make them pay, and that is exactly what Fort Cobb did to us.” Empire held the Lady Mustangs to one run in the first inning, and came back to tie the game in the bottom of the second when Jessica England walked and scored on a double by Kelsey Hancock. Fort Cobb-Broxton reclaimed the lead in the top of the third with two runs on two hits. Empire committed two errors in the frame to aid the Lady Mustangs. The Lady Mustangs built on their lead in the fourth on two errors and three hits, and finished the game off with four runs in the fifth. Empire tallied one run in the bottom of the fifth, as England reached on an error and scored on a single by Natalie Whitt for the 10-2 final. “We hit the ball well,” Davis said. “We could have been more disciplined at the plate.” Ryan Rothner took the loss, allowing two earned runs on nine hits. Rothner also struck out seven over the five-inning game. “Ryan threw pretty well,” Davis noted. “When it is 100 degrees out here, we have to do a better job defensively. We have to take care of our pitchers better.” Hancock and Whitt were both 1-for-2 at the plate in the game for EHS. Empire 8, Frederick 3 Freshman Kaylee Price got the win against the Lady Bombers, striking out seven and walking five over seven innings. Of the three runs that she allowed, only one was earned. Empire started out with two runs in the first inning and added three more in second. Frederick cut the Lady Bulldogs’ lead to 5-3 in the top of the fifth, but EHS got a run back in the home frame of the inning. The Lady Bulldogs capped the scoring with two runs in the bottom of the sixth. Rather was 2-for-3 with two RBIs and Kassi Rose was 2-for-4 and also drove in two runs. Rothner was 1-for-3, but scored three times. Empire will play today at Elmore City-Pernell, and will finish out the week at the Chisholm Trail Conference Tournament.