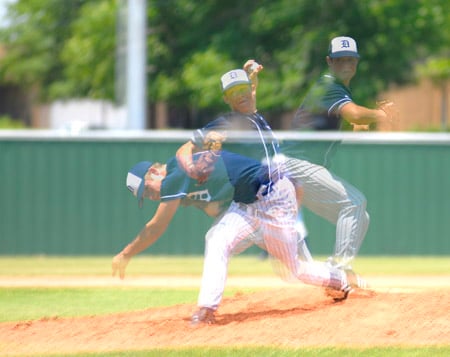 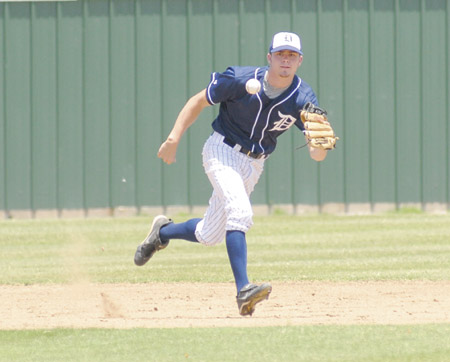 Duncan Drillers shortstop Dearth Parker eyes an out as he closes in on a high hopping ground ball Sunday at Sportsman’s Park.

Duncan Drillers shortstop Dearth Parker eyes an out as he closes in on a high hopping ground ball Sunday at Sportsman’s Park.

The Duncan Drillers moved to 3-0 on the season with a 12-2 win over Yukon Sunday at Sportsman’s Park as American Legion baseball returned to Duncan for the first time in five years. The Drillers pounded out 11 hits, and every batter in the Duncan order had a hit. “I think we’re strong one through nine,” Drillers head coach Josh Butler said. “Every one of these guys knows baseball and they know what to do with it when it’s put in the right spot.” Dearth Parker was 2-for-3 at the plate in his first start for Duncan, while Kyle Palacol was 2-for-4. Trent Wilkins was 2-for-5. Duncan broke a 2-all tie in the bottom of the third with five runs. Sheylon Roberson and Kale Murphree singled to start the Drillers off in the frame, and Roberson scored on error that allowed Trevor Suffal to reach first for a 3-2 Duncan cushion. Murphree scored on a single by Cory Lillard for a 4-2 cushion. Palacol came up with an infield single to push the Drillers’ advantage to 5-2. Taylor Francis singled in Lillard to up the Drillers’ lead to 6-2. Palacol scored on a single by Parker. In the fourth, Roberson and Murphree both drew walks. With one out, Trent Wilkins walked to load the bases. Roberson scored on a sacrifice fly by Lillard for an 8-2 edge. John Darter doubled to make it 10-2, and Darter scored on an error. Duncan sent Tyler King to the hill, and he got the win going six innings, striking out eight, and walking one. He allowed two runs on two hits. Ryan Bailey pitched three innings of relief, allowing no runs, one hit and one walk. “Tyler threw well. The only reason I pulled him is because it has been two weeks since he’s thrown. We’ll start everyone all over again and work them short until they get into shape,” Butler said. “His location was off early, but he got it going. Ryan Bailey threw outstanding.” Duncan ended the game in the bottom of the eighth, as Trevor Suffal doubled and scored on a single by Wilkins to put the run rule into effect at 12-2. Duncan had a 2-0 lead going into the third and King had a perfect game going before Yukon’s Kurt Walker singled to lead off the third. With two outs, Jake Picklesimer hit a two-run homer to tie the game at 2-all. Back in the first, Parker led off with a double for the Drillers, and scored on an error that put Murphree at second for a 1-0 edge. Murphree scored on a single by Trent Wilkins. The Driller defense didn’t commit an error over eight innings. “This defense is solid. You have two All-Staters and an alternate in the infield, and you have speed all over the outfield,” Butler said. “These guys are having fun. When you’re having fun it is a lot easier to come out and play.” Duncan will be back in action at 6 p.m. Tuesday at Burkburnett. Duncan 12, Yukon 2 Yukon 002 000 00x – 2 3 3 Duncan 205 400 01x – 12 11 0 Yukon – Graham King, Jake Picklesimer (4), Cody Southerland (7) and Seth Huffine. Duncan – Tyler King, Jake Bedoka (6), Ryan Bailey (6) and John Darter. W – T. King. L – G. King. 2B – Yukon: None. Duncan: Dearth Parker, Kyle Palacol, Trevor Suffal. 3B – None. HR – Yukon: Picklesimer. Duncan: None.

KONAWA [ndash] On Nov. 18, 2020, Jackie Lajean Lane Chapman, a loving wife, mother, and meemaw left this world To be with our Lord and Savior. She was surrounded by her family. She was born Oct. 21, 1949. She was a nurse and homemaker who loved family and cooking. A private celebration of li…

ADA [ndash] James Donald Spurlock, 84, of Ada, Oklahoma passed away Wednesday, Nov. 18, 2020, in Ada. Arrangements are pending at this time. For up to date service information please follow us on Facebook at Estes Phillips Funeral Home.