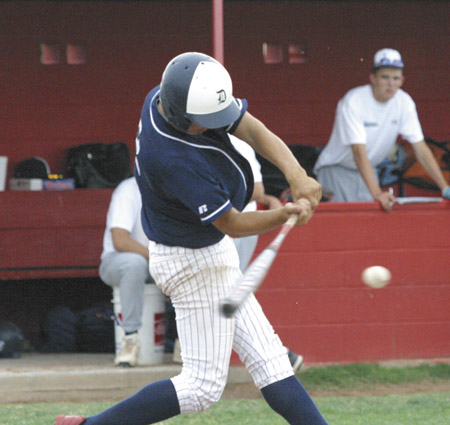 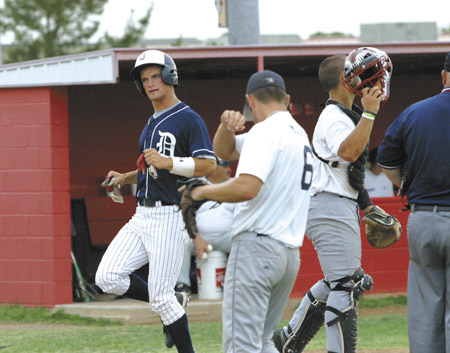 The Duncan Drillers came away with a split against the Lawton Colonels Thursday night. The Drillers won the opener of the doubleheader 10-3 win, but dropped the nightcap, 4-3. All of the Colonels’ runs on the night were unearned. Duncan committed five errors in both games combined. “I’m very disappointed,” Drillers head coach Josh Butler said. “I thought Mack (McPhail) pitched well enough to win (the second game). McPhail was the hard-luck loser in Game 2, pitching six innings of five-hit ball and striking out seven. Ryan Bailey took the loss, allowing an unearned run in the bottom of the seventh. “I thought Ryan came in and did his job,” Butler said. “He got the ground ball and the strike out.” Bailey was able to close out the first game, allowing one walk and striking out one Duncan 10, Lawton 3 The Drillers trailed 3-1 after the second inning, but tied the game with a pair of runs in the top of the fourth. Sheylon Roberson walked, and Trent Wilkins followed with a single. Cory Lillard singled to load the bases. Roberson scored on a sacrifice fly by Kale Murphree, and Wilkins scored on an error to tie the game at 3-all. In the fifth, Duncan added two more runs. With two outs, Dearth Parker singled and Roberson reached on an error. Parker scored on a double steal to put Duncan up 4-3, Wilkins drove in Roberson with a single. Murphree got the Drillers started in the sixth, as he reached on an error. Tyler King doubled to put runners at second and third. Both runners scored on a McPhail single for a 7-3 edge. Duncan capped the scoring with three runs in the seventh. Wilkins doubled and Lillard came up with a base knock. Wilkins scored on a double steal, and Lillard scored on a single by Murphree. Murphree scored on a passed ball for the 10-3 final. Martin allowed just one hit and struck out four, while hitting one batter and walking one. “Caleb threw as bad as he has all season, but he has thrown very well all year, too,” Butler said. Wilkins paced Duncan at the plate, going 3-for-4 with two runs scored and two RBIs. Parker and Lillard and King were all 2-for-4. “They hit the ball real well in the first game,” Butler said of his squad. “We were real aggressive on the bases, and we are tough to beat when were aggressive.” Lawton 4, Duncan 3 Bailey suffered the loss for the Drillers, while Brody Taliaferro got the win for the Colonels. Taliaferro pitched one inning of relief for Lawton striking out two, as he retired the side in order in the top of the seventh. Bailey was one out away from escaping the seventh, when an errant throw allowed the winning run to score. The Drillers scored all three of their runs in the top of the second. Keaton Francis was hit by a pitch and Palacol reached on an error. Payden Fultz drew a walk to load the bases. Francis scored on an error, while Palacol and Parker scored on a single by Wilkins to push Duncan to a 3-2 edge. Lawton scored two runs on a wild pitch and a passed ball in the first inning. The Colonels got one run across in the sixth when William Wallace grounded into a fielder’s choice to tie the game at 3-apiece. Duncan mustered just two hits, as Parker and Wilkins both went 1-for-4. The Drillers travel to Elk City today for the Elk City Festival. Duncan will play at 6 p.m. and 8 p.m. today, and 1 p.m. Saturday.