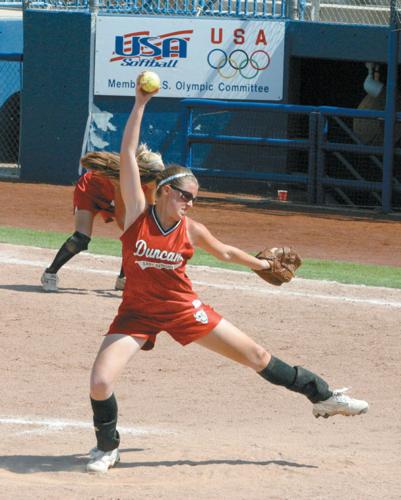 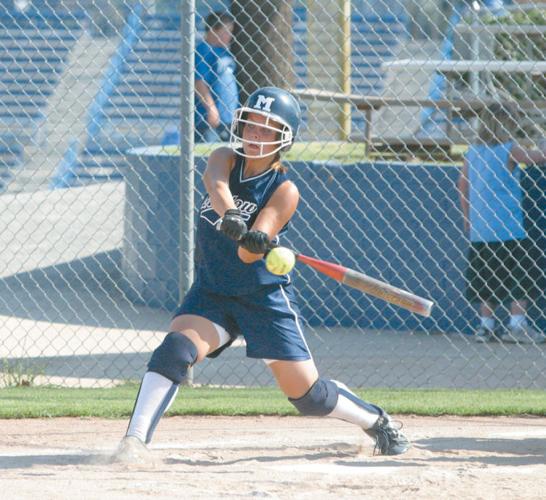 Marlow’s Bretlie Richardson takes a cut against Hilldale at the Hall of Fame Shootout in Oklahoma City.

Marlow’s Bretlie Richardson takes a cut against Hilldale at the Hall of Fame Shootout in Oklahoma City.

It was Friday, but there was no partying for Duncan and Marlow as they took part in the Hall of Fame Shootout in Oklahoma City. Combined, the two teams scored three runs in three games, while their opponents scored 11. The Lady Demons started their day with a 2-1 loss to Pryor, followed by a 6-2 defeat to Deer Creek. The Lady Outlaws were frustrated as well, as they took a 3-0 loss at the hands of Hilldale. The Lady Outlaws did take a 7-2 decision from McCloud in their final game of the festival. In other action: Comanche lost to Lexington 11-0, and Rush Springs scraped out a 3-2 win over Pawhuska. Duncan’s loss to Pryor came in the international tie breaker. The Lady Demons saw Judy Dines pitch a nice game, but also witnessed uncharacteristic play in the field. Dines was in control in the pitcher’s circle, striking out six while only walking one. Dines gave up two hits in the game, while the Lady Demons’ bats were able to put up five hits. “She did a good job,” Duncan head coach Butch Evans said. “If she gets any support then we win.” DaVee Croy led Duncan at the plate with a 3-for-3 game. Croy had two doubles and a RBI single, which brought in Madeline Murrell who had reached on an error. Caylin Lynch and Kenzie Kennedy each had singles in the game for Duncan. Pryor scored the winning run on a passed ball to hand the Lady Demons the loss going into its next game. In its final game on Friday, Duncan started slow on offense and especially on defense. Deer Creek took advantage of five Lady Demon errors in the game. Deer Creek jumped out to an early three run lead in the first inning. Duncan starter Kylie Montgomery recorded two outs, but was pulled in the first inning for Dines. Dines allowed three more runs in the second, each of which were unearned. Behind Dine’s pitching, and a renewed effort of defense, the Lady Demons silenced Deer Creek for the rest of the game. Duncan received hits in the game from Croy, Kennedy, Murrell and Lynch. Each player had singles, while senior Courtne St. Clair came through with a two- RBI double in the third inning. “We were able to hit the ball in that game,” Evans said. “We have to start getting runs in these games though.” The Lady Demons tried to rally in the fifth, as Croy and St. Clair reached on singles. Jill Rodgers put a charge into the ball, driving it to deep centerfield where the Deer Creek centerfielder made the catch to end the contest. The Oklahoma City air wasn’t healthy for the Lady Outlaws either. Marlow faced a strong pitching performance from Hilldale, where they were shut down. The Lady Outlaws were baffled by the speed of the pitching, striking out 12 times in the game. Marlow was no-hit in the contest, and only saw Taylor Leippe and Sarah Coast reach on walks. Kailee Roe pitched a solid game for Marlow, striking out three and walking three. The freshman hurler gave up four hits, and was hurt by four Marlow errors. Hilldale scored all of its runs in the fourth inning.