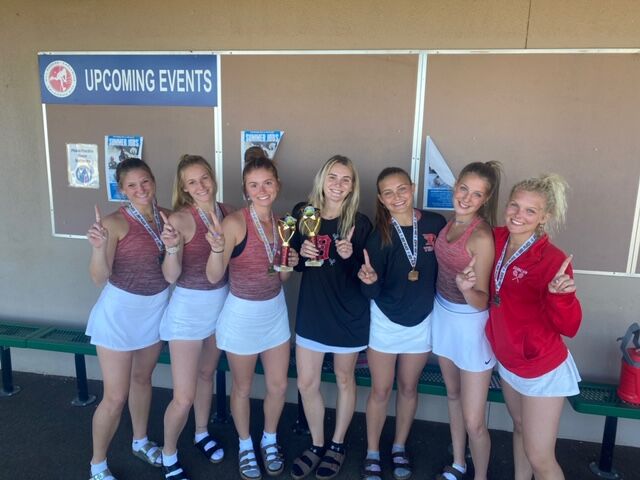 Duncan Girls’ Tennis holds up their first place trophy as they had a big week with three tournaments on the road including the first place finish at Crossings Christian. 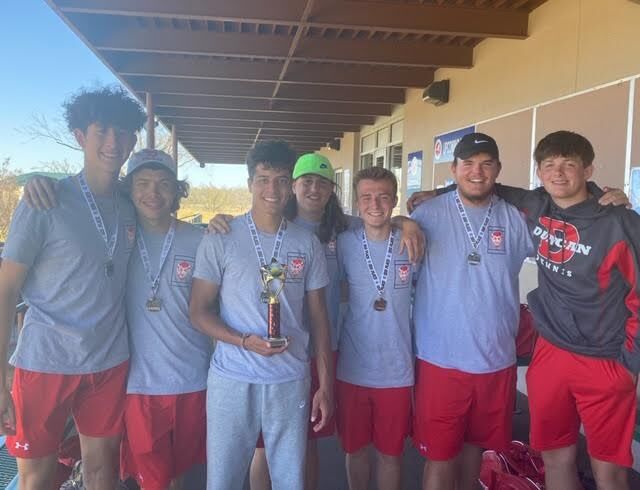 The Duncan Boys’ Tennis team holds the third place trophy as they took home the honors during the Putnam City North Tournament.

Duncan Girls’ Tennis holds up their first place trophy as they had a big week with three tournaments on the road including the first place finish at Crossings Christian.

The Duncan Boys’ Tennis team holds the third place trophy as they took home the honors during the Putnam City North Tournament.

The Duncan Tennis teams had one of their biggest weeks to date in the 2021 season with both the girls’ and boys’ team having a strong week with top placements in their respective tournaments.

The Lady Demons and Demons both played on March 29 with the girls’ team appearing in the Crossings Christian Tournament and the boys playing in the Putnam City North Tournament.

Marissa Bumgarner was the one singles in the tournament and finished in fourth place at Crossings Christian, while the two singles in Alyssa Mitchell took home first place honors in her division.

The boys had to play on back-to-back days as their next tournament took place on March 30 at Crossings Christian where they took home a fourth place finish as a team.

Kuehn finished the one singles competition in fifth place while Reyes took home the fifth place honor in two singles with the one doubles team of Davis and Johnson also finishing fifth in the competition.

Link and Van der Breggen in the doubles two competition finished fourth overall and as a team were only a few points away from finishing as the second place team in tournament two of the week.

The Lady Demons’ second tournament ended up being a big highlight for the Lady Demons as they finished first overall as a team.

Switching the lineup a little, Mitchell ended up finishing fourth in the one singles competition while Moore took home the third place honor in the two singles tournament.

Duncan boys’ had their final tournament of the week on Friday in Ada as the team finished sixth overall with several teams winning in different portions of the bracket.

The best finish came from the one doubles team of Davis and Johnson who finished fifth while Link and Reyes finished ninth in doubles two and won the consolation bracket.

The very next day, the Lady Demons’ tennis team went to Ada and finished sixth overall as a team in a meet that saw many 6A schools and private schools.

Lady Demons and Demons tennis coach Darren Cobble was proud of the effort from both teams in what has been the hardest week of their season so far.

“We had a really busy and physically demanding week last week. Boys and girls each played three tournaments, and tough tournaments at that,” Cobble said. “This shows the mental and physical toughness of the teams we have. This was our toughest week physically of the season.”

After a long week of three tournaments, the Duncan tennis teams will have some rest as their next tournament will take place at home as they host the BancFirst Tournament starting at 8 a.m. April 10 at  Duncan High School.

ADA [ndash] Services for Ronald Wayne "Ronnie" Roberts, 61, of Ada will be held at a later date. Mr. Roberts passed away Wednesday, April 7, 2021, at his home. He was born July 25, 1959, in Ada, OK to Melvin Austin and Edna Pauline Dew Roberts. Mr. Roberts was a handyman. Survivors include t…