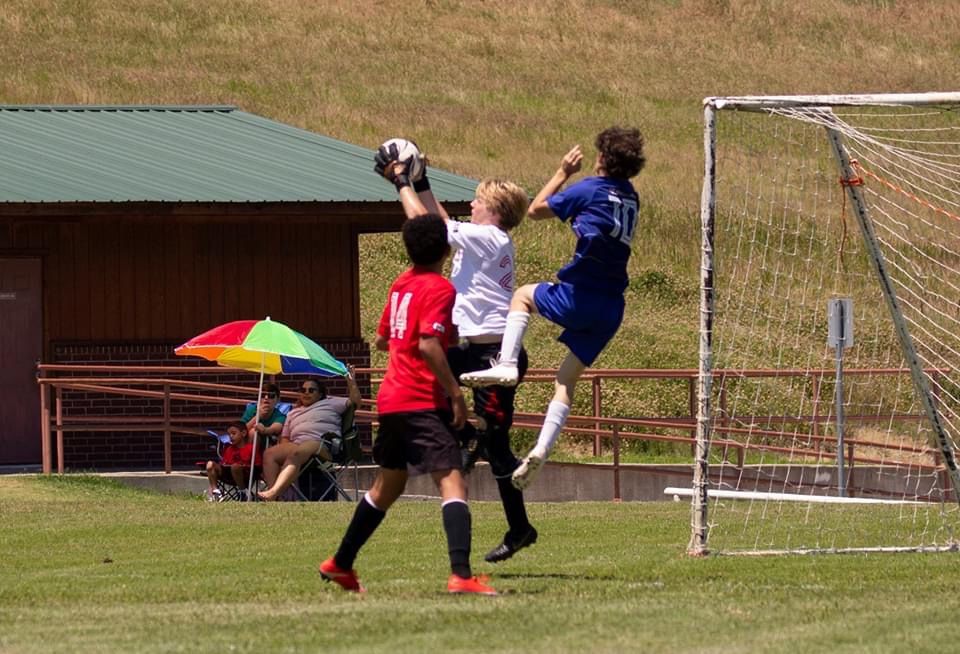 Duncan 2020 goalkeeper Aiden Scott jumps up to save the ball during this past Sunday’s 6-1 win over Atoka. 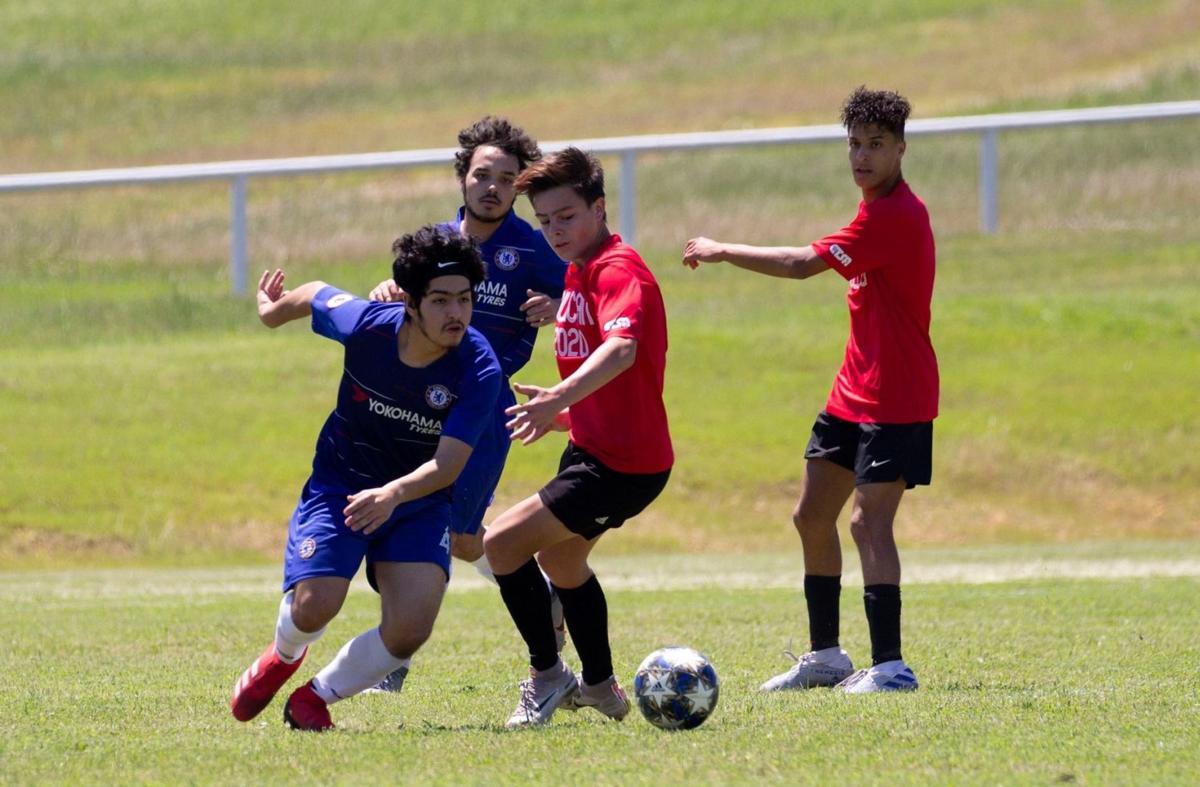 Ayden Thompson tries to get in front of an Atoka player Sunday. The Duncan 2020 team had six different goal scorers including Thompson in their first victory of the summer season. 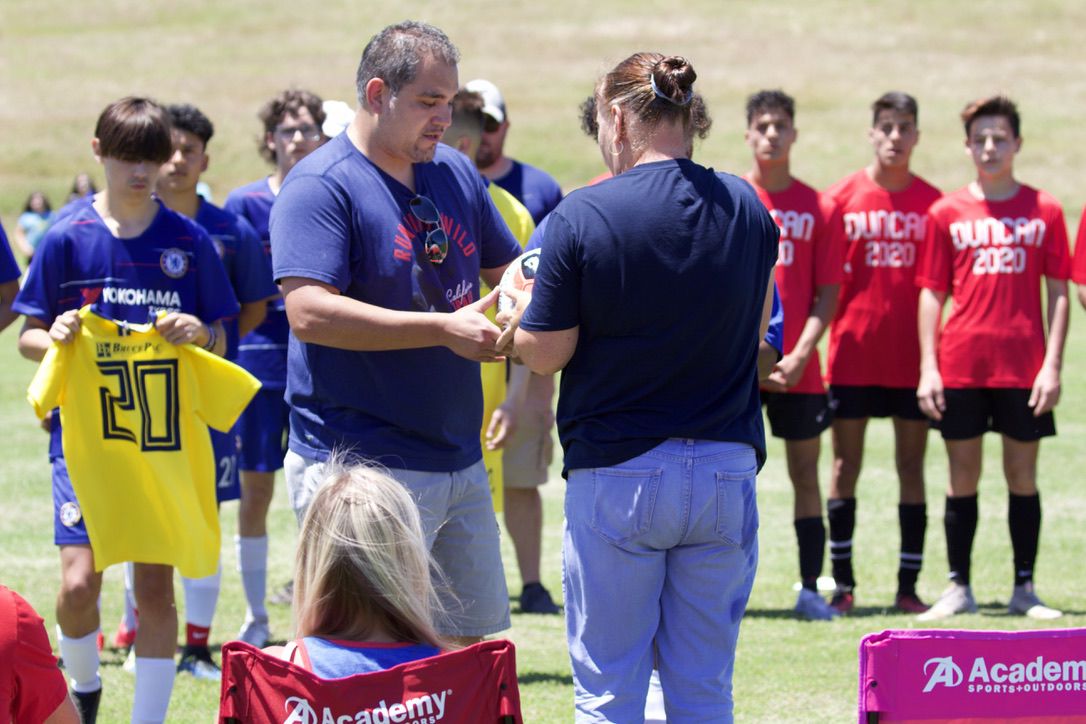 Duncan 2020 boys team stands as Atoka's coach hands a jersey to the mother of one of the players who was tragically killed in an accident in Durant.

Duncan 2020 goalkeeper Aiden Scott jumps up to save the ball during this past Sunday’s 6-1 win over Atoka.

Ayden Thompson tries to get in front of an Atoka player Sunday. The Duncan 2020 team had six different goal scorers including Thompson in their first victory of the summer season.

Duncan 2020 boys team stands as Atoka's coach hands a jersey to the mother of one of the players who was tragically killed in an accident in Durant.

The first game of a season is usually special in regards to starting the preps for one goal, but the Duncan 2020 boys won their opener in a special game when they beat Atoka 6-1 this past Sunday.

Duncan 2020 boys played an Atoka team dealing with the loss of one of their team members who died in a car crash that killed four teenagers in Durant earlier this year.

As their first game played in Atoka since the tragedy that took the life of the athlete who was set to be a part of the Atoka U19 team, the Duncan 2020 team joined members from Atoka to present a game jersey.

Duncan 2020 boys coach Kathy Mead said the pre-game ceremony was to honor their player as both teams gave a #20 jersey to the mother of the player that lost his life and both teams took a knee for 20 seconds in remembrance of the Atoka player.

With the game starting, Jose Gonzalez got the first goal for the Duncan team followed by Nick Johnson, Victory Acosta, Ayden Thompson, Tanner Greening and Alex Fernandez all joining in the scoring of goals in the victory.

Mead said the game was something she will remember and loved how the boys came together to honor and play together.

“Though we kind of started on a somber note from the pre-game, we picked up and played together,” Mead said. “I was very happy with the whole team. Jose got us started with a quick goal, and that was the spark we needed. Nick Johnson, who hasn't played in about 4 years, meshed well with his brother Ben around the goal. Using Preston Weaks in the midfield was definitely a plus. He was a big presence and kept the ball going our way. It was a hot day, and we only had three subs, but we made it work. They were so happy to get back on the field and play. The two-hour drive was definitely worth it.”

The only goal scored against Duncan was actually an own-goal off a corner kick.

“Overall, it was a great effort. Our defense was pretty solid the whole game, and I was proud of that,” Mead said. “The Atoka goal was an own-goal off a corner kick that deflected off one of our player's chests. I just think we need to slow the ball down on offense. We did a little better at that in the second half and had better ball movement. I know they were excited to play, and that contributed to some of the haste. We just need to stay hydrated, and we will be okay. The days are only going to get hotter. These guys love the game, and they know how to play.”

Duncan 2020 girls will have the next game as they play at 1 p.m. Saturday in Edmond. The boys will play their first game at home at 4 p.m. Saturday at Abe Raizen Park in Duncan.

The boys will play in back-to-back games as the next game after Saturday will take place at 4 p.m. Sunday at Midwest City when they play against Stillwater’s U19 team.