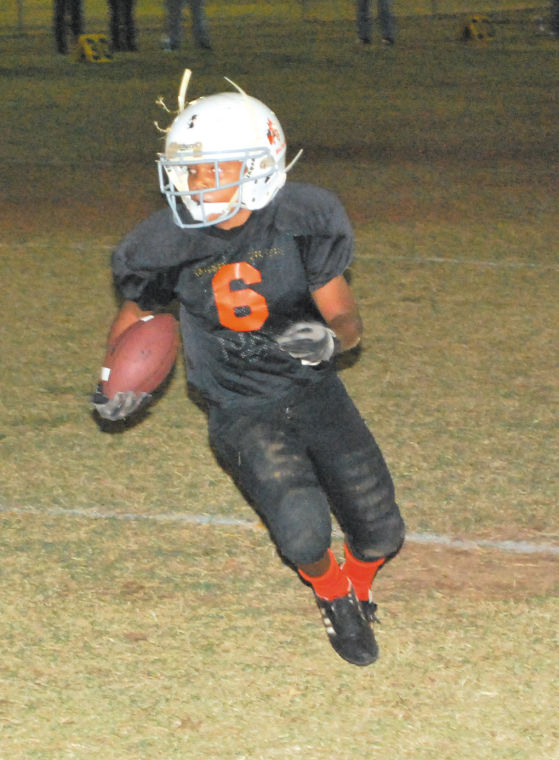 Jon Babineaux looks to turn it upfield for the Hornets during the Stephens County Youth Football Association third and fourth grade championship game. 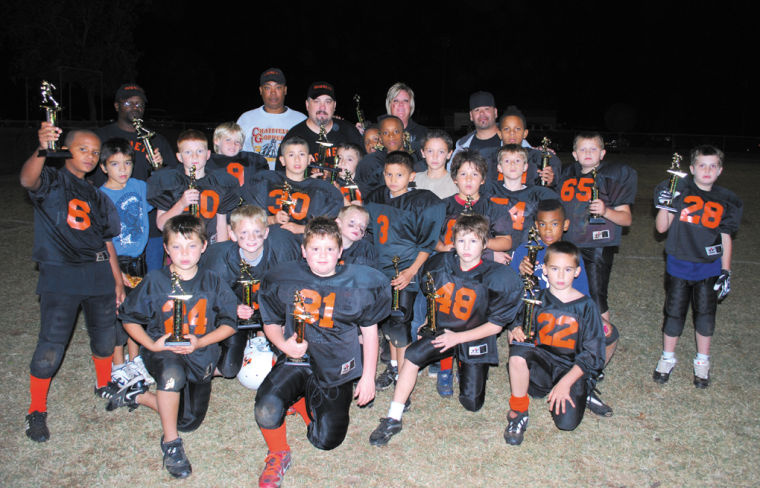 Hornets players and coaches pose with their championship trophies after their 12-6 win Tuesday night.

Jon Babineaux looks to turn it upfield for the Hornets during the Stephens County Youth Football Association third and fourth grade championship game.

Hornets players and coaches pose with their championship trophies after their 12-6 win Tuesday night.

Fall weather settled in Tuesday night as temperatures dropped into the low 50s. That meant one thing for Mike McCurdy, the coach of the Hornets football team of the Stephens County Youth Football Association: A cold “shower.”

After the Hornets rallied to defeat Marlow White, McCurdy was the recipient of a water dousing, similar to the Gatorade baths coaches receive after their teams win big games. And this was a big game.

“It was definitely the coldest shower I’ve ever had,” McCurdy quipped.

Marlow White was their opponent, a team which had won just two games all season before peaking in the playoffs. Marlow took the No. 5 seed and defeated the No. 4 seed in the first round and No. 1 seed Comanche in the semifinals to reach the championship game. Coach Ronnie Ladon expressed his gratitude for his players and their parents.

“I’m really proud of these kids,” Ladon said. “I love every single one of them. This was my first year coaching and a lot of these kids, it was their first year playing. We grew together this season.”

Marlow received the opening kickoff and converted several key plays on its first drive. Caleb Ellsworth ran a reverse for a first down on a third-and-long play. On another third down later in the drive, Houston Davis connected with Ellsworth to put Marlow in the red zone. A few plays later, Davis found Dayton O’Neil for a 10-yard touchdown pass to give Marlow a 6-0 lead.

The Marlow White took the lead into halftime and the second half belonged to No. 6 for the Hornets, Jon Babineaux.

“I’m just really proud of our kids,” McCurdy said. “We’ve got a great group of kids and I couldn’t ask for anything better. We started in 100-degree heat in August and these kids persevered.”

After the game, players from both teams received trophies for their outstanding seasons, and both coaches were awarded trophies for runner-up and champion, as well.

— Ben Whitehead is the sports editor for The Duncan Banner. He can be reached at 255-5354, Ext. 165, or via e-mail at ben.whitehead@duncanbanner.com.

ADA [ndash] Todd Wallace Byrd, 59, of Ada, Oklahoma passed away Saturday, Jan. 23, 2021, in Ada. Due to the current pandemic, a memorial service will be held at a later date.