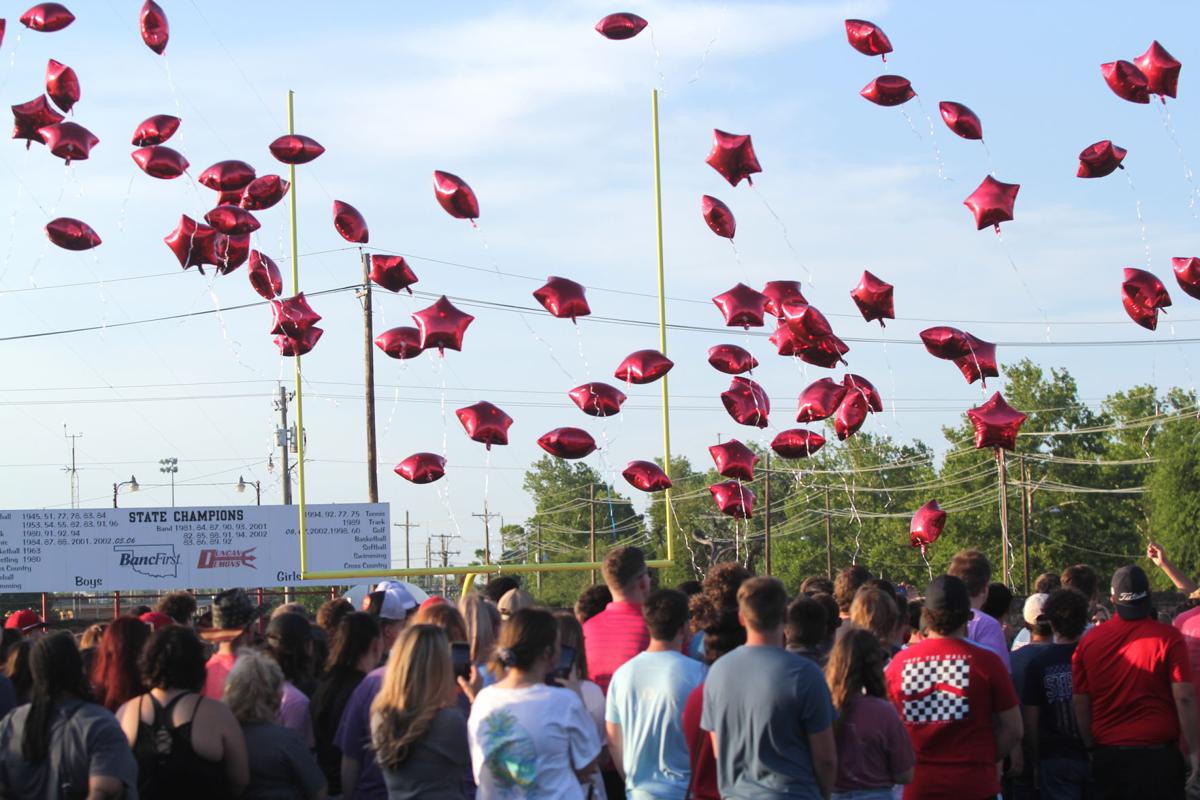 The group at Halliburton Stadium Friday evening released 76 red balloons during a vigil hosted for Thomas Redhead, who suddenly passed away this week. 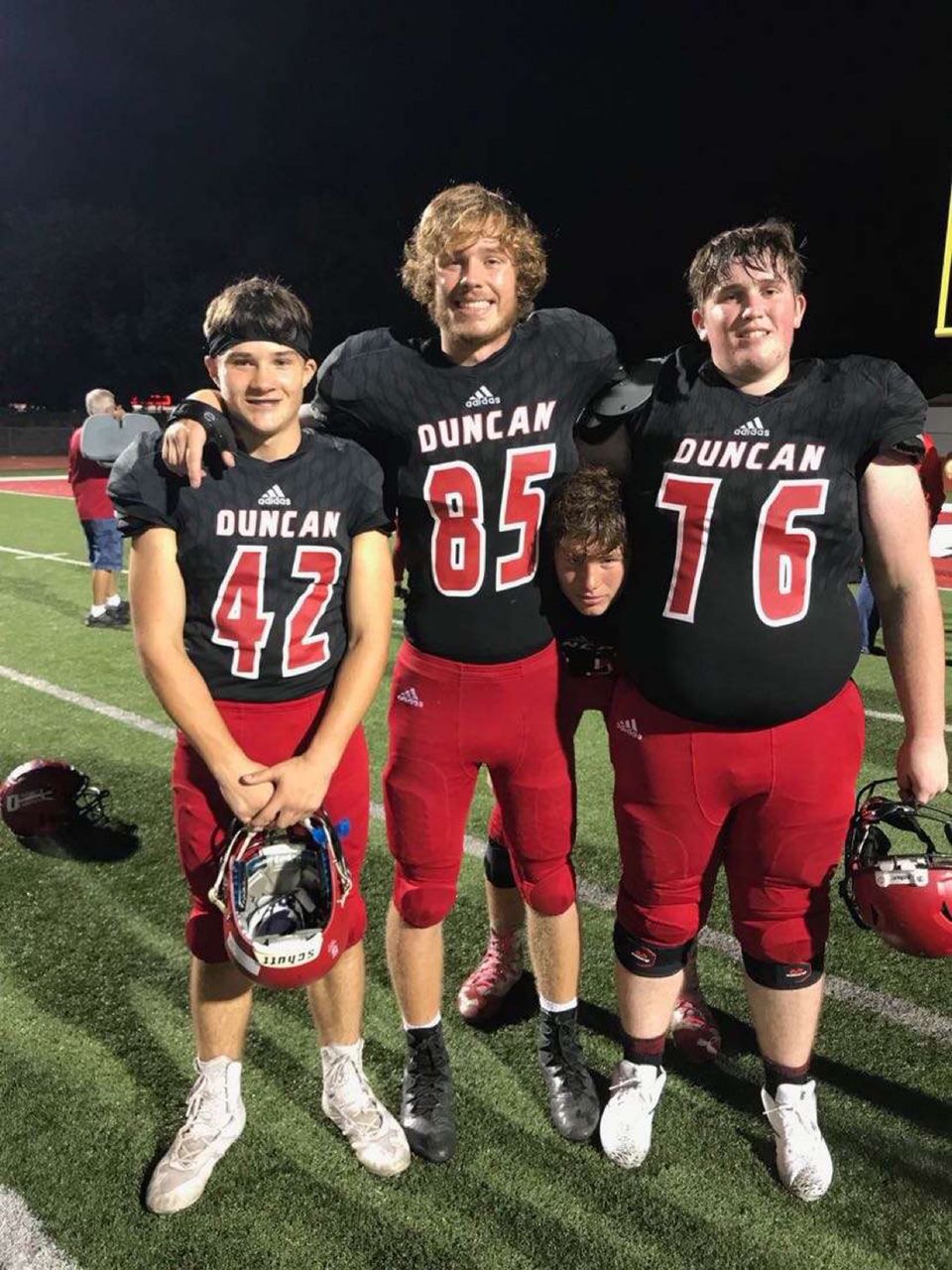 The group at Halliburton Stadium Friday evening released 76 red balloons during a vigil hosted for Thomas Redhead, who suddenly passed away this week.

A solemn event took over Halliburton Stadium on Friday night when a host of Duncan Demons and members of the community packed one side of the stands to remember No. 76 Thomas Redhead’s smile and determination.

Redhead, who would have been a junior this fall for the Demons, passed away unexpectedly on June 26, 2020, and with his family’s permission, students, staff and coaches honored Redhead.

Detective Josh Branch said in an interview with KSWO, the 16-year-old died in an accident at Elk Plaza shopping center last week after falling off the top of a car. Branch said it is unclear if he jumped or slid off the vehicle, but ultimately hit his head, fell unresponsive and was transported to Oklahoma City where he eventually died.

“You can always tell an impact that a kid had on a school, community and a team by how they come and celebrate him,” Cobble said. “I can safely say that he made an impact on a lot of people.”

Cobble said it made his heart whole to see all of the people in attendance to remember Redhead.

“We want to remember the good times and it is okay to be sad and it is okay to grieve but you want to remember the positive things and the good things and the funny things that Thomas brought to your life,” Cobble said. “Football wise, character is huge in that sport and me personally, I can speak to Thomas’ character as I have been here for two years and I have coached Thomas for two years.”

Cobble told the story about how Redhead was on the scout team and said he was someone who loved to play the game and help make his team better by filling his role on that team.

“You don’t do it for personal gain, you do it to make the other players better for the team that we will play on Friday night and Thomas was on that team for two years,” Cobble said. “To me it speaks volumes about this kid. A lot of kids who were on the scout team for two years would quit. They would gripe and quit and wouldn’t come to practice and they would figure out a way to get out of it and he didn’t. He showed up everyday and put his helmet on and came out here and made his team better.”

While he said good character is something he will always remember about Redhead, Cobble also said he will never forget how the whole community tried to honor the student.

“There is a lot of prayers going up for Thomas and his family right now because there is a whole football team, there is a whole school and pretty soon it will be a whole community,” Cobble said. “This won’t be the only thing that is done to honor Thomas because we are going to make sure that he is remembered — as he should be.”

Telling one final story about the time Cobble met Redhead, Cobble said seeing Redhead at a junior high wrestling meet doing anything for his team to be successful will be what he always remembers.

“He hadn’t planned on wrestling, he was just going to go there and wanted to be with his team and this story speaks volumes to his character,” Cobble said. “They didn’t have anyone to wrestle at that weight so they went and asked Thomas and he said without thinking twice, ‘Sure, I will do it absolutely.’ The reason I can tell this story is after it happened, they laughed about it and he laughed about it and at the time it was embarrassing, but afterward they laughed about it. He gets ready to wrestle and at that time, they are wearing white singlets and Thomas gets out there in his white singlet and he was wearing bright orange pumpkin underwear and you can see everything. I don’t know if he went on to win or lose the match but the reason I tell this story is because he was asked to do something for his team and he did it.”

Leading the crowd and family on to the field, the group released 76 red balloons in tribute to the number Redhead wore for the Demons.

Redhead’s service will take place at 11 a.m. July 2 at New Hope Baptist Church West, according to his family, and any memorial contributions can be made to Oklahoma Cleats for Kids in memory of Redhead.