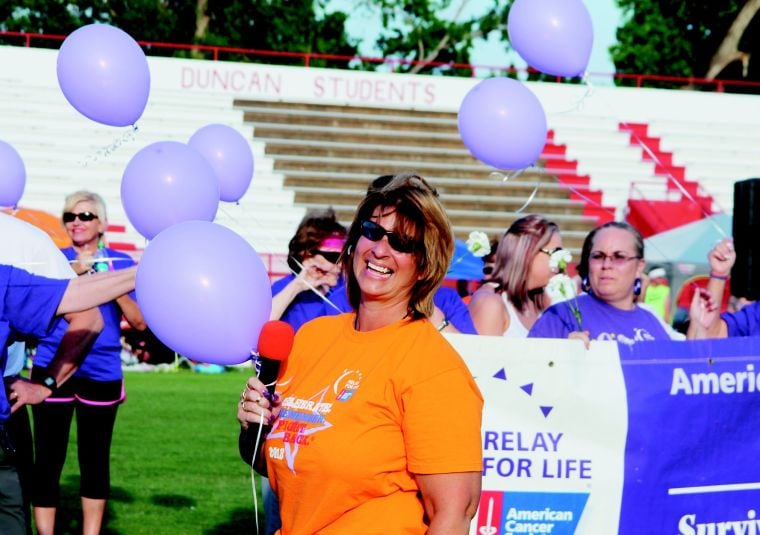 Ronda Rakes celebrates with other cancer survivors Friday during Relay For Life. Rakes was the 2013 event chairwoman of the event. 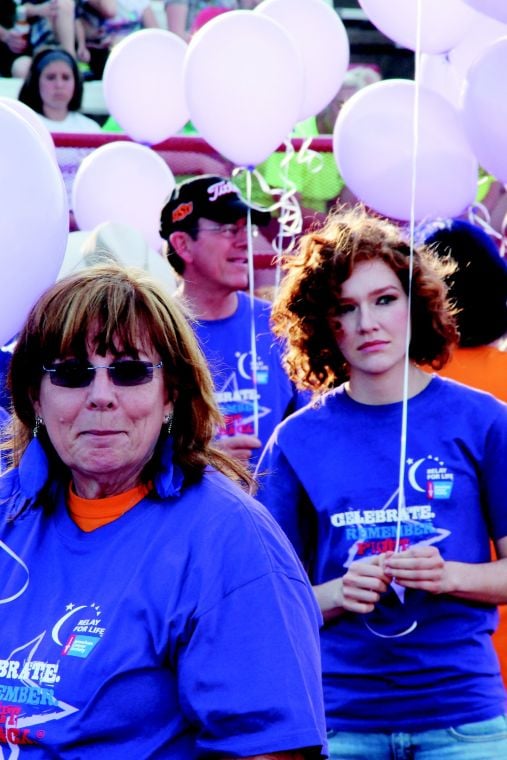 Sandi Phelps and Abigail Smith were among the cancer survivors who walked during the Survivors Lap portion of Relay For Life on Friday.

Ronda Rakes celebrates with other cancer survivors Friday during Relay For Life. Rakes was the 2013 event chairwoman of the event.

Sandi Phelps and Abigail Smith were among the cancer survivors who walked during the Survivors Lap portion of Relay For Life on Friday.

For a night with a few mishaps, Friday’s Relay For Life of Stephens County event soldiered on.
Relay For Life is a fundraising events and campaign for the American Cancer Society. Through the fundraising efforts, funds are produced for cancer research and provide aid to people battling cancer. Each year, Relay For Life also promotes celebrating the lives of cancer survivors.
During Friday night’s event, a few unexpected things occurred. For one, the lights at Halliburton Stadium, which had been turned off for the luminaria service, turned on during the first portion of the ceremony. The lights remained on until the second half began.
And around 12:30 a.m. Saturday, the lawn sprinklers went off, spraying down many of the campsites set up by the various Relay For Life teams. The event didn’t wrap until nearly 6 a.m. Saturday.
But in the closing ceremony, these mishaps weren’t spoken of. Instead, Ronda Rakes, event chairwoman, talked about how great the event had gone and how much money was made toward the $135,000 goal. By 6 a.m. Saturday, a total of $102,047.94 had been made toward that goal.
“Fundraising can continue through Aug. 31,” Rakes said to the people remaining.
Rakes said this year’s remaining crowd might be the most people who have remained throughout the night during the event in several years.
When the event began at 6 p.m. Friday, 30 campsites were set up around the track at Halliburton Stadium, many with on-site fundraisers ready to raise more money for the cause. The 12-hour event started with an opening ceremony led by Rakes.
During this ceremony, Duncan Mayor Gene Brown made a proclamation toward Relay For Life of Stephens County declaring the night for the event. Previously, the City of Duncan had approved a noise permit for the event.
Brown said the people helping raise funds for the fundraising campaign are important and vital to the success of the Duncan community.
“You are all heroes,” Brown said. “You have improved our quality of life in Duncan.”
Following the opening ceremony was the opening lap, which is traditionally done by cancer survivors. For the Survivors Lap, there were 99 survivors in attendance, with Rakes being one of them.
“What we know about people who attend Relay is they want to fight back,” Rakes said.

ADA [ndash] Wanda Lee Brewer, 91, of Ada, Oklahoma passed away Sunday, June 13, 2021, in Ada. Services for Wanda will be held Thursday, June 17, 2021, at 10 a.m. at the Estes-Phillips Funeral Home Chapel, with Bro. Roger Arter officiating. Interment will follow at New Bethel Cemetery. For up…