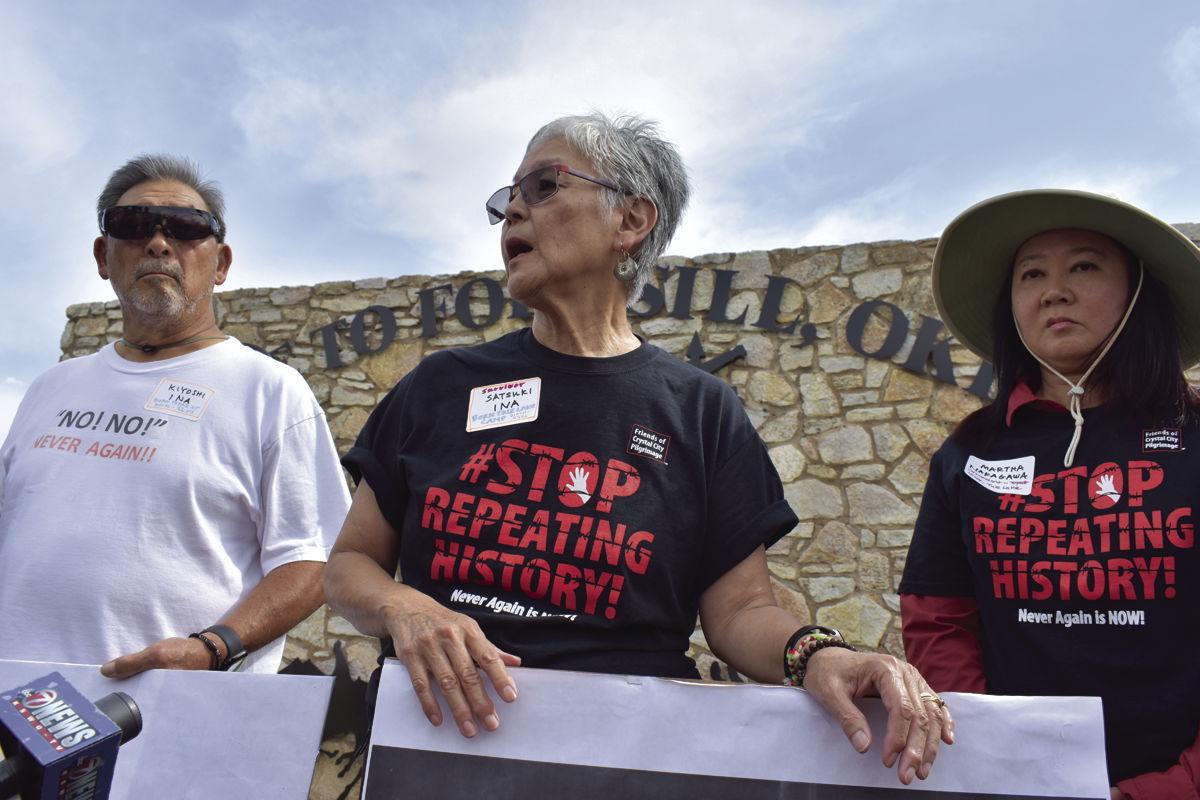 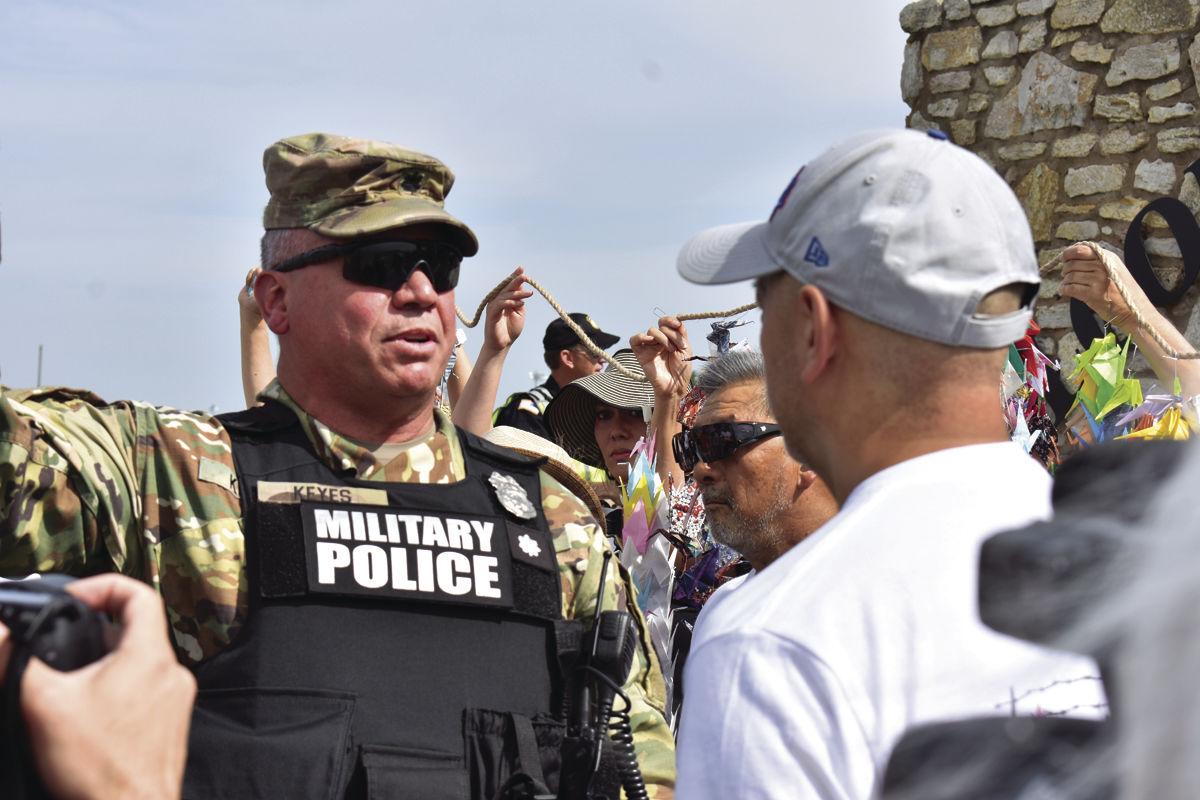 Fort Sill military police officer Keyes and Mike Ishii, Tsuru For Solidarity organizer, stare down after Ishii said they weren’t leaving.
FORT SILL — A demonstration protesting “unjust incarceration” of immigrants ended without incident or arrest following military police’s insistence the event be moved off base property.
Approximately 25 people — World War II Japanese-American internment camp survivors, their descendants and others — planned to hold a news conference outside this Army base near Lawton, Oklahoma.
The group — Tsuru for Solidarity — were protesting a plan to temporarily house up to 5,000 unaccompanied children through Sept. 30.
“Seventy-five years ago, 120,000 of us were removed from our homes and forcibly incarcerated in prison camps across the country,” said Dr. Satsuki Ina, who held a sign with a photo of her as a child in a WWII internment camp. “We’re here today to protest the repetition of history.”
Ina said she was among those held in “American concentration camps” under indefinite detention.
“We were without due process of law; we were charged without any evidence of being a threat to national security; that we were an ‘unassimilable race’; that we were a threat to the economy,” Ina said.
She said those exact words are being repeated today regarding “innocent people seeking asylum in this country.”
“Unlike 1942, when America turned their backs on us while we were disappearing from our homes, our schools, our farms and our jobs — we’re here today to speak out, to protest the unjust incarceration of innocent people seeking refuge in this country,” Ina said.
“We stand with them and we say, ‘Stop repeating history.'"
But as more survivors began sharing their stories, the group’s handlers kept calling out warnings: “They want us to move our cars” and “we have two minutes.”
A military police officer with the last name “Keyes” approached the group.
“Excuse me, ladies and gentlemen, you cannot protest on Fort Sill – if you want to protest you have to go across the street by the highway and that needs to happen right now,” Keyes said. “Let’s go! Now. Today.”
The group continued to share stories — one of FBI interrupting birthday parties, another of a man who was brought to Fort Sill and was shot and killed after being dragged away from his family.
“Apparently you didn’t hear what I said; you need to move — right now, today,” Keyes said again.
Mike Ishii, Tsuru For Solidarity organizer, told Keyes why they were there, and said they weren’t leaving.
“What will happen?” asked Ina.
“I ... I don’t know … I’m not going to arrest you, but you need to move,” Keyes said.
Keyes walked away to another group of officers closer to the Visitor Control Center. Security from the center came out of their building and Lawton Police arrived.
The group continued to share their stories while others held the cranes; Tsuru is Japanese for crane.
Keyes returned shortly and said they needed to leave or get to public land starting at Rogers Lane by the highway. He said they had two minutes to leave.
Ishii said “some people here are prepared to make their statement and be arrested.
“We feel that this is an important enough statement and we want to stand up for the children who are going to be brought here,” Ishii announced. “All of our elders who are incarceration survivors have stated publicly that they are willing to be arrested in defense of the children.”
Keyes cautioned: “You’ve got one minute."
Some people went to their cars.
“What don’t you people understand?” Keyes yelled to those remaining.
“We understand the whole history of this country and we aren’t going to let it happen again,” Ina said.
After much escalation, back-and-forth and threats of arrest, the elders went to their cars and left, with no one arrested.
At the second location, Japanese-Americans, Native Americans and Immigrant Rights advocates joined for a demonstration with healing ceremonies from members of the Lakota Sioux and a Buddhist monk.
Nancy Ukai, another Trusu for Solidarity organizer, said she felt it was her responsibility to her parents, grandparents and other relatives who had been incarcerated.
“Nobody came out to protest and say, ‘This is wrong, they’re Americans and don’t put them in a camp because of their race,’” Ukai said. “So by us showing up, we’re trying to be the advocates that weren’t there for us in WWII.”
Ukai said she was born after the war, but felt it is her responsibility to be here.
“Hopefully get people so upset that they won’t use Fort Sill as a place to incarcerate children,” she said.
But like many others, Ukai said there was no plan on what the government should do with the unaccompanied minors who cannot be housed in the border housing facilities.
“I think it’s complicated, and I’m a citizen, not a politician, but I think there has to be immigration legislation, and be a process instead of just calling everything a crisis and trying to, for example, build a wall or to take money away from the countries that are the source,” Ukai said. “Most of all I think bringing attention to the fact that we don’t want children to be traumatized and separated and put in a prison.
“Then people will find a way, they’ll find a way – maybe it’s by putting pressure on their politicians.”