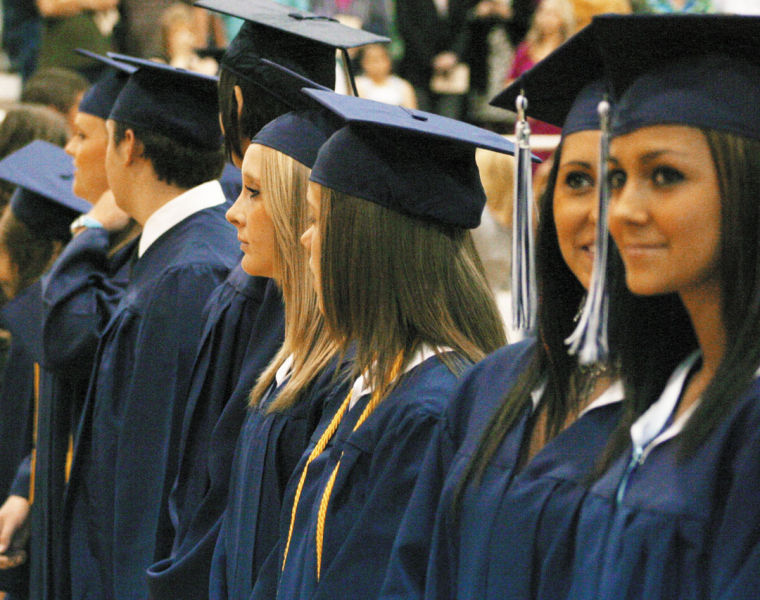 Madison Parsons stands with her fellow graduates Friday while they wait for their diplomas. 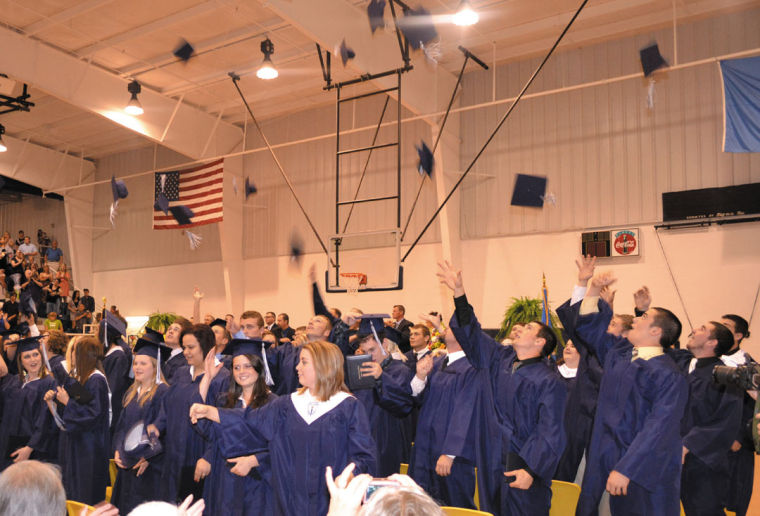 Marlow graduates toss their caps in celebration after being announced as the graduating class of 2011. 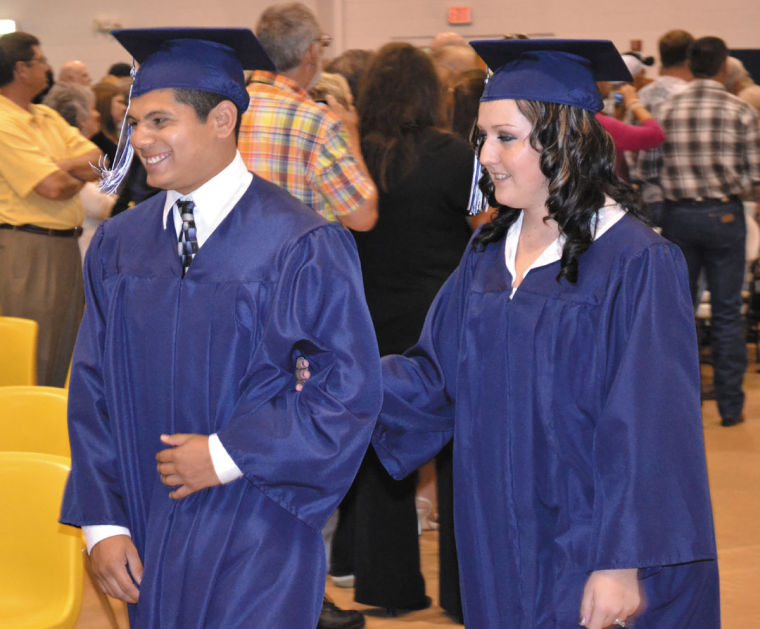 Nick Ellsworth and Samantha Fannie walk to their seats before Friday’s graduation ceremony.

Madison Parsons stands with her fellow graduates Friday while they wait for their diplomas.

Marlow graduates toss their caps in celebration after being announced as the graduating class of 2011.

Nick Ellsworth and Samantha Fannie walk to their seats before Friday’s graduation ceremony.

Friday marked the end of a journey for 87 Marlow High School Seniors.

“We all know why we’re here,” graduate Erica Robinson said in her welcome. “And many of us are just praying to God we don’t trip or fall when we walk across the stage today.”

The class of 2011 said their last good-byes to a school they have called their home, and did their best to encourage each other to look forward and pursue their life goals. But mostly, the night was about remembering the past.

“We have been with the same 80 to 90 people our whole lives in this school, and we’ve become a family,” Robinson added. “Right down to the crazy uncles, we have every aspect that any modern dysfunctional family has today.

“We know us. Our teachers know us, and I know we will go out and light it up like dynamite.”

In her commencement address, Samantha Manke talked mostly about the class’s past, both distant and not so distant. She reminisced about learning to tie shoes with her classmates, playing on the playground, receiving the “dreaded Romeo and Juliet notebooks” and even their most recent class “project.”

“We gathered 30-40 of our fellow seniors in the theater during second period and partied to music and strobelights with glowsticks in hand,” Manke said. “Some teachers didn’t mind, but others were not so happy.

“We learned not to throw a rave on stage.”

Manke even reminded her fellow graduates why there was now a gate in their parking lot affectionately known as “Johannah’s Gate.”

One by one, the Marlow graduates walked to the stage, accepted their diplomas from Marlow Superintendent George Coffman, then again took to their seats.

In her farewell address, graduate Katie Fikes kept her speech brief, per request of her classmates, but still managed to throw in her take on her fellow graduates.

“They told me not to make it all teary-eyed, so I’ll try not to,” Fikes said.

She then recited words of wisdom from “Phineas and Ferb,” characters of a popular Disney cartoon, which included how the class of 2011 might change the world.

“We might build a rocket, fight a mummy or even climb the Eiffel Tower, discover something that doesn’t exist, or give a monkey a shower,” Fikes read. “Because the class of 2011 is gonna do it all.”

ADA [ndash] Jennifer Nichole Hood, 32, of Ada, Oklahoma passed away Monday, October 19th, 2020 in Ada. Graveside services will be at 10 a.m., Saturday, October 24th, 2020 at Rosedale Cemetery in Ada, Oklahoma. Please follow us on Facebook at Estes~Phillips Funeral Home for up to date service…

ROFF [ndash] Services for Jennifer Brenda Kirk, 49, of Roff are 10 a.m. Saturday at the Oak Grove Church, north of Sulphur, Rev. Fred Bailey will officiate. Burial will be 2 p.m. at Fairview Cemetery at Apache, OK. Mrs. Kirk passed away Monday, October 19, 2020, near Wynnewood. She was born …