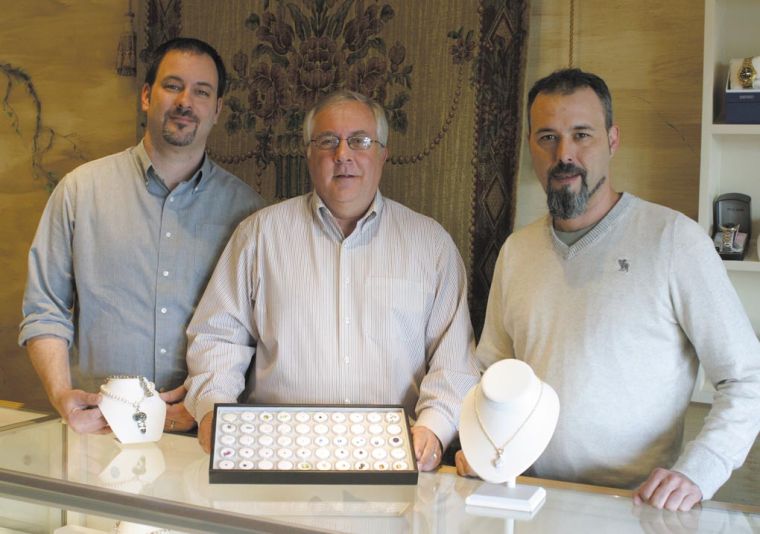 Owner Charles Rucker, center, along with his designer, Drew Cole, left, and son Jason Rucker, display some of the jewelry and jewels in the store. 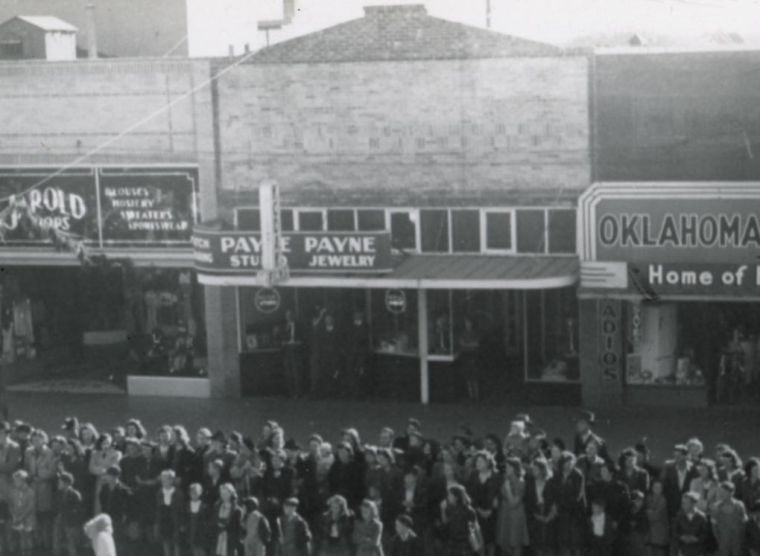 Payne Jewelry during the 1941 Christmas Parade. This is only one of a handful of old photos of the store that are known to exist. 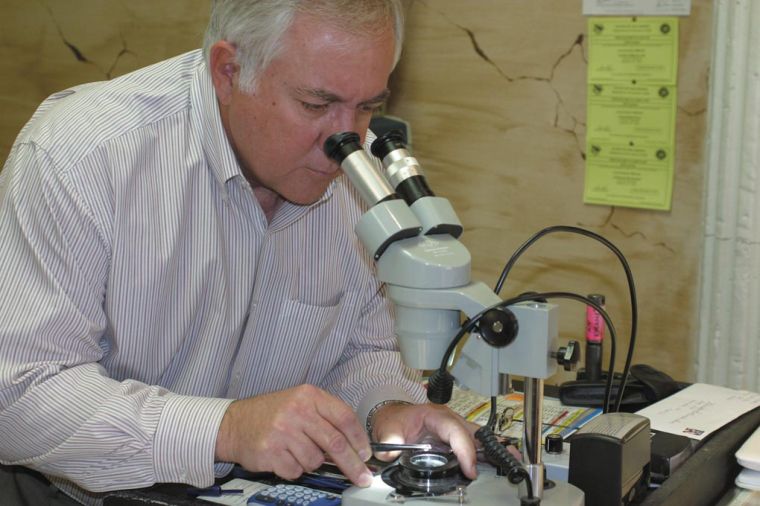 Charles Rucker examines a stone at the his store, Payne Jewelry. Rucker is one of two gemologists on staff at Payne Jewelry, making it the only jewelry store in southwest Oklahoma with two.

Owner Charles Rucker, center, along with his designer, Drew Cole, left, and son Jason Rucker, display some of the jewelry and jewels in the store.

Payne Jewelry during the 1941 Christmas Parade. This is only one of a handful of old photos of the store that are known to exist.

Charles Rucker examines a stone at the his store, Payne Jewelry. Rucker is one of two gemologists on staff at Payne Jewelry, making it the only jewelry store in southwest Oklahoma with two.

Many establishments are lucky to make it a few years anymore in this world. It makes it only that much more impressive when a small town store can withstand 100 years of American history and still thrive. Payne Jewelry will reach that milestone this year as they become one of only 10 businesses in Duncan to reach the 100 year mark. “It’s a very special year for us,” owner Charles Rucker said. “We’ve got a lot planned for this year.” Many of the things planned for the store are special trunk shows with several vendors attending, but what Rucker seems to be most excited about is what he calls a “memorabilia hunt.” Rucker is trying to re-establish the history of the store and learn a little more about where its roots lie and how it came to be one of only a handful of centurion businesses in Duncan. “We’ll have things like the oldest sales receipt and any old photos of the business on the hunt,” Ruckers said. “It’s going to be kind of neat to do.” The store’s past is somewhat hazy in areas. Little is known about how it transformed into a jewelry store, as the original Payne establishment was Payne’s Studio, a photography studio. “I think the jewelry and the photography studio may have gone hand in hand,” Ruckers said. “People shopping for wedding jewelry might need a photographer, and the other way around, too.” The store was located at several places up and down Main Street, and originally had a barber shop in the front of the building. The only way to access the jewelry store and the photography studio was to walk down a long hallway past the barber chairs. The barber shop was destroyed in a fire and essentially, the photography studio as well, but the jewelry remained unharmed aside from smoke and water, so owner Mike Payne moved everything that wasn’t damaged across Main Street into a new building owned by R.H. Brown, who owned half the building. The business remained at this location until Payne sold the store to H. Garber in 1968, and then to Darvis Craig in 1976. When Sue Beall purchased the store in 1978, she, along with her husband, moved the store to its current location in Elk Plaza Shopping Center in 1979. The center was built by Beall and her husband. Rucker bought the store in 1989 with his wife Janet and has run the store since. The store now has a full staff, including two gemologists. Rucker and his designer Crew Cole are certified gemologists and are approved through the Gemological Institute of America (G.I.A.) to appraise jewelry. Payne Jewelry is the only store in southwest Oklahoma to have two gemologists on staff, adding to its already lengthy list of unique capabilities. The store is a member of the New York Diamond Dealers Club, which will allow the store to get diamonds of any size and any cut the next day shipped from New York. Rucker said this allows the store to match nearly any store’s inventory of jewelry. Rucker said he couldn’t run the store on his own though. He credits the current success of the store to his current staff of employees, including Cole and Rucker’s son, Jason. Cole is an Oklahoma Jewelers Association award winning designer, a Jewelers of America “Certified Bench Jewelry Technician” and has a degree in art from East Central University in Ada. Jason has several years of sales experience with other stores, and has moved back to Duncan to help with the business. “We have a combined 75 years of experience between all of us,” Rucker said. With this experience, Rucker said the store can produce almost any type of jewelry anyone can think of. “Someone could come in with a drawing of what they want and we can probably do it,” he said. This amount of expertise, along with the long history of the store, makes Payne Jewelry a staple to the City of Duncan. Rucker said he can only hope the store continues its success and is around for yet another 100 years. — Kevin Kerr is a reporter for The Duncan Banner. He can be reached at 580-255-5354 Ext. 147 or by e-mail at kevin.kerr@duncanbanner.com.