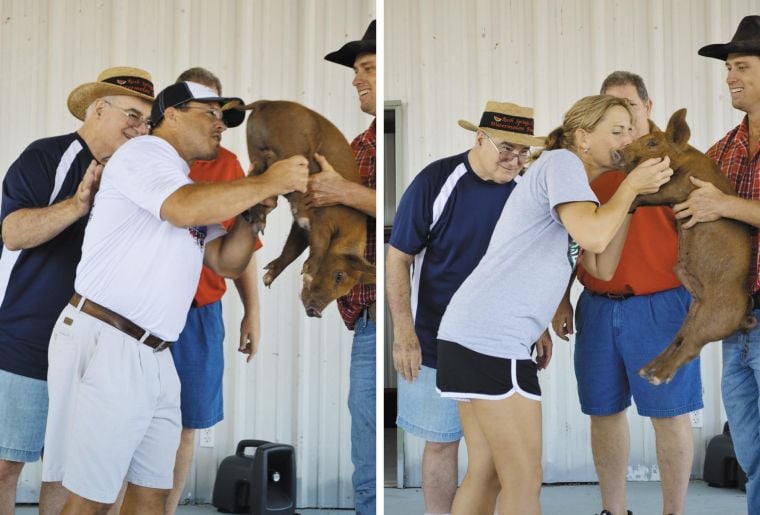 In a memorable moment for the Beard family, at left, Rush Springs football head coach Tim Beard pays the price for losing the pig kissing contest at the Rush Spring Watermelon Festival Saturday. Then his wife Robin, right, got a much nicer spot to buss after winning the contest. 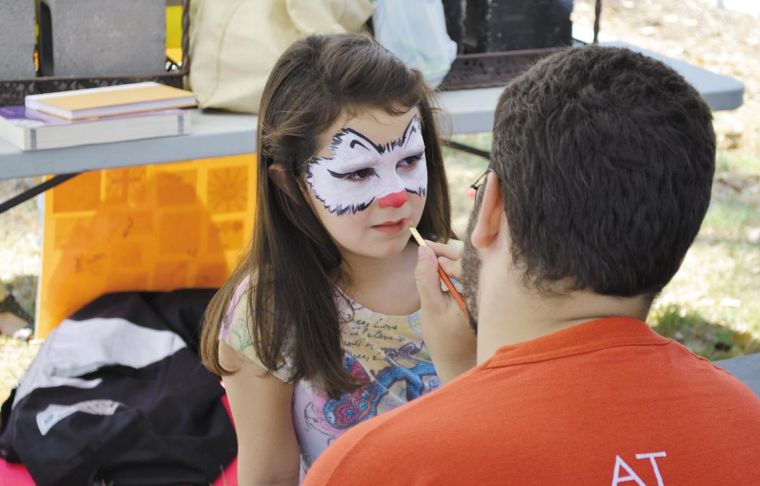 Macy Henry was getting her face painted. 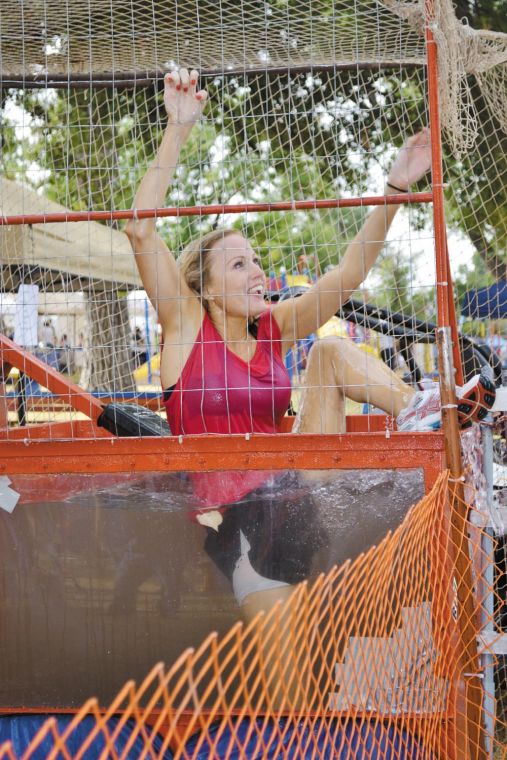 Joleen Chaney was in and out of the water at the dunk tank.

In a memorable moment for the Beard family, at left, Rush Springs football head coach Tim Beard pays the price for losing the pig kissing contest at the Rush Spring Watermelon Festival Saturday. Then his wife Robin, right, got a much nicer spot to buss after winning the contest.

Macy Henry was getting her face painted.

Joleen Chaney was in and out of the water at the dunk tank.

On the morning of the third and final day of the Rush Springs Watermelon Festival, there will contests for all ages, some of which were memorable.

Throughout Saturday morning, jars sat in the “Kiss the Pig” booth, where those attending could drop money in order to “vote” their favorite contestant. Contestants this year included Kyle Jones, Mike Zurline, Joe Dorman, Kim Duke and Beard and his wife Robin.

The Beards entered the contest knowing full well either could be puckering up to a little pig come contest cut-off time at noon. They didn’t expect to both have the “privilege.”

As it turned out, Robin Beard, a Rush Springs elementary physical education teacher and high school cheerleading sponsor, won the contest. Her reward was being “allowed” to kiss the snout of a pig.

However, her husband, who had the least money in his jar, was offered the dubious “honor” of laying a smacker on the pig’s opposite end.

“Let’s just say I’ve done things that are much more fun than that,” Tim Beard said, after laying a kiss on the, uh, “hip” of the pig. “I’m not planning to do it again anytime soon.”

The Tiny Tot contest, the first contest of the morning, saw several young cowboys and watermelon princesses compete to be Little Mr. and Miss Rush Springs. Host Charla Gillelland interviewed each child, who were ages 3 through 5, about their family and how they liked the festival this year. They were then allowed to say or sing whatever they had prepared.

The winners get to travel with the Watermelon Queen throughout the year and participate in parades all over the state to promote the festival. This year’s Mr. and Miss Rush Springs were John Collier, 4, son of Jeanifer and Keith Collier and Lillyan Ball, 5, daughter of Daniel and Lindsey Ball. Collier won the judges over with his sweet nature and Ball delighted the audience with her rendition of “Oklahoma.”

Over on the basketball court at Jeff Davis Park, a different — but well known — contest took place. The watermelon seed spitting contest is a fun activity for all ages and this year there was a large turnout. A couple of local competitors were Amanda Bewley, the 2011 Watermelon Queen, and Emily Sutton, meteorologist for News Channel 4 of Oklahoma City.

One of the contestants, Gerald Hooks, was familiar with the contest. He holds the festival’s watermelon seed spitting record, with a distance of 51’10.” Although the contest continued until late in the afternoon, Hooks said he hoped to be a repeat champion, noting, “I want to break my record again.”

Stefunee Pylant of Lawton had a different motive for entering the contest for the first time. It seems Hooks had registered Pylant to compete and her goal was to beat him.

The annual event continued late into Saturday evening, with much of the crowd anticipating the free watermelon and musical entertainment that was to on the schedule.