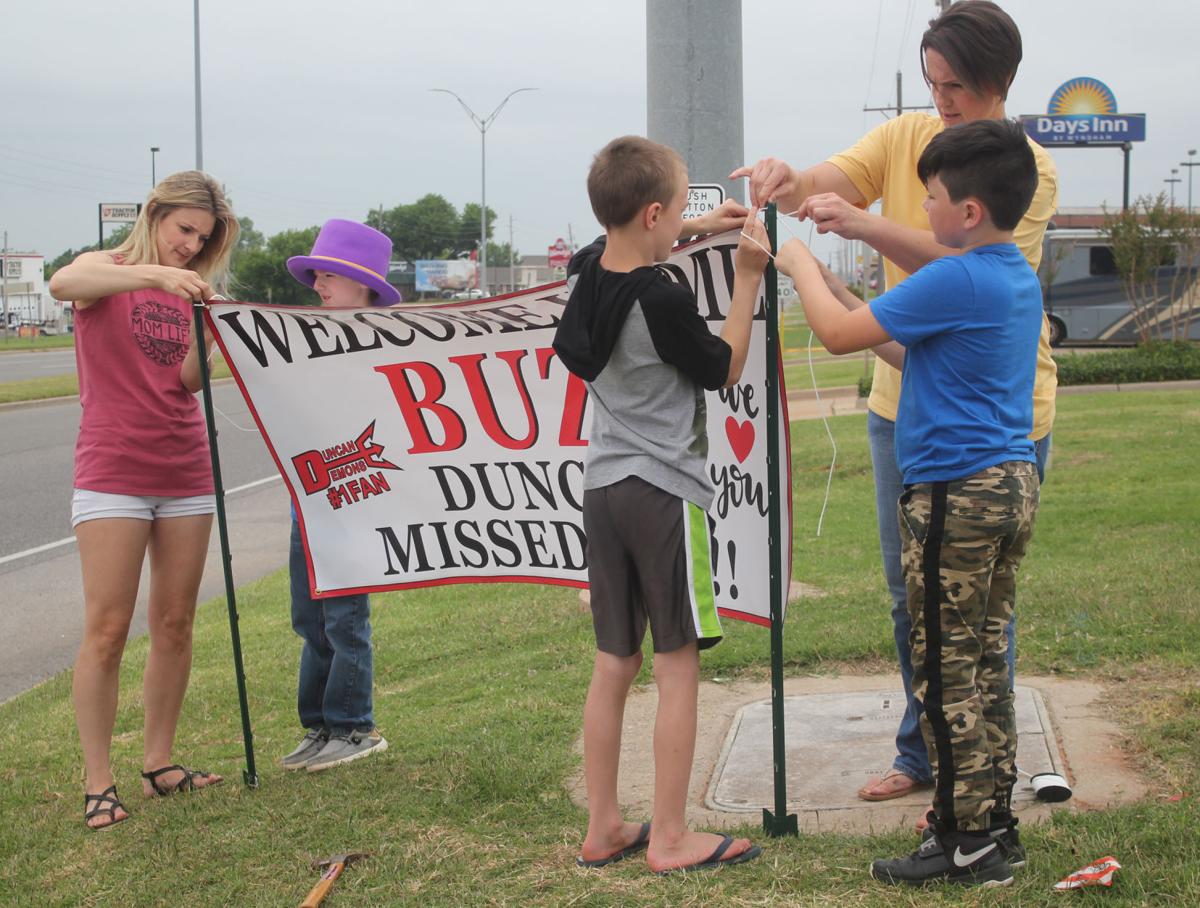 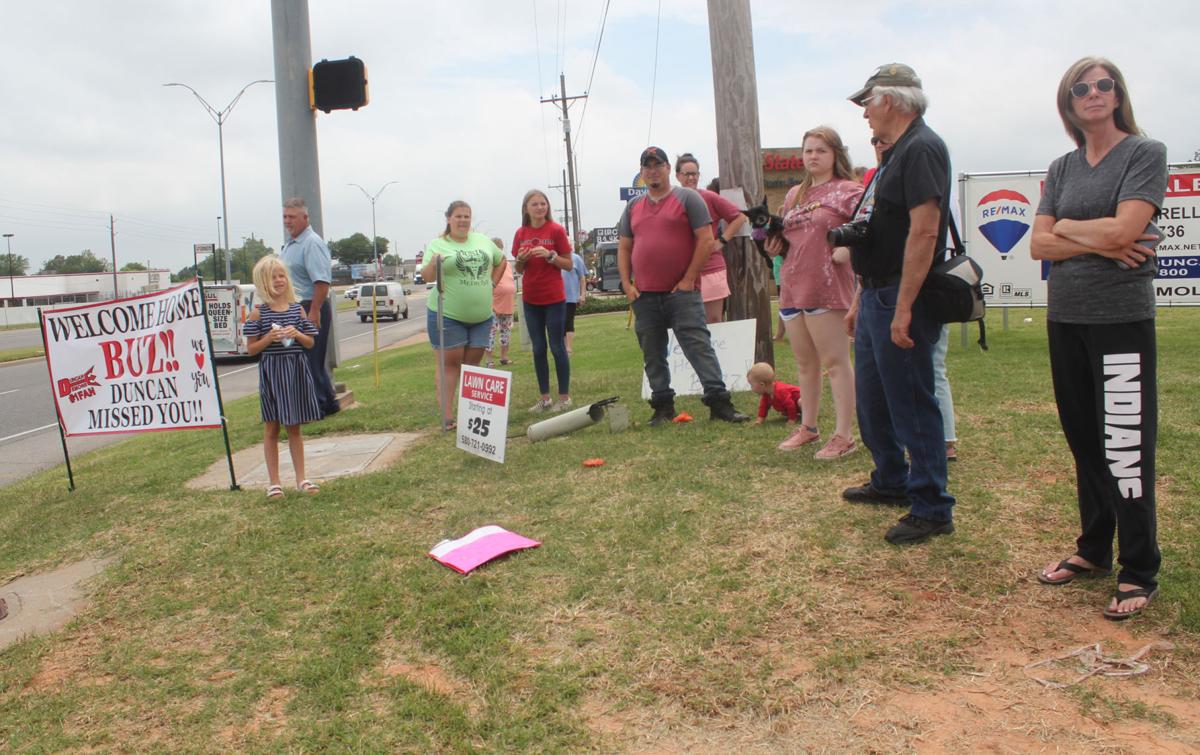 Fans lined up at Highway 81 and Plato Road in front of Rusty England’s office where they waited for Buz Grabman to come by and return home after a couple lengthy hospital stays.

Fans lined up at Highway 81 and Plato Road in front of Rusty England’s office where they waited for Buz Grabman to come by and return home after a couple lengthy hospital stays.

Anyone who has attended a Duncan Demons Football game knows the Demons have a number one fan in Buz Grabman. Buz, after a lengthy medical scare, retuned home to Duncan with his own bunch of fans cheering him along the way.

On April 24, Buz’s mother, Sandra Grabman, said a CT-scan revealed two lesions on Buz’s brain, resulting in him transferring OU Medical Center in OKC so a neurosurgeon could see him for surgery. According to his mother, Buz then returned to the operating room for a second round of surgery. On May 6, Buz came home to Duncan but then returned to OU Medical Center via Medi-Flight after a CT-scan found blood clots in his lungs.

The next surgery went smoothly, according to Sandra Grabman, who said the surgeon removed all the clots. She saw Buz a week ago in Oklahoma City.

In Duncan, news began spreading that Buz would return to Duncan’s Elk Crossing facility. That’s when the community at large organized the welcome parade for his return home.

Sign Dezigns came up with a large sign for Buz after receiving several donations from community members. Amy Green took charge of making the sign, which found its home on Highway 81 and Plato with help from Pamela Dean and her daughter.

Isaiah Alfaro, Canyon Bogle, Brycen Dean, Beka Smith and Reanne Bogle picked up smaller signs and put them in several places around Elk Crossing before starting a campaign to get people to welcome Buz back to Duncan.

At around 1:45 p.m. May 21, Buz’s transport pulled into Elk Crossing and while he unfortunately missed the sign put up, his brother Steve said the staff showed Buz waited on him to come home.

Bus was extremely happy to see that.

Sandra Grabman remembers the crowd gathering for her son. She said having her boy home fills her heart, as well as all of the community support they’ve received.

“I am so amazed and I knew people liked Buz, but I didn’t realize they loved him so much — and so many people, too,” Grabman said. “I have been so awed by this whole thing.”

According to his mother, Buz had a stroke on the left side and even though that affects his speech pattern, she said hopefully speech therapy will help him return to his normal state.

She also said he had weakness on his right side. Sandra Grabman said physical therapy will hopefully help that also.

“I am glad he is out there at Elk Crossing because he is in good hands and he loves it at Elk Crossing so he is going to be happy there,” Sandra Grabman said. “First I want to say Steve, who made it possible for me to go be with Buz the last six days, that was so helpful for both Buz and me. To see that the community is so behind this and welcoming Buz home and asking about him and sharing the posts that Steve makes about him, it is a warm loving feeling and I sure appreciate it.”

Sandra Grabman’s new goal is to see Buz at the first Duncan home game ringing his bell as Duncan’s #1 fan.

“I hope his right side will come back so he can ring that bell again,” Grabman said. “We will see how that goes.”

ADA [ndash] Tom D. Miller, 90, of Ada died Sunday, July 12, 2020, at his home. Services are scheduled for 2 p.m. Thursday at Crosspointe Church. The family will receive friends from 5 to 7 p.m. Wednesday at Criswell Funeral Home.