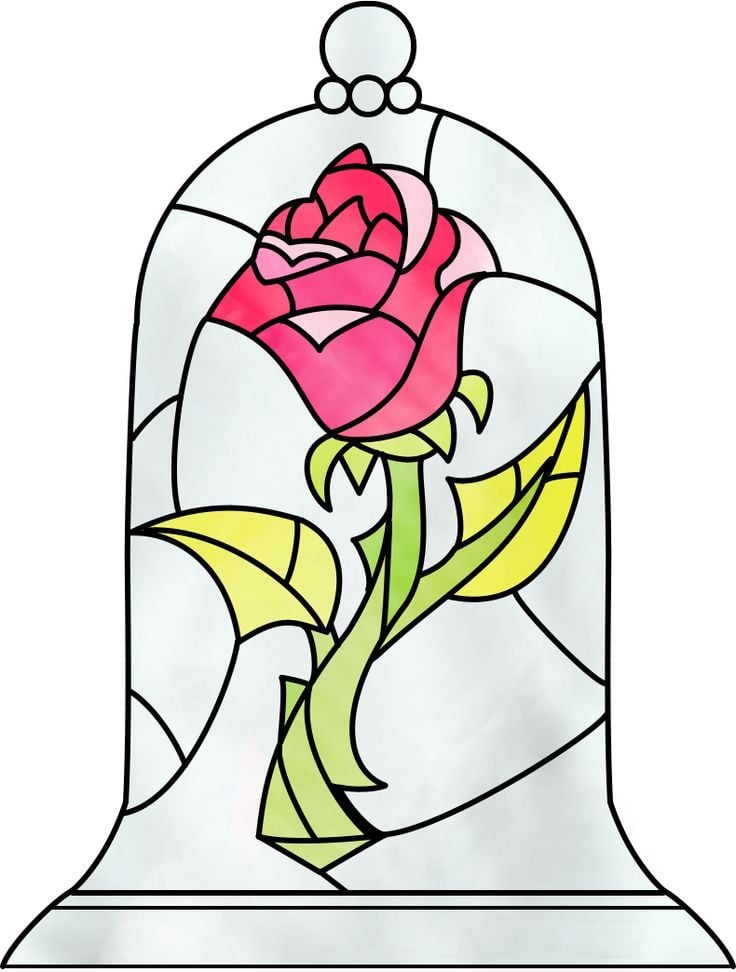 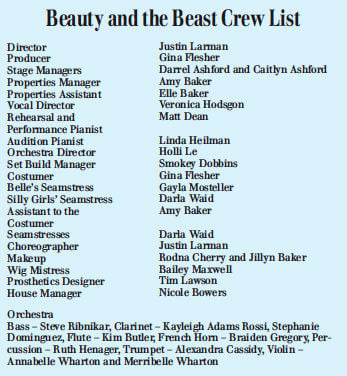 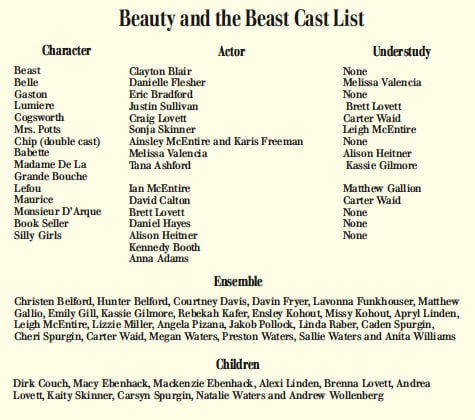 When the last notes of last March’s “Sound of Music” had been sung, Gina Flesher had already started the background work for the Duncan Little Theatre’s February production of the musical “Beauty and the Beast.”

Flesher, who is producer of the show, said the cast numbers where close to the amount for “Sound of Music,” but maybe a few more.

“We have so many characters we need for that giant musical number ‘Be Our Guest’ which is where all the different utensils and kitchen objects all dance to that song,” she said. “They are all humans who have turned into characters, so to speak, and at the end they come back to being human again.”

The costumes for the show are a full scale production itself.

“I thought the costumes for ‘Sound of Music’ where challenging because the children had to have so many and we had double cast all of the roles,” Flesher said. “In this particular show we have these magnificent specialty costumes – Ms. Potts, Chip, the Beast, the Beast’s double, Belle, the silly girls and then all of those utensils – I have four forks, four spoons, four knives, I have a cheese grater, I have a sugar bowl, I have little tea cups.”

Those costumes come from a  specialty company  down in Ft. Worth called “Harris Costumes.”

“I reserved those almost six moths ago knowing the date of our show and wanting no one else to compete with me to get the costumes,” she said.

There are also costumes the normal towns people need which are being made by four of the production’s seamstresses.

Flesher and a friend, who is donating a trailer, will be driving down to Texas to get the costumes around Feb. 5.

While a road trip for costumes seems a bit extreme, this is saving DLT shipping fees. One way was $2,500.

“I can pick them up for less than that,” she said.

Other work to be done is the set which has the village and a backdrop and the piece de resistance the castle.

“We have a huge castle we’re building – it’s 30 feet wide and 15 feet tall,” said Flesher. “It’s going to be a fabulous show, it will be so magical people just won’t believe it.”

The cost of the show is no small feat either.

“It will easily be between 40 to 45 thousand expended on this show by the time we are done,” she said.

To help with the costs there will be a fun fundraiser so children can meet Belle.

“She will be dressed in her beautiful gold ballgown that everyone knows most famously as when she becomes the princess,” she said.

The dress comes with hoops to give it the shape. Also Belle has two wigs, one for everyday Belle and another for princess Belle.

“With their tea fee they are actually getting a ticket to see Belle on stage with all of her friends,” Flesher said.

The adult ticket is only $10

Linda Nelson, owner of The Vine and Fig Tree. is donating the space, set-up and the tea to help promote the show.

“We will also have the magic roses for sale at the tea,” Flesher said. “They are very special. They come from the company that provides us with the magic rose that loses its petals in the production.”

ADA [ndash] Katherine Fulton Preston, 86, of Ada, Oklahoma passed away Monday, Nov. 23, 2020, in Ada. A memorial service will be held at 1 p.m., Monday, Nov. 30, 2020, at the Estes-Phillips Funeral Home Chapel in Ada, Oklahoma. For up-to-date service information, please follow us on Facebook…