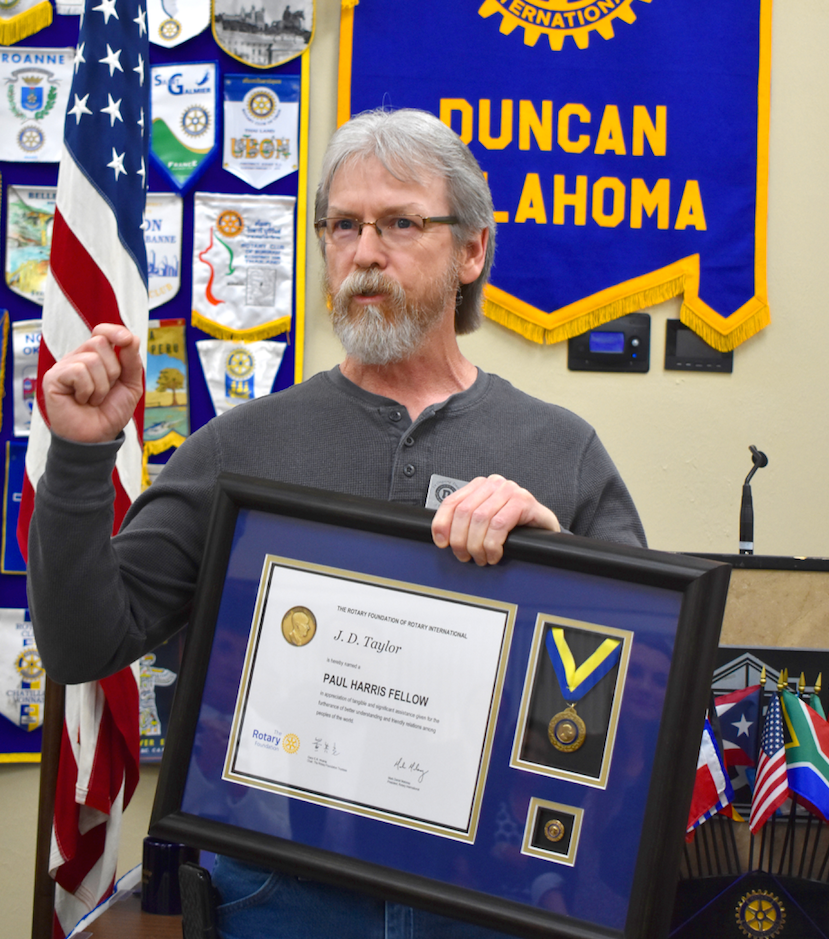 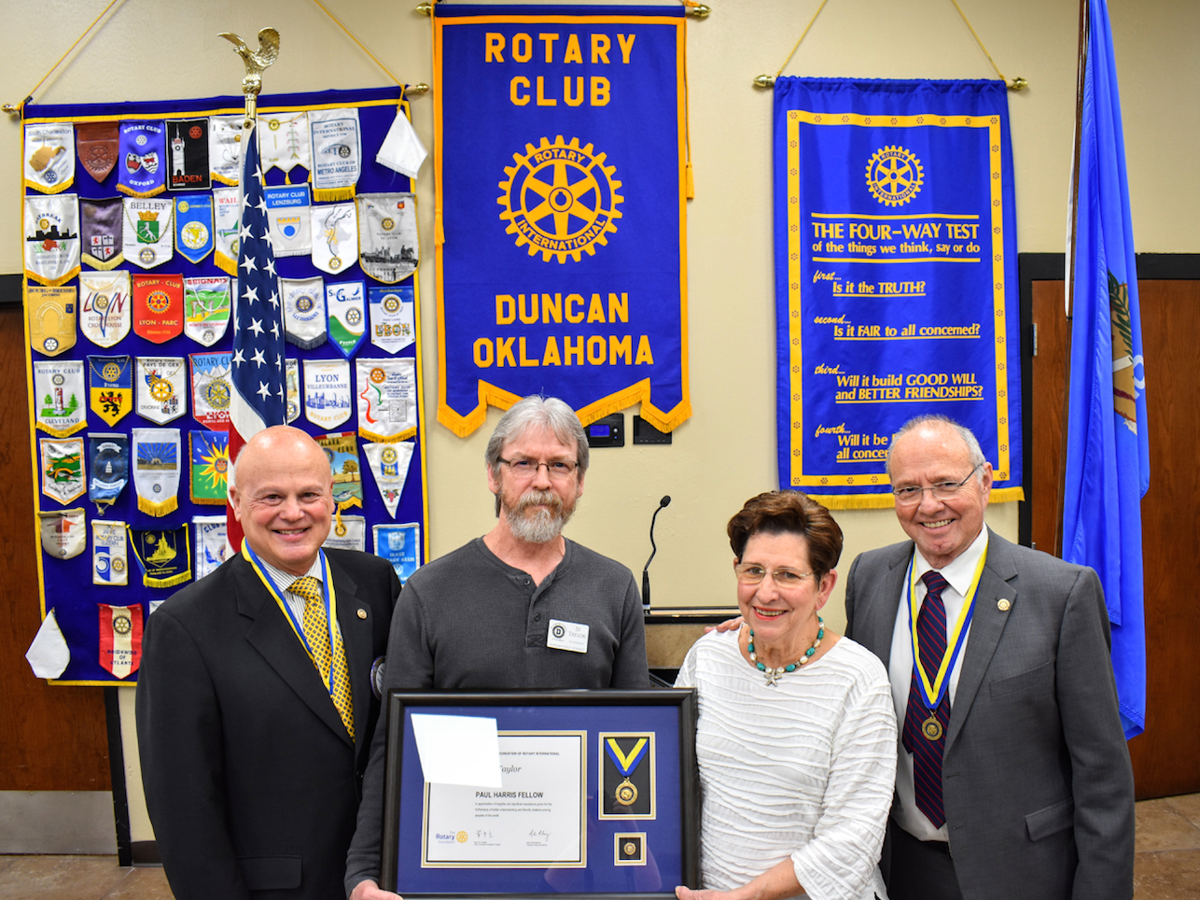 When George Sherrill first stood up during a meeting and challenged his fellow Rotarians to donate more to the Rotary International Foundation (RIF), he had no idea what would grow from that challenge.

Rotary members who donate a certain amount in a year can become Paul Harris Fellows (PHF), and thereby help the RIF with the ongoing missions to eradicate polio in the world, provide clean water, education and more.

Hal Pennington, Duncan Rotarian and this year’s District Governor, explained for those who didn’t know Sherrill before he passed away why it was important to the club.

“George stood up back there and discussed the need for our club to become more active in donating to the Rotary Foundation,” Pennington said.

Sherrill, he explained, believed in the RIF’s sustainable humanitarian service projects which not only help with immediate needs like clean water but also help the local economy by creating jobs. Also thanks to the PolioPlus effort, 99 percent of all polio cases have been ended through the vaccination program.

Sherrill hoped to get Duncan to be a 100 percent Paul Harris Fellow Club in five years and the club only has 12 members left working toward the goal.

When Sherrill passed away, he set a way for his wife Kathy to honor someone — anyone who helps make Duncan a better place — by donating in their name. Kathy was unable to attend this year and sent friend Susan Lindley to carry out the honors in her stead.

So the program first had first-time PHF pinned and those included Rex Outhier, Larry Benson and Sheila DeCarlo, who was unable to attend.

This year’s club president, Dr. Mike Nelson, was also pinned with the traditional outgoing president PHF. Nelson continues to serve as president for the next few months.

Lindley took the podium and started to describe the honoree, without “giving up the game.” Lindley said it was hard while trying list their accomplishments.

“I am glad and honored to represent Kathy today,” she said. “The person we are honoring today has been living in Duncan for a very long time. And is pretty well-known and has done a lot of things that you all have seen, I’m sure. I have incredible respect for this man  because I am a technical illiterate — what other word is lower than illiterate? (I’m that),” she laughed.

Lindley gave some big hints. The honoree, according to Lindley, could be seen while involved in Football or visiting any Duncan Public Schools (DPS) building and is in charge of all the technological aspects of DPS.

“Sometimes after hours he helps other people — he helped me at my church,” she said. “And Kathy (when) she was at Red River … he helped her and she said, ‘He always did it with a smile.’ And he … he always did that for me too and the other thing I would say about him — he never talked down to me.”

The man of the hour was J.D. Taylor, who was also lauded for his countless hours getting the Rotary Christmas Auction on air for many years, all while being a little protective of the camera.

Taylor, after receiving his PHF, said a few thank you’s but highlighted community.

“When I look around this room I see the power of Duncan, you know, it takes all of us to make it work,” he said. “When we all work together — it works, it’s not just one individual, it’s the power of us all and as long as we stand together, as long as we work together and we continue with the progress that Duncan is building, that power is just going to keep getting greater.”

AFTON [ndash] Services for Lana Mayer Wyche, 74, of Afton and formerly of Ada are at 11 a.m. Wednesday at the Criswell Funeral Home Chapel. The Rev. Larry Hawkins will officiate. The family will receive friends from 6-8 p.m. today at Criswell Funeral Home. Mrs. Wyche passed away Saturday, Fe…