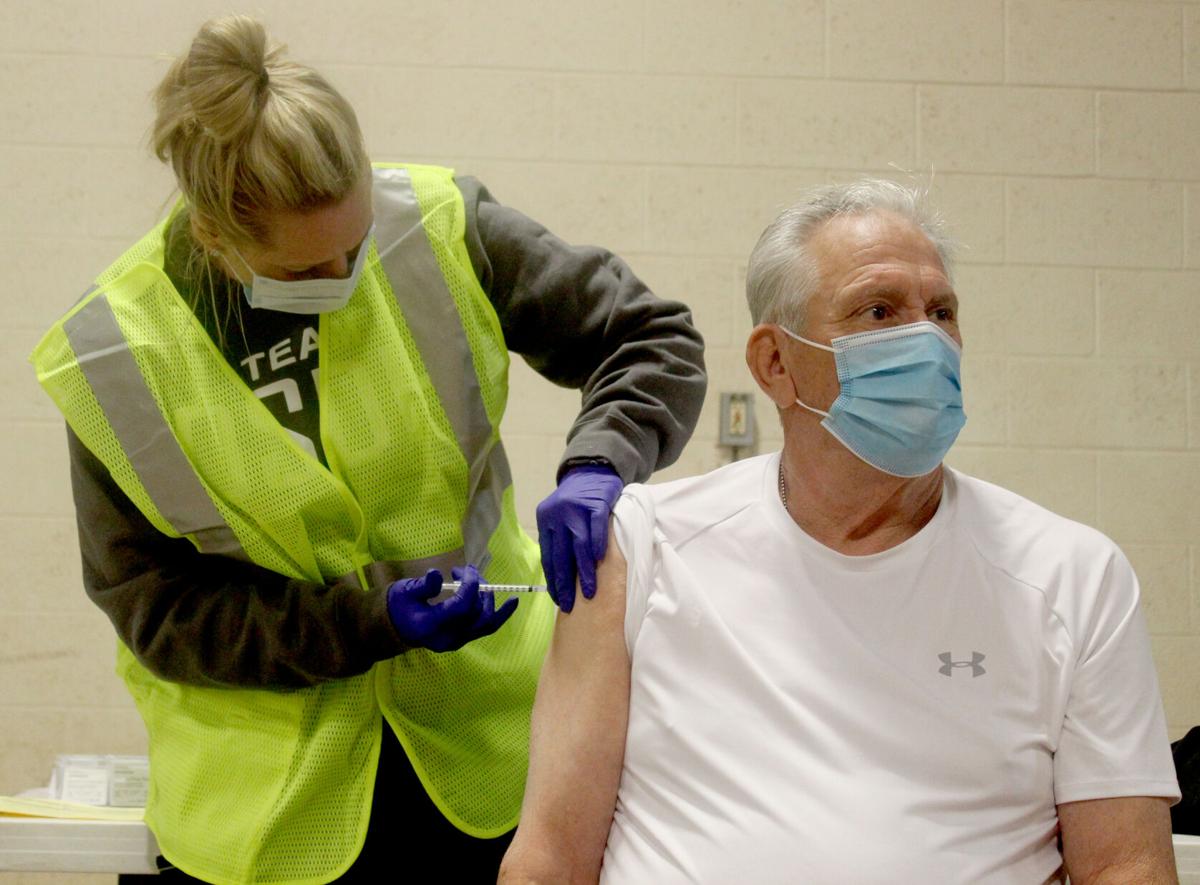 Members of the National Guard help flow traffic into the Stephens County Fairgrounds on Thursday afternoon during a vaccination clinic. 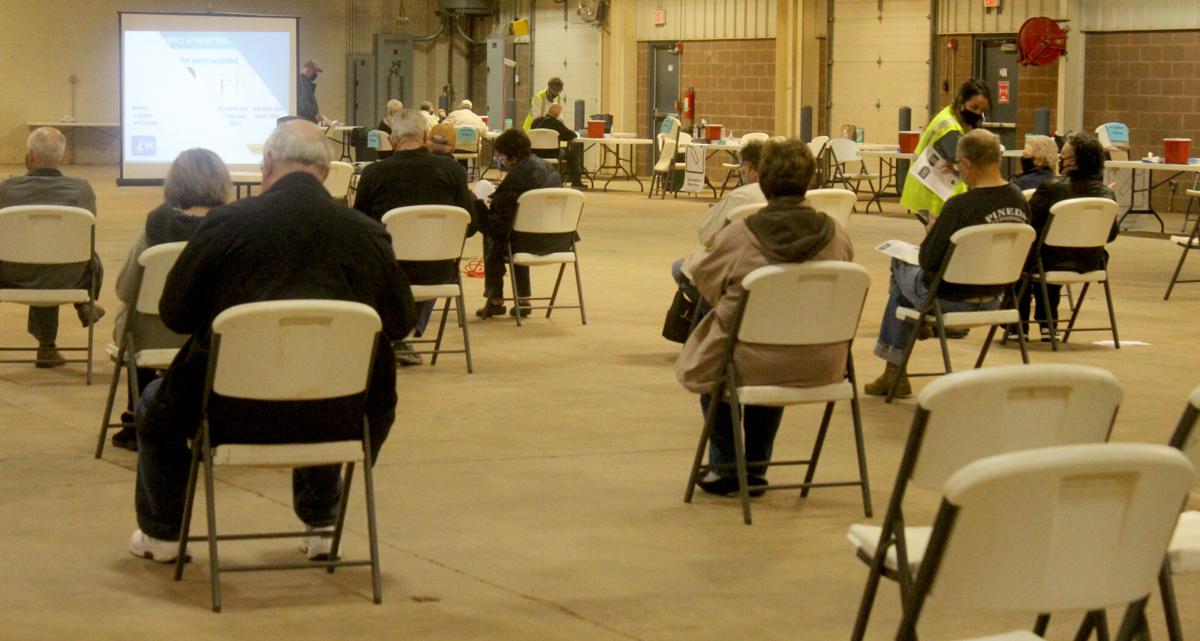 Members of the National Guard help flow traffic into the Stephens County Fairgrounds on Thursday afternoon during a vaccination clinic.

A team of almost 100 health professionals and volunteers converged on Duncan’s Fairgrounds Thursday where they administered over 1,300 COVID-19 vaccines in the first large scale clinic hosted in Duncan under Phase 2 of the vaccination plan.

That vaccination total averages the same amount of shots given out at events hosted in the last week in different parts of District 8, which includes Stephens County, according to Julie Williamson, Public Information Officer with District 8 of Oklahoma State Department of Health (OSDH). District 8, which also includes Carter, Garvin, Jefferson, Johnston, Love, Marshall, Murray and Pototoc, saw almost 650 administered last Thursday in Ardmore, another 1,100 on Tuesday in Ardmore and over 1,300 on Wednesday in Ada.

The event, which will now take place at the Stephens County Fairgrounds each Thursday in January, ran from 10 a.m. to 6 p.m. Williamson said a large surge of people wanting the vaccine under Phase 2, which currently includes emergency personnel and those 65 and older, came to the clinic early in the morning.

“We’re doing these big events every week in Ada, Ardmore, Duncan,” Williamson said. “The rest of the time we have nurses going out on strike teams to vaccinate at nursing homes, assisted living, group homes for developmentally disabled. We can go into facilities that are not covered on that CMS contract with CVS and Walgreens.”

Traffic flowed into the fairgrounds from the southern end and the National Guard was deployed to assist District 8 with traffic control. When pulling up, those in the car were asked if they have an appointment, screened and are then directed where to go.

“A lot of people printed their own (appointment schedules) from the website,” Williamson said. “People who are coming in, if they don’t have an appointment they have a colored paper, that’s the registration form, it’ll have a time for them to return, so when it’s their time, they’ll come back, then they’ll come on in and they’ll take care of it from there.”

The Jan. 7 event allowed for walk ins, however, future events will all rely on appointments from the vaccine portal on OSDH’s website.

“Now we know there’s a lot of people who can’t navigate that,” Williamson said. “We’re hoping that friends, family, neighbors will help. We’re working on plans to keep some lists of people that we can try to get them in another way. The portal only lets us schedule 20 shots every 15 minutes … We’re still working through all that. As it stands right now, every week we’ll make an announcement on Thursday or Friday about events the following week, because that’s when we’ll have an idea on numbers.”

Because everything is being made available online, there’s a concern for the elderly population who may not be able to navigate the site or may not have access. In Pontotoc County, the United Way and emergency management teamed up, according to Williamson, to compile a list with contact information for people who are medically fragile, homebound or not able to attend events. She said community help like this could be used locally to help ensure those who want the shot get it.

Duncan’s physical event took place in the main arena of the fairgrounds and included volunteers from the Health Department, DRH and some Medical Reserve Corp volunteers. The Health Department also pulled nurses from all across District 8, including Madill, Marietta, Carter and Marshall Counties, to name just a few.

In the lobby of the building, student volunteers studying health related fields from Red River Technology Center helped check in those with appointments and directed walk ins where to go. They also tracked who kept their appointments to tab how many no-shows there were to try and free up more spots.

From there, patients flowed through to the vaccine stations, which were all socially distanced and spread apart. The station included where the person receiving the shot would sit, and six feet away from that sat another singular chair, where the next person waited in line. Nurses with the Health Department administered the shots. After receiving the vaccine, they went to the third station, observation, where they remained for 15 minutes — or 30, depending — per standard procedure.

“The recommendation given to us was to watch for 15 minutes just to make sure people aren’t going to have a reaction, and if they do we have EMS on site that will take care of it. We haven’t had a lot of reactions, there’s only been a couple around the state, but it’s just to protect everybody. Standard procedure. They get a sticker on their shoulder, it’ll give a time that they’re released. So once they do the shot, they’ll have to go 15 minutes out, or 30 minutes if they’ve ever had a reverse reaction or had some allergies,” Williamson said. “They’ll get their release time on there. We’ve got observers checking on people. And then when it’s their time to go, they check them and then they exit.”

While they wait during their observational period, an information video from the CDC with a voice over from Oklahoma State Department of Health plays, explaining the side effects of the shot that are normal.

“It means your body is working, so you might feel sick for a few days,” Williamson said. “Can be a pretty high fever for some people. Headaches, fatigue, some people have some nausea. Some people have nothing at all.”

Pain or swelling in the arm, fever, chills, tiredness and headache are all symptoms that can be experienced, Williamson said.

“Those are normal no matter which of the vaccines you’re getting,” Williamson said. “I know a lot of people have said they’ve heard one or the other is worse. From what I’ve seen it doesn’t seem to be that different. I haven’t heard of anyone feeling sick for more than a couple of days at the most. If it goes more than that, it’s more than likely you’ve got something else going on.”

When they leave, the patient receives a vaccination card with a date on it. The date is when they need to get their second dose. Williamson said 28 days from now, there will hopefully be more access points, which means some people will hopefully get to see their provider or an urgent care or a pharmacist, which will provide some relief to the Health Department and also help those who may not be as tech savvy in navigating the portal.

As far as booster vaccinations for those who took the vaccine already, there’s no firm appointment scheduled yet, but it’s coming.

“We can’t schedule anything far out, we can’t schedule their second dose yet, because of the numbers we’ll have available — so that’s going to be week to week. I know that’s aggravating to people,” she said. “For the people who are needing their second shots, the shipments are coming on automatic second shipments, so if we got 1,000 Moderna doses this week, then it’s going to be set in 28 days, it should just send the other 1,000 for that. So there will be enough vaccine, but they’re not going to be already scheduled an appointment … We’re looking at ways to maybe reserve part of the time for those doing it with their second dose and part for the first doses. We’re learning this new system along with everyone else because we didn’t have any access.”

The clinic also had mental health professionals on site to assist if someone presented with anxiety or needle phobias and flagged for help.

“Some people have been pretty emotional — this has been a long, stressful ordeal and then there’s just kind of this release where it finally feels like we’re getting somewhere,” Williamson said.

Amelia Mattson, a behavioral health clinician from Carter County with District 8 of the Health Department, said they had someone Thursday who needed a little help to get through.

“We had somebody who was kind of scared to be in a crowd because he hasn’t really left his house in a long time and so I was able to help with that and kind of help him arrange in his waiting area in a place where he felt safe,” Mattson said. “We’ve had an overwhelming response today. I’m just so happy to be here and help.”

Williamson said patients weren’t the only ones feeling a sense of relief as the vaccine distribution takes place.

“I think on Thursday when we did our first event in Ardmore, a lot of the staff was pretty emotional because it just feels like the light at the end of the tunnel, that this is our way out,” she said.

Those who have COVID-19 or are showing signs and symptoms should not attend the events.

“We absolutely do not want anyone here if they are currently positive or if they are under quarantine,” Williamson said. “People who have already been positive and recovered, the recommendation is to wait 90 days to get the vaccine because there’s an expectation they probably have natural immunities, so somebody else would benefit more from the vaccine more right now. We’re not making that a hard and fast rule, it’s a recommendation … We do also really encourage the people that are in the recovery period, if they test positive for the antibodies, to look into their eligibility to donate plasma because that has really helped people in the hospital.”

DRH Health also hosted a vaccine clinic on Friday, Jan. 7, which filled up as of Tuesday. DRH will host another clinic as soon as they confirm they have more vaccines available.

Details from Stephens County Health Department on the Thursday, Jan. 14 event have not yet released. The Banner will provide more information when it becomes available.