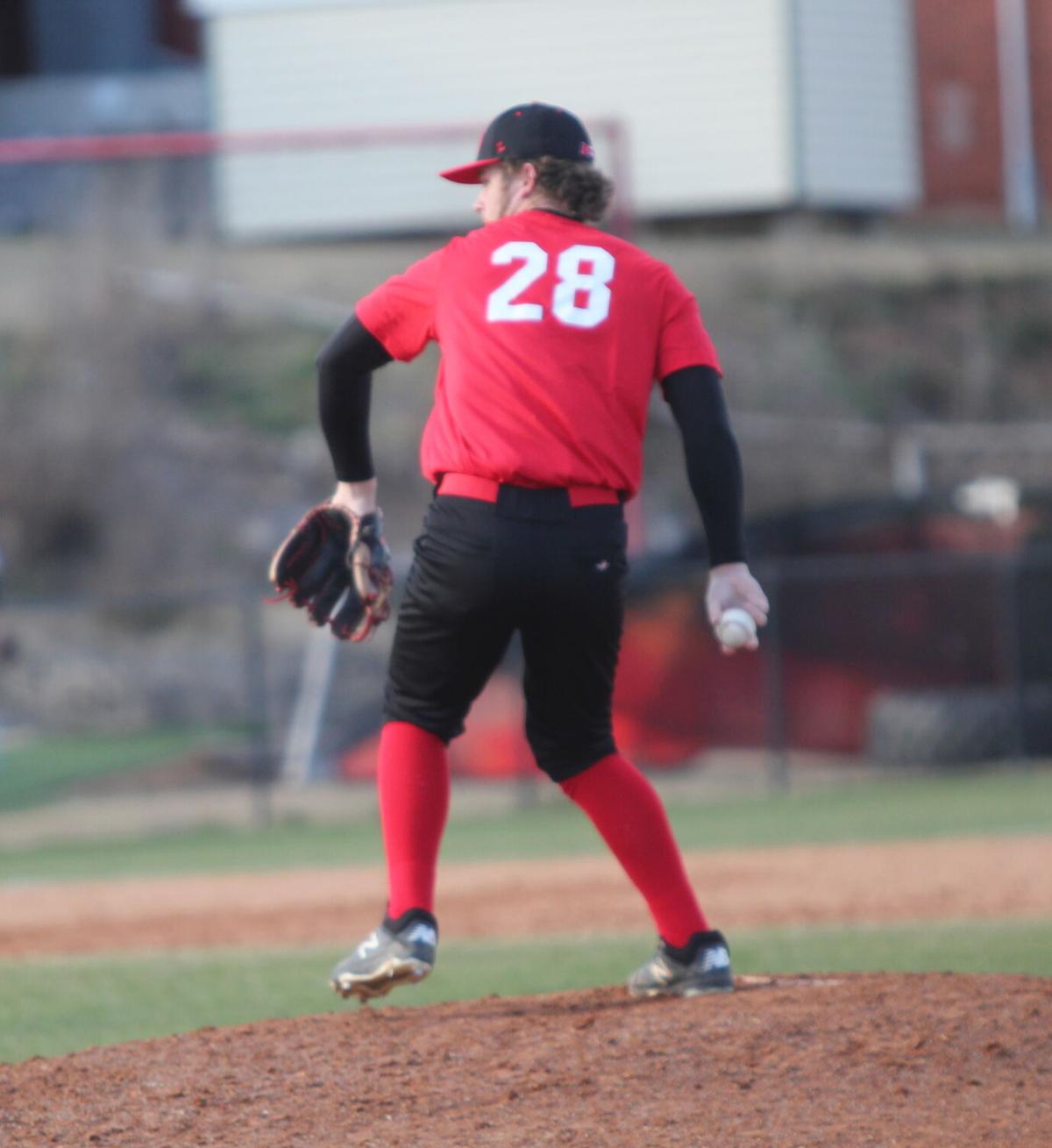 Jackson Attaway pitches in a scrimmage earlier this season. He threw a perfect game this past Thursday against Ada for the victory for the Demons on the mound. 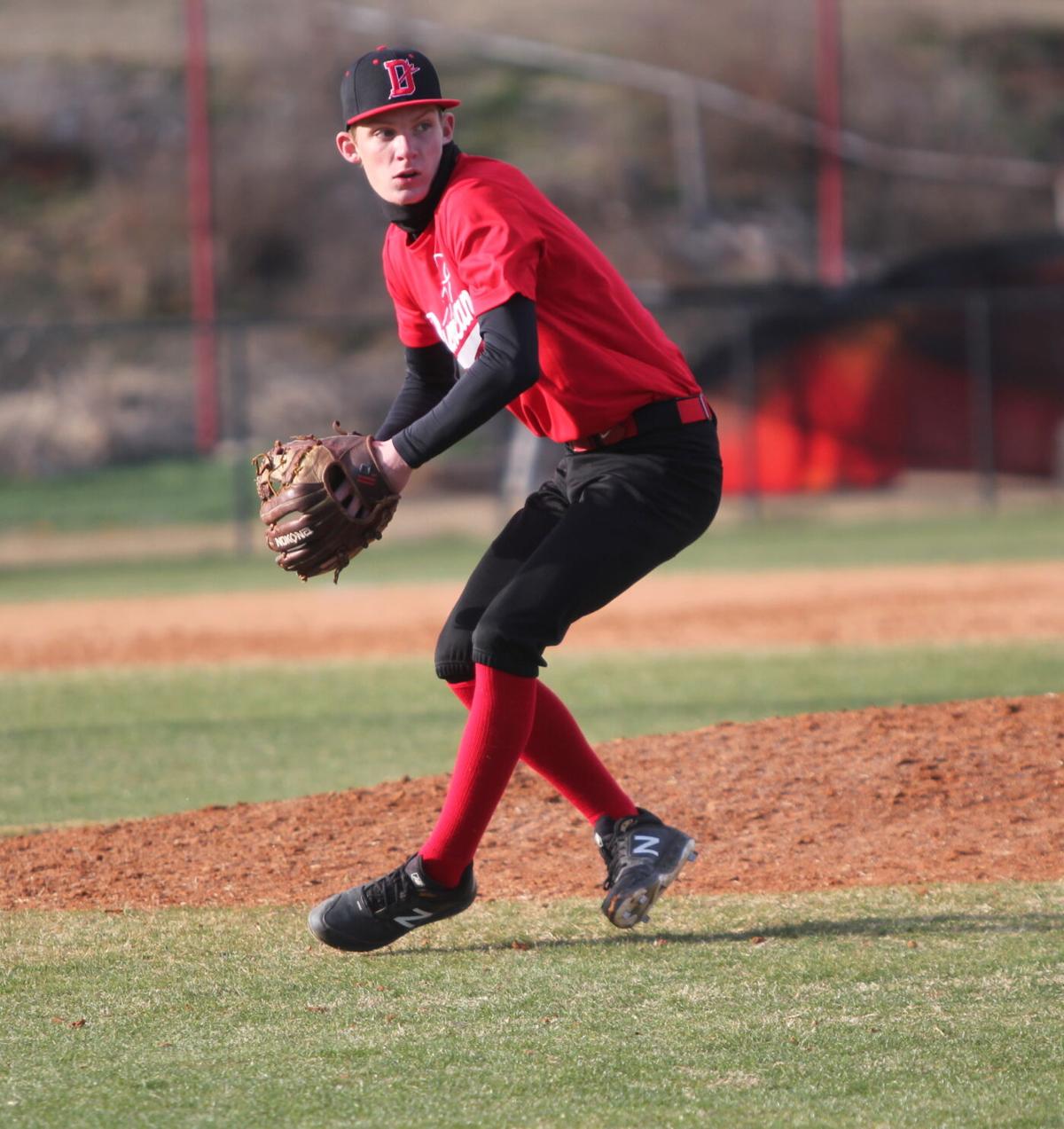 Fielding the ball earlier this season, Craig Holt was one of the defensive keys to the perfect game against Ada for the Demons this past week.

Jackson Attaway pitches in a scrimmage earlier this season. He threw a perfect game this past Thursday against Ada for the victory for the Demons on the mound.

Fielding the ball earlier this season, Craig Holt was one of the defensive keys to the perfect game against Ada for the Demons this past week.

In the most recent home game, the Duncan Demons’ baseball team saw perfection from one of their pitchers as Jackson Attaway threw a perfect game in recent victory to beat Ada 5-0.

Both teams battled to a 0-0 tie in the first inning with the first bit of runs coming in the bottom of the second after Attaway helped contribute to the first six outs of the game for Duncan.

The first rally in the bottom of the second started after a double play and two outs in the inning when senior Jake McKinney hit a single and Kenny Garland joined him with a single of his own.

Another senior for the Demons came up to the plate with Tate Wilkins hitting a single to drive in McKinney to take the 1-0 lead over Ada.

Bryson Brooksher came up next for the Demons and not waiting for multiple pitches, took the first one he saw and hit a line drive single to right to score Garland and give Duncan the 2-0 lead.

Attaway came back out for the next inning and struck out the first batter and then forced two ground ball outs to keep the lead at 2-0 heading to the bottom of the third inning.

Despite getting two base runners on in the bottom of the third, Ada made it out of the inning with no runs against them with the Demons leading 2-0 at the end of three innings of play.

In the top of the fourth, Attaway struck out the final two batters and a ground out kept him at 12 straight batters retired. Offense looked to help him out a little more in the bottom of the fourth.

Wilkins hit a one out single and then stole second base during Peyton Roberson’s at bat and then advanced to third on a wild pitch before Roberson walked to put runners on first and third.

Hunter Prince came up to bat and only needed one pitch to take care of the two runners and himself as he hit a home run over the left field fence to make it 5-0 in favor of the Demons.

Attaway made it 15 straight outs with a ground out and two fly outs.

Attaway got a fly out to Craig Holt and then a ground out to Brooksher before the final batter came up to face the Demons with one out left for perfection.

Only needing one pitch, Ada got a hard hit to McKinney at second with him catching the ball to complete the perfection bid and the victory.

Pitching all seven innings, he had six strikeouts throughout the game and put the Demons at 4-1 to begin the season.

It was a quick turnaround for the Demons as they faced Carl Albert the next day and lost 8-1 to the Titans on the road.

The only run came on a ground out from Brooksher to drive in McKinney and put the Demons at 4-2 on the season.

Duncan’s next game will take place at 7 p.m. March 15 in Oklahoma City at Bricktown Ballpark against Hennessey. Results from that game will publish in a future edition of The Duncan Banner.

ADA [ndash] Graveside services for Roger Kenneth Johnson, 68, of Ada, are 2:00 p.m. Wednesday, January 26, 2022, at Highland Cemetery in Stonewall, Rev. Steve Wilburn will officiate. The Chickasaw Honor Guard will conduct military honors at the cemetery. Visitation will be 5:00 - 7:00 p.m. T…

ADA [ndash] Weldon Fulsom Services for Weldon Lee Fulsom, 72, of Ada are 2:00 p.m. Tuesday, January 25, 2022 at Sandy Baptist Church in Sulphur, Pastor Kadesh King will officiate. Burial will follow at Sandy Cemetery in Sulphur. A Wake will be at the family home, 1217 Bolton Street, Ada from…