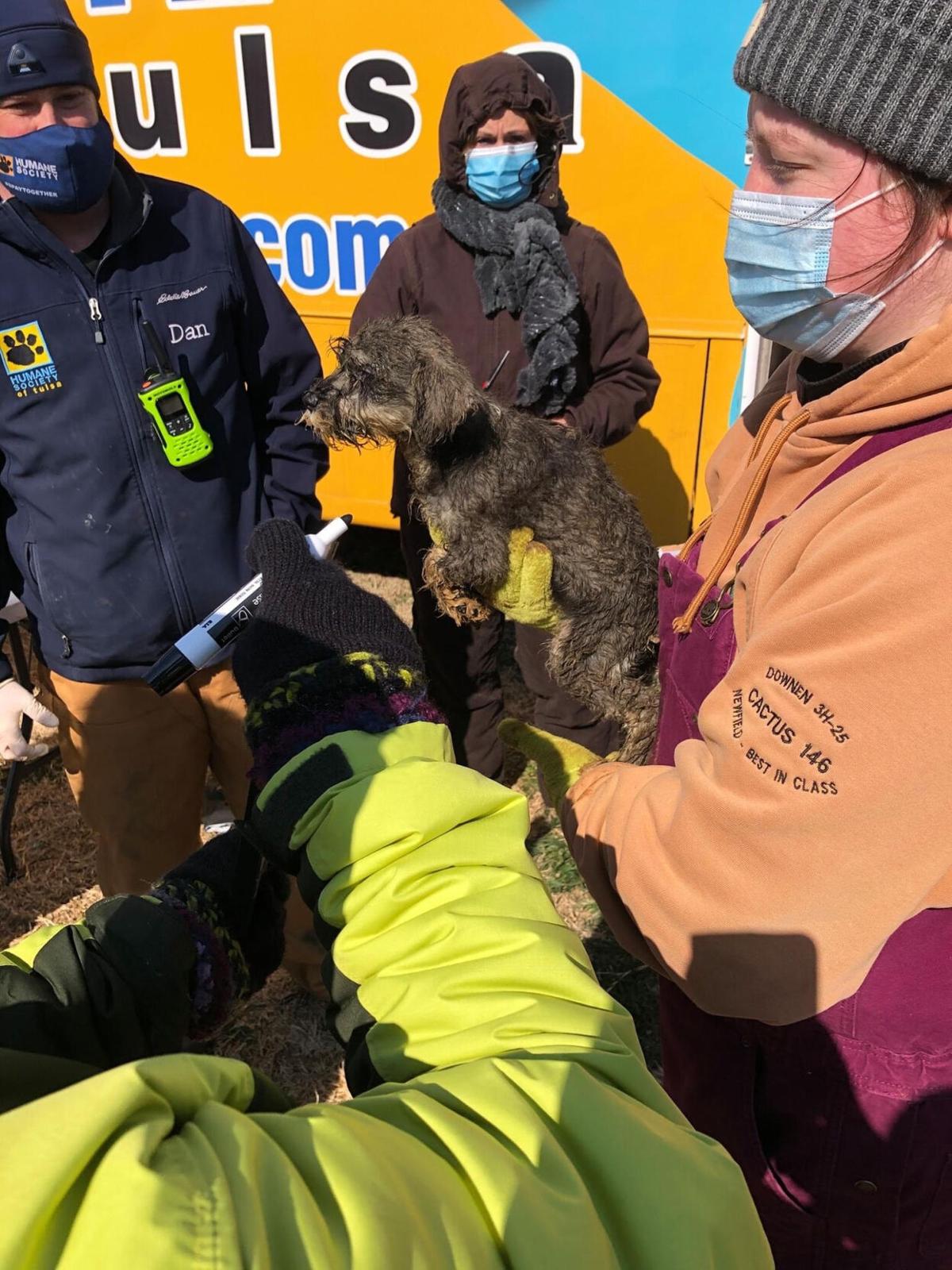 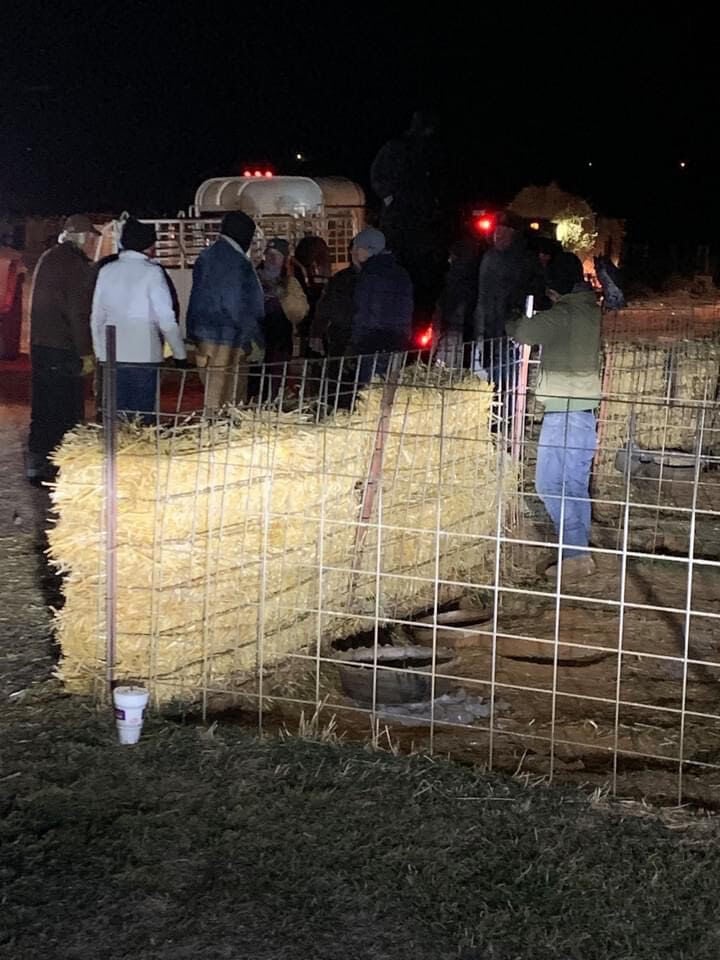 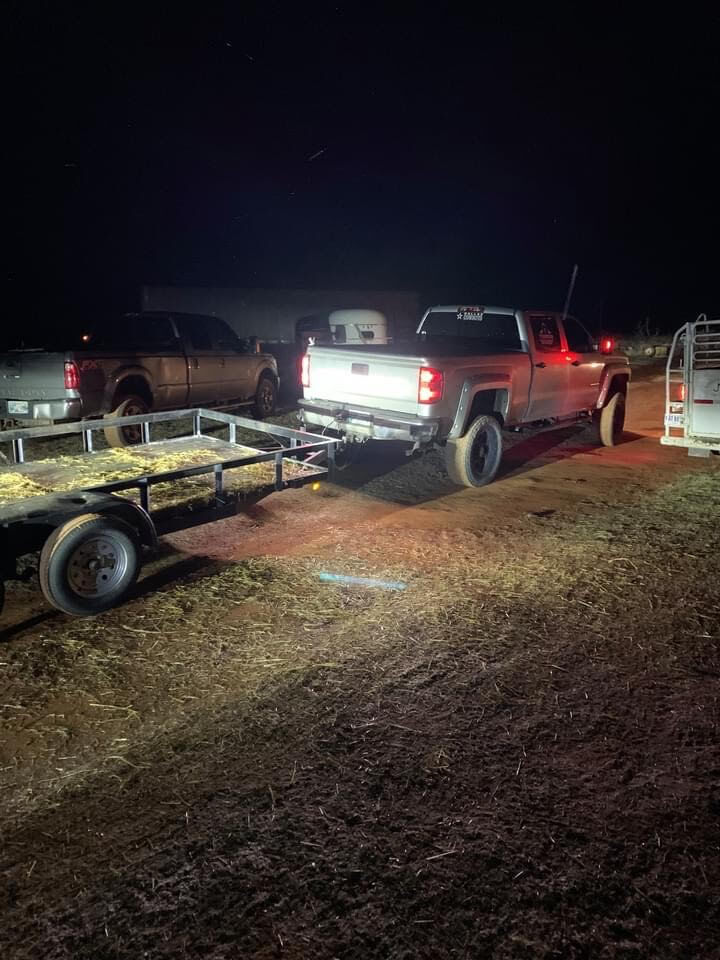 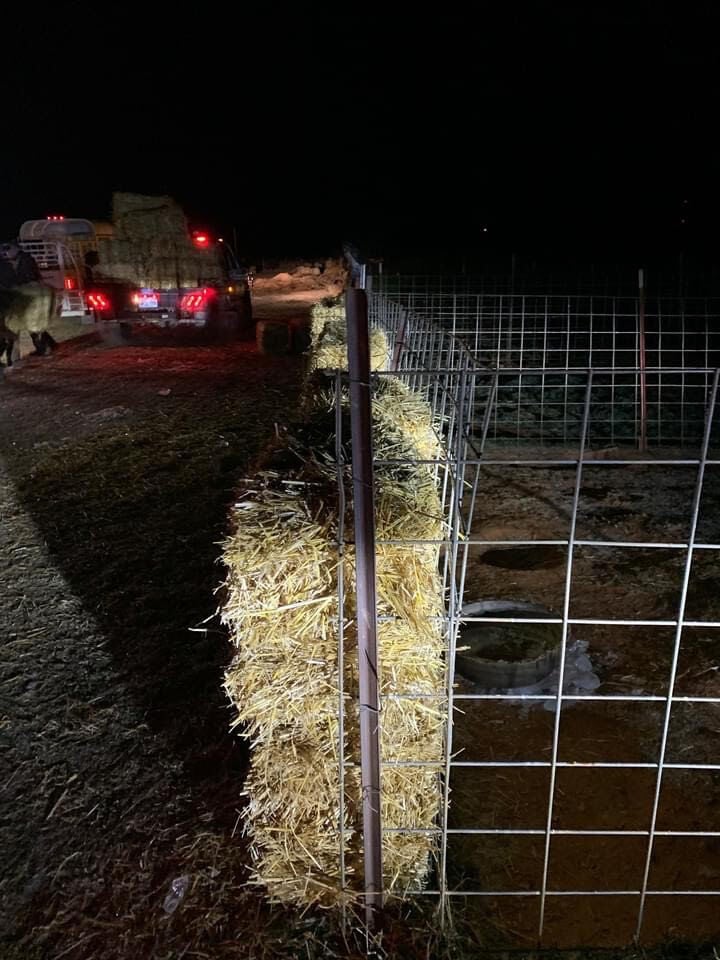 Community members showed up Friday night with hay to help over 150 dogs that were without shelter. Pictured are the wind breaks that volunteers formed to help alleviate cold winds. 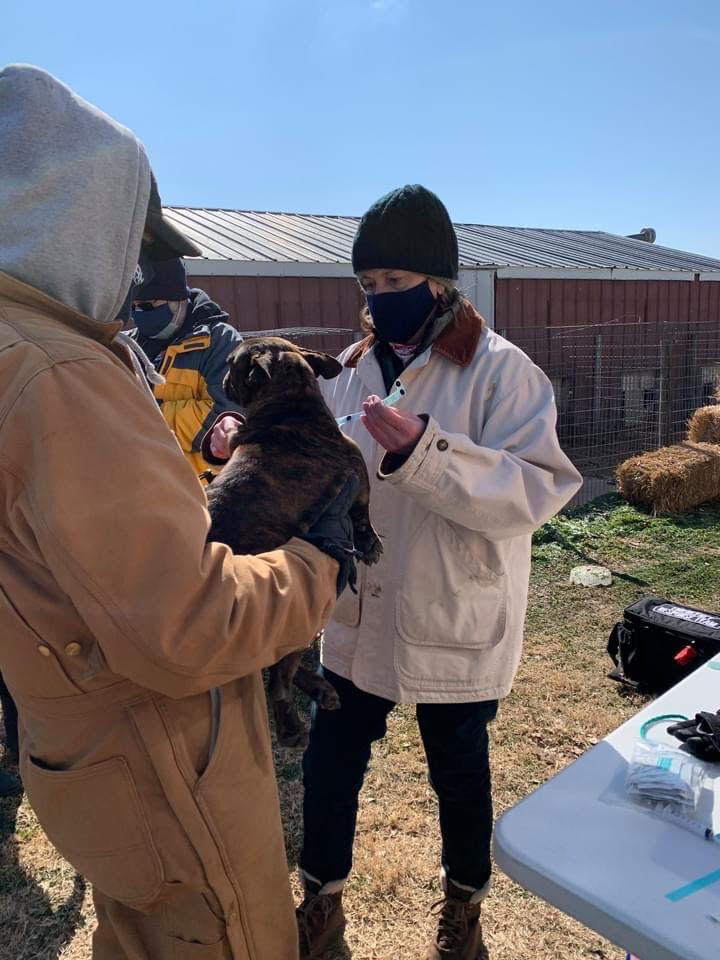 Volunteers help with the dogs found at a local puppy mill on Saturday. 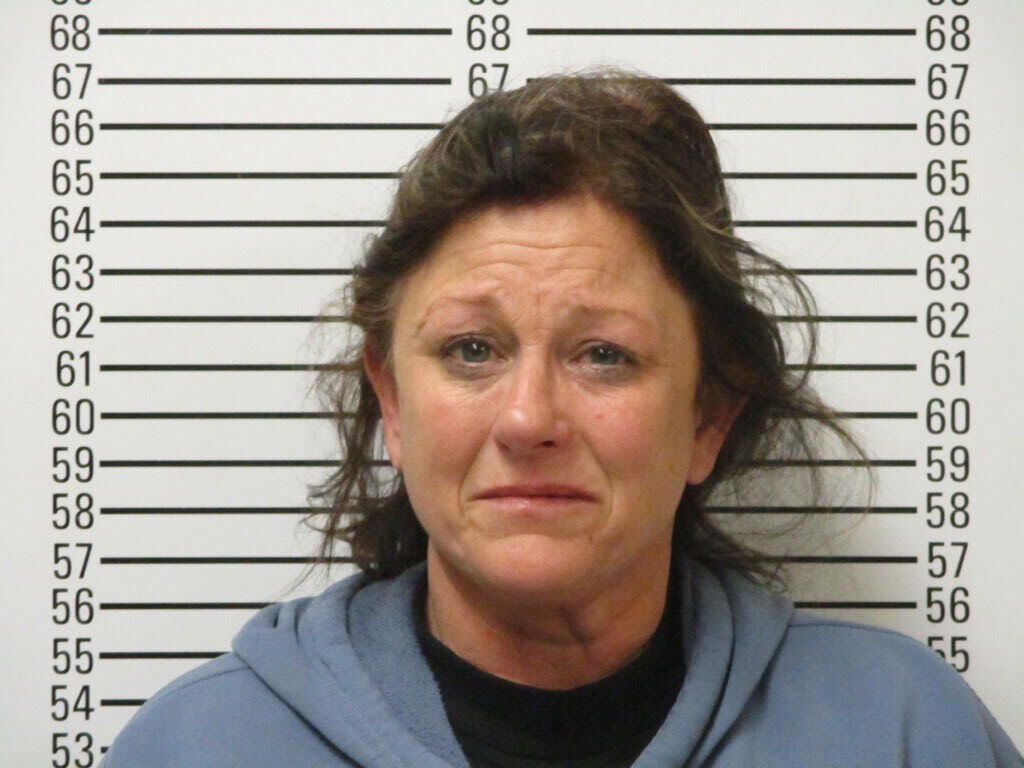 Community members showed up Friday night with hay to help over 150 dogs that were without shelter. Pictured are the wind breaks that volunteers formed to help alleviate cold winds.

Volunteers help with the dogs found at a local puppy mill on Saturday.

MARLOW — Stephens County Sheriff Wayne McKinney said one person is in the county jail facing accusations of second degree murder after a puppy mill investigation led to lawmen finding nearly 200 dogs and the body of a woman in an outhouse on the property.

McKinney said Karen Jean Pritchard, 49, faces charges of animal cruelty and second degree murder after deputies found the body of Ashley Nicole Anderson, 31. McKinney said they believe Anderson was an employee of Pritchard’s at the puppy mill, and that Pritchard was allegedly running that puppy mill from her property in the 2400 block of N. Highway 81 in Marlow.

According to McKinney, the investigation began after an individual entered the courthouse Friday morning and told law officers they overheard a conversation about a possible woman who had been run over in a driveway. The individual, McKinney said, told deputies they heard in the conversation indication that made them believe the female homeowner drug the victim in the home to keep her warm after the incident happened.

McKinney said when deputies went to the home and made contact with Pritchard, she denied knowing Anderson’s whereabouts. He said deputies also noticed the large amount of animals and felt animal cruelty might be involved, and moved to get a search warrant.

After obtaining a search warrant, deputies went back to the home to continue searching for Anderson and discovered how many animals there truly were on the property. On Friday, temperatures in Marlow came in around 16 or 17 degrees with snowfall. McKinney said that’s when he called the Stephens County Humane Society to tell them what they found.

Then, they found Anderson’s body, about six hours later.

“After approximately six hours of searching we finally located the victim,” McKinney said. “A person deceased in an outbuilding quite a ways away from the home where they had been dragged to.”

McKinney said SCSO took Pritchard in for investigative detention and after an interview, she was arrested and charged with second degree murder and animal cruelty.

The murder investigation is still fluid, according to McKinney, and the animal cruelty case is coming together through work from investigators as well as the district attorney’s office and emergency animal response teams from Washington, D.C. and Tulsa, Oklahoma.

Kelly Nelson, a board member from Stephens County Humane Society who has been involved for about 10 years, made it to the scene Friday and knew they would need help and had to do something quickly to protect the dogs from the bitter cold until the emergency response teams from Tulsa could make it to Marlow.

“I would have guessed a couple of hundred dogs,” Nelson said about her first impression when she arrived on scene and began assessing damage. “Our final count was 165.”

Nelson described the property as having barn-type or storage buildings on it with animals inside and then “a lot of animals outside.”

They moved the animals they could, Nelson said, but the ones left on the property needed serious help.

“The animals outside had no shelter, no water, no food and no bedding, even in their houses,” Nelson said.

Patti Whittaker, SCHS board member, said she received a call from Nelson around 9 p.m. saying they needed to put out an emergency call for hay and straw to help provide warmth for the animals. After a post to Facebook, Whittaker said within an hour the community had rallied together an overwhelming and touching response.

“It was unbelievable,” Whittaker said. “We went from tears of, ‘what are we going to do,’ just overwhelming tears, to tears of joy.”

Community members showed up with bales of hay and even though it was dark and freezing cold, volunteers took to work to help the humane society and the dogs.

“It exploded,” Nelson said. “People came immediately with bales of hay and rolls of hay and dog food, and they stayed and they helped to get all of this into the kennels and houses. Even the Marlow Fire Department came and watered all of the animals because everything was frozen. It was just amazing. In an hour and a half, we had every animal fed, watered and sheltered for the night.”

They lined hay on the kennels to make windbreaks for the animals and fortunately, the dogs survived the night. More Than Pets, the shelter and local vets helped house the animals they could and one dog even gave birth at a vet clinic during the night.

“They had straw in their shelters, on the ground and in front of their kennel so that it would break the wind and that was the only way that we were willing to leave them,” Nelson said.

On Saturday, those animals returned to the site and the humane society, an emergency response team from the Tulsa Humane Society and volunteers processed them, tagged them and photographed them before they loaded onto buses.

“Thank you for stepping up every time we ask, from donated supplies to money to food to hand warmers — we had someone who donated hand warmers to all of us, it was a life saver,” she said. “We had volunteers who came today (Saturday) and fed and watered the animals again and we brought the animals one at a time so the animals could be photographed and documented. People stood in line in 21 degree weather to help us get all these animals processed so they could be transported to safety.”

The dogs, Whittaker said, were so neglected they were matted and some were facing issues with their eyes and ears. Now, they’ll receive the treatment they need.

“We do all we can but there was no way we could accommodate all of these animals,” Whittaker said. “Out of something so tragic, so much good from the community came — it’s amazing.”

McKinney said while the department worked the two heartbreaking cases on Friday and Saturday, they also felt the outpouring of love from the community.

“It’s terrible that we had a murder and lost a life, a young lady, but it also makes the situation much, much worse too with the amount of animals that were being deprived like these were. They were extremely deplorable conditions,” McKinney said. “The outpouring of citizen support, bringing in hay last night … to get up in 17 degree weather with the wind blowing like it was, to bring straw hay out for bedding for the animals we could not get removed last night, to work into the night and to get back up this morning and help the humane society volunteers load up animals — it was quite the thing to see. I’m so proud to live in Stephens County because of the kind of folks we have. They have big hearts and they really turned out and they really showed it last night.”

Although Pritchard remains in jail, she won’t appear before a judge until at least Tuesday because of Presidents’ Day. The Banner will update when Pritchard’s bond amount becomes available.

For those who wish to help the Stephens County Humane Society, a local nonprofit, donations can be made online at http://www.stephenscountyshelter.com/.

A Marlow woman who was arrested on the weekend of Feb. 12 faces 113 charges related to the second degree murder of a woman and a puppy mill operation at the accused’s home.