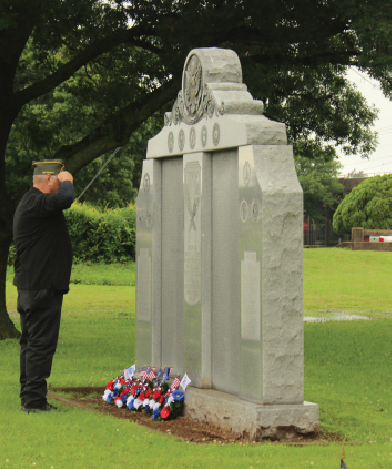 The ceremony recognized those lost in each of the five military branches, as well as the Merchant Marines and POW/MIA through the posting of military service flags and the laying of memorial wreaths. 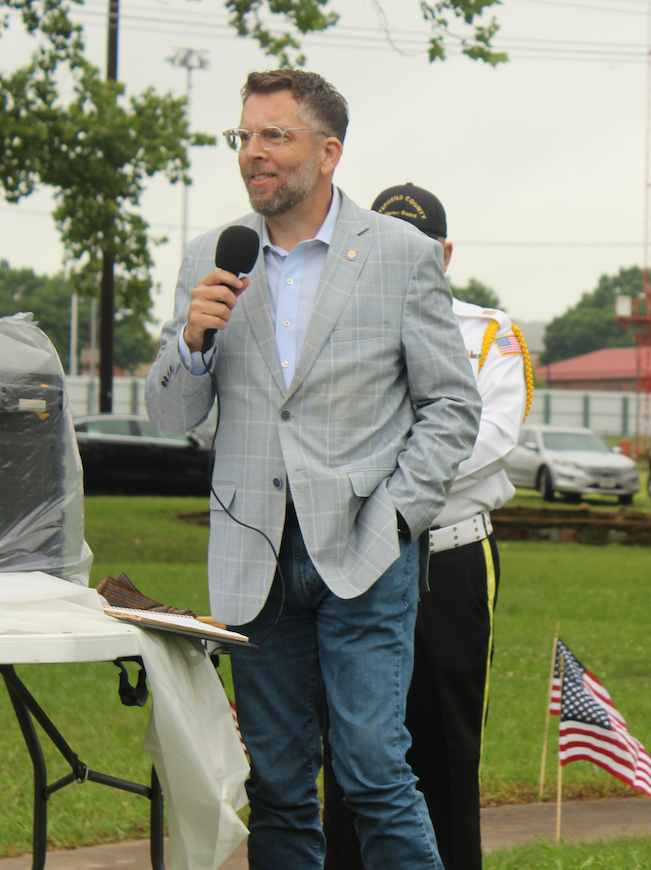 Rep. Marcus McEntire, R-Duncan, speaks before the crowd gathered at Memorial Park on Monday, May 31 during a Memorial Day Service.

The ceremony recognized those lost in each of the five military branches, as well as the Merchant Marines and POW/MIA through the posting of military service flags and the laying of memorial wreaths.

Rep. Marcus McEntire, R-Duncan, speaks before the crowd gathered at Memorial Park on Monday, May 31 during a Memorial Day Service.

A rainy Monday didn’t dampen plans military organizations and community members had to come together for a moment of remembrance through a Memorial Day Service for those who laid down the ultimate sacrifice in the name of freedom.

Military units, including Stephens County Honor Guard, AMVETS, VFW, the Disabled American Veterans (DAV) and the American Legion hosted the ceremony that took place at noon on Monday, May 31 at Memorial Park, located on the west side of Highway 81, north of the Earl P Halliburton Memorial in Duncan.

The ceremony recognized those lost in each of the five military branches, as well as the Merchant Marines and POW/MIA through the posting of military service flags, the laying of memorial wreaths, a rifle volley tribute to all past military members, the playing of TAPS, and remarks from Rep. Marcus McEntire, R-Duncan.

McEntire thanked everyone for attending the service and began to answer the question, “why are we here?”

“It’s a bit uncomfortable today I guess, a little bit chilly. Some people see us out here and they may think that what we’re doing out here is some type of sacrifice. We’re sacrificing a little bit of our day,” McEntire said. “When you put that into comparison with the sacrifice we’re talking about today, this is no sacrifice at all. This is something all should do every year.”

McEntire said since becoming a federal holiday in 1971, many have associated Memorial Day as “a celebration.”

“A beginning to summer. We have an extended weekend, a day for golfing, going to the lake, cookouts, just looking for any way to spend this extended weekend,” McEntire said. “It’s a day, for many, of partying. But today is not a celebration at all. It’s not a day for recognizing Veterans even. It’s a day to come together and solemnly contemplate the cost paid for our freedom and the lives of those who gave them and sacrificed them so willingly.”

McEntire said many Americans today are individualistic and focus on the lives of themselves more than those around them.

“We tend to focus on our own lives and our own families rather than thinking about the struggles and sacrifices and even sometimes the feelings of others,” McEntire said. “We get so distracted stopping to remember the big picture things like ‘why are we here,’ and ‘how in the heck did we get here’ — that really doesn’t happen very much. So we really need a day like today. A day to stop, reset, get outside our own little world, broader our world view a little bit, and remember those who fought and sacrificed their futures so we could enjoy our present.”

He said taking the day, or even just a moment, to remember these sacrifices is important.

McEntire said, “remembering is important because we’re defined by what happened back then.”

He said there’s another group who don’t have a choice but to think about Memorial Day, “because Memorial Day occurs every day of their lives.”

“The thought of a lost son or daughter, or mother or father, aunt or uncle, grandmother or grandfather — that thought of that loss is never far away no matter how busy we get, no matter how focused we are on our own worlds,” McEntire said. “When a person inside your world is gone, you just don’t forget. Sometimes it’s difficult for these folks to even smile, and for those of you who fall into this camp, our prayers are with you and we owe you our support, our condolences and our sympathy.”

McEntire told the group he said all of that to say that today “really isn’t a day for mourning either.”

“It’s not a day for celebration and it’s not a day for mourning,” McEntire said. “General Patton said it best, he said, ‘It’s foolish and wrong to mourn the men who died. Rather, we should thank God that such men lived.’ The challenge for us today is to not merely remember, not be sad, but to remember with gratitude and dare I say, we should remember with pride. We should remember with pride and thankfulness because our wars and conflicts of the past have given us the freedom and hope for our future.”

Following McEntire’s remarks, Past Commander of the Stephens County Honor Guard Dan Mitchell went over the importance of the Memorial holiday.

“This day is not Veterans Day. It’s not Armed Forces Day. It’s not Military Appreciation Day. This day is to honor and remember the men that lay in our cemeteries and whose names are on these walls,” Mitchell said. “They are there for their service and their sacrifice to all of us as Americans. Did they do these things in vain? Do we even care anymore? By your presence here today, you’re saying ‘yes’ to that last question. We care. Remember our loved ones. Remember those who have sacrificed for us. Sailors, soldiers, marines, airmen coastguardsmen, merchant marines, and even our new space force. They are military that would give the ultimate sacrifice for any of us and for all of us.”

“Memorial Day is a time to remember heroes and those angels that walk among us throughout our lives and even before we even existed,” Mitchell said. “May we always remember and honor the ones that really deserve our respect.”

The memorial wreath laying, TAPS and the rifle volley tribute to past military members, followed by prayer, closed the ceremony.

Mitchell felt the turnout, despite the weather, was very good.

“I’m pleased with what we have turned out,” he said. “It was all about remembrance because if we forget, we’re forgotten.”