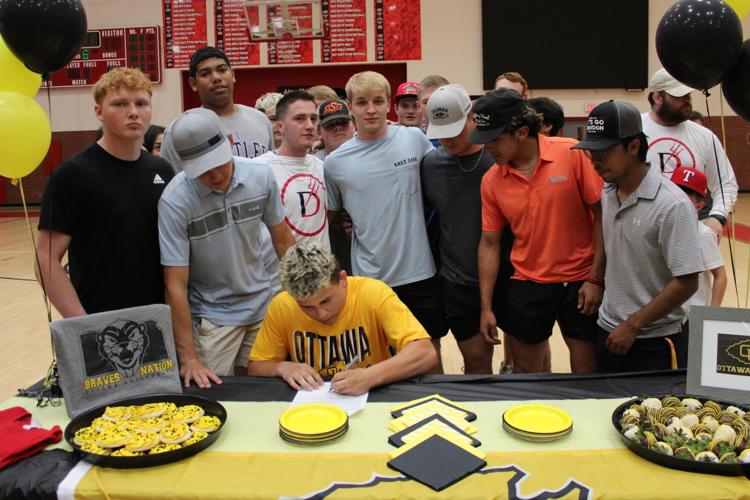 JP Martinez signs his letter of intent with all of his wrestling teammates in the background cheering him on as he puts pen to paper. Martinez will head to Ottawa University to wrestle for the Braves after a State Championship at Duncan. 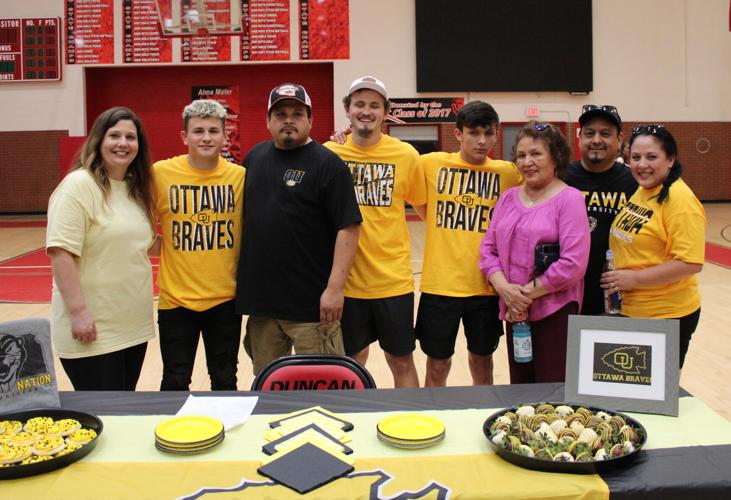 Standing with his immediate family, JP Martinez makes it official as he signs with Ottawa University out of Kansas.

JP Martinez signs his letter of intent with all of his wrestling teammates in the background cheering him on as he puts pen to paper. Martinez will head to Ottawa University to wrestle for the Braves after a State Championship at Duncan.

Standing with his immediate family, JP Martinez makes it official as he signs with Ottawa University out of Kansas.

Winning a State Championship in his senior season will always be a memory of his time at Duncan High School, however JP Martinez will now head to an up-and-coming wrestling program in Kansas to start his college wrestling career.

Martinez, the 5A-138 State Champion, signed his letter of intent for a scholarship with Ottawa University out of Kansas to wrestle for the Braves for the next four years.

After winning a State Championship his senior season, Martinez said his goal is to go to college and possibly contend for a National Title with Ottawa University.

“My whole life, you know growing up I always wanted to win State and it always has been a dream of and it finally came true,” Martinez said. “This is the sport that I love and so you know, I thought why not go and try to win a National Title in four years … So I guess I’m going to go out there and do that.”

Duncan Wrestling Coach Ashton Cooper, who was the head coach for Martinez’s senior year and assistant for his junior season, is proud of JP and hopes to see big things out of him.

“We are super proud of JP for deciding to continue his wrestling career. That makes two former Demons currently wrestling in college,” Cooper said. “Ottawa is a up-and-coming wrestling program in Kansas. They have great facilities and a lot of support. I’m excited to see what impact JP will have on their program.”

Going on a visit around seven to eight months ago is what drew Martinez to the university. He said the atmosphere is what cemented the deal.

“The coaches are nice and it was a pretty nice school and the teammates were nice and they had a good wrestling room,” Martinez said. “It just felt like the environment that I wanted to get into.”

Through his junior season, Martinez qualified for the State Tournament but couldn’t make it to the title match until his senior season. He let those three years fuel him into the wrestler he became.

“I knew that the first three years that I went into the State Tournament I was always losing in overtime each match and that just bothered me,” Martinez said. “I knew that I could be better than what I was. So the failure that I had those three years helped me my senior year.”

Martinez said he felt thankful for Coach Cooper and his family for being a big part of his life and he will cherish everything he learned from them to get him to being a college wrestler.

“In my opinion, I feel like it’s Coach Cooper and Coach Prutch because they are always going hard and drilling with me and he is always pushing me to be a better me,” Martinez said. “Also, Coach Cooper for always being there for the late night practices and the early morning practices while taking us to these practices that aren’t in Duncan, you know to get better and get better competition. My mom and dad for sure — everywhere I go they are always there supporting me. If I lose, if I win, you know, no matter the outcome, they are always going to be there to support me.”

ADA [ndash] Curtis Junior Baker, 89, passed away at his home in Ada, Oklahoma on June 25th, 2022. The funeral service will be held at 9:00 AM Wednesday, June 29, 2022 at Estes-Phillips Funeral Home in Ada, Oklahoma. Interment will be at Memorial Park Cemetery west of Ada. Visitation will be …