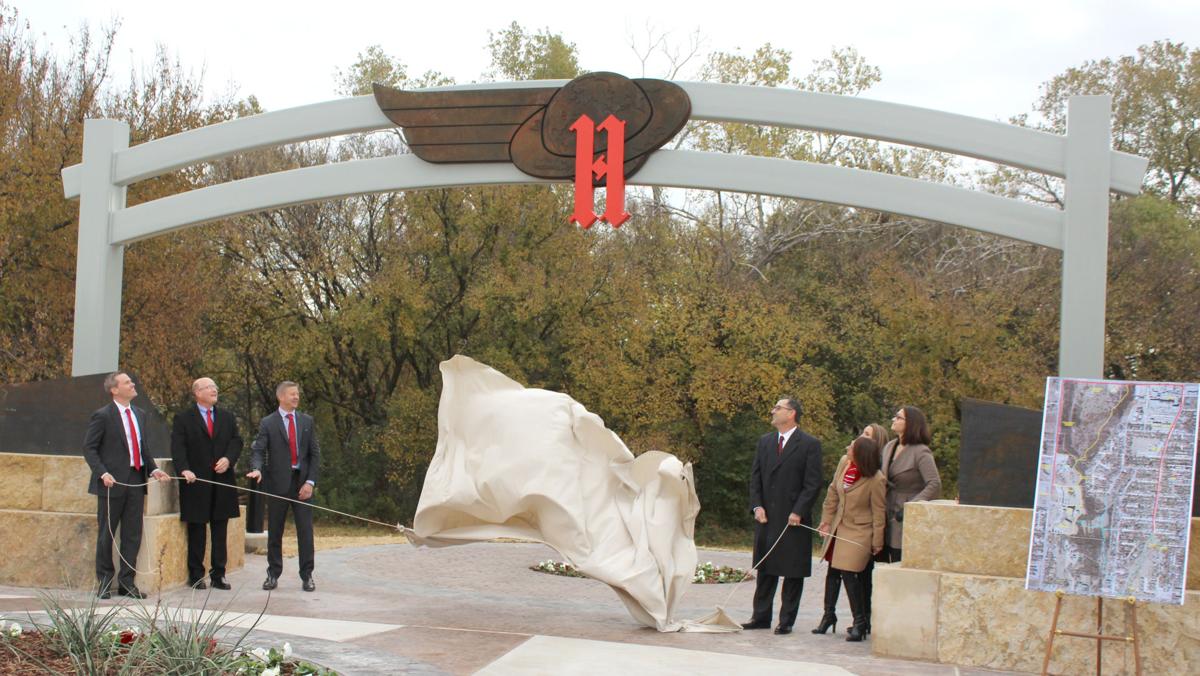 Halliburton Executives unveil the flying H at the Halliburton Plaza, located just north of the Simmons Center, during a ceremony kicking off the Heritage Trails construction. 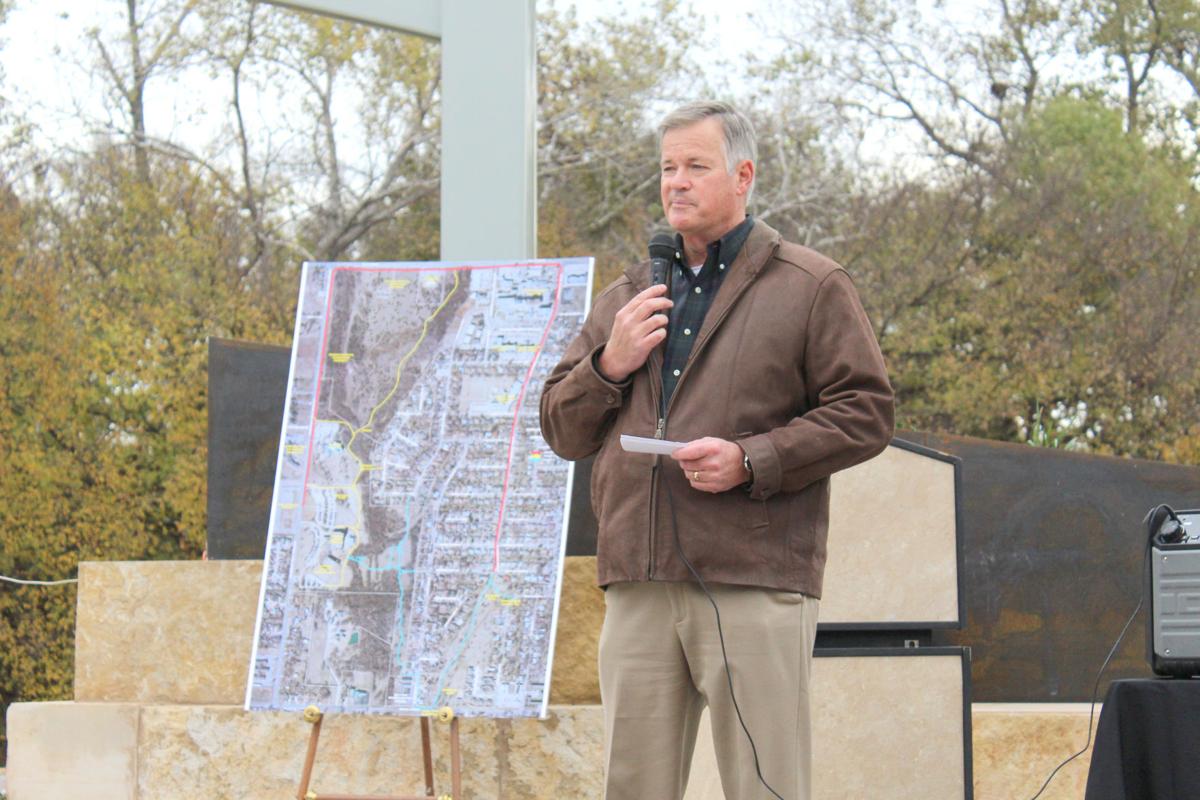 Scott Stone, chairman for the Heritage Trails Project, gives a welcome speech before the unveiling of the Halliburton Plaza and kick off to construction on the trails.

Halliburton Executives unveil the flying H at the Halliburton Plaza, located just north of the Simmons Center, during a ceremony kicking off the Heritage Trails construction.

Scott Stone, chairman for the Heritage Trails Project, gives a welcome speech before the unveiling of the Halliburton Plaza and kick off to construction on the trails.

An unveiling ceremony Friday morning signaled two things for a project which has been underway in Duncan since 2010: construction of the Heritage Trails is officially underway and the three-mile-long trail will be packed full of the city’s history.

The ceremony took place at 9:30 a.m. just north of the Simmons Center, behind Centennial Park, at what is now known as Halliburton Plaza. Duncan Chamber of Commerce, the Heritage Trails coalition and members from Halliburton gathered for the unveiling ceremony, which revealed the plaza and recognized the half-million dollar donation from the company’s charitable foundation.

Scott Stone, chairman of the Duncan Heritage Trails coalition, said the morning not only helped mark and celebrate Halliburton’s 100th anniversary in Duncan, but also showed an asset which will contribute to quality of life that is coming.

“Erle Halliburton started his company 100 years ago in 1919 and that is a super event. What Halliburton has meant to Duncan cannot be described in words,” Stone said. “This was the birth place, this is where they’ve been for 100 years. Duncan would not be what it is without Halliburton and we’re here to help celebrate that legacy of Erle Halliburton.”

Before the unveiling, Scott also provided a history on the project.

“Our coalition started meeting in 2010. I know that seems like a long time and it has been, it’s often been two steps forward and one step back,” he said. “If I had a dollar for every time someone came up and said, ‘Well when are we going to see the trails start being constructed,’ we’d have them constructed by now.”

Stone mentioned the community project was made possible by a variety of entities — including those on the coalition with representatives from City of Duncan, Simmons Center, Duncan Regional Hospital, the Duncan Chamber of Commerce, Chisholm Trail Heritage Center, Duncan Public Schools, Cameron University, Halliburton — and many other individuals “who are community minded who just wanted to see us increase the quality of life here in Duncan in a real positive way.”

“I know I look out here and I see a lot of supporters and donors and people who have been involved in the trails,” Stone said. “I want to especially thank Jeff Miller, Halliburton President, CEO and chairman of the board, Susanna Sabbagh, vice president and president of the Halliburton Charitable Foundation, and of course Mike Gray, director of manufacturing here in Duncan and their entire team for being here today.”

Stone said there were two main goals for the trails.

“If you need some area to do a pull up or a push up, this is may not be the area. We’re not going to have those things, but the two emphasis is we want these trails to be beautiful. We want to attract people to come here in a nature setting that is not just going to be a ribbon of asphalt and I think with Halliburton Plaza, you can see we’ve got a really, really good start,” he said. “The second thing we wanted to do — and this is really critical to Halliburton and everything else — is to tell the history of the community, tell the history of this area. Stephens County has a rich heritage, we’ve adopted five C’s that we want to tell the story of. Those five c’s are Crude, Cotton, Cattle, Chickasaws and Crapemyrtles and those will be with plaques that tells the stories. We have a historian that’s writing certain things … It’ll be a beautiful experience, an educational experience and one that will make these trails extremely unique.”

Stone said Randy Wilson and his WW Builders team began construction on the plaza about eight weeks ago when it was still simply just a field. Through the unveiling, visitors were still standing in a construction site, technically speaking. Soon, the construction company will order an 125-foot bridge to cross the creek behind the Heritage Center, Stone said.

“This is just the beginning,” Stone said. “We’ve got about a quarter of a mile. When we’re finished, it’s going to be over three miles … The nature trail that will extend from the Simmons Center is designed to connect a lot of the neat things in this town, the things we’re very proud of with the Simmons Center, the Heritage Center, the hospital, the schools and other parks. It’s going to be first class. That is a 10 foot concrete trail there. That’s very unusual, this is going to be a multi-purpose system. Anyone on a bike, walking, running, handicap accessible, it’s going to be able to be used by entire families. This is going to be a gathering area. We’re going to have other mini plazas that will tell other stories about Duncan.”

He said the construction takes place in three phases, which includes the nature trails, another phase which Oklahoma Department of Transportation (ODOT) will help fund by about 70 percent and then the final  phase.

He said like Halliburton’s plaza, other plazas will begin to appear, including one for DRH on Elk and a Heritage Plaza behind the Simmons Center.

“We’ve been working on this for nine years,” Stone said. “There has been a couple of moments when I finally thought, ‘this is really going to happen.’ I’m an attorney, I don’t know things about building a trail, and the people on our coalition, we look and go, ‘how do we go about doing a four million dollar project.’ Yeah, we had to raise money, but then how do we go about designing it. Luckily, we retained the services of AVG architects out of Oklahoma City but a lot of the ideas we had came from our coalition on things we wanted in the community and it’s still a work in progress. Ideas are always springing forward about what we want on the trails.”

He said those moments included ODOT approving the grant for Phase One and then the donation from the Halliburton Charitable Foundation.

“The second really main moment when I really knew the nature trail was going to be built was when … some of us were standing over there under those trees in August of 2018 and they told us the Halliburton Charitable Foundation wanted to make a gift of half a million dollars toward the trail,” Stone said. “That’s when I knew, ‘you know what, this is really going to happen.’ And it is happening. So I want to thank Halliburton, I want to thank everyone associated with Halliburton and the gift to our community. We’re going to take care of it, we’re continuing to raise funds to construct phase three and also a maintenance fund. It’s very important, Jeff, that when you come back out here in five years that there won’t be a crack in that brick because we’ll have the money to fix it. We’re going to take care of it, that’s our commitment and we’re just really excited.”

Then, the unveiling happened. Jeff Miller, President and CEO, and other Halliburton executives pulled down the tarp, uncovering the red H that designated it was Halliburton Plaza.

Miller then said a few works.

“It really is a pleasure to be apart of this today and to make a contribution to the Heritage Trails,” Miller said. “I started coming to Duncan in 1989 working with Halliburton and I spent four months a year in Duncan. One of my favorite things to do was to go out and run and in those days, running was from the Holiday Inn to the high school and then eventually to the Simmons Center and the idea that all of this is getting done here is fantastic in my view. I applaud the coalition for what has been done and what will be done. (We extend) our gratitude to Duncan obviously for Erle P. Halliburton, and the beginnings and the current state of activity in Duncan are all certainly important. The idea that we get a chance to be a part of remembering Halliburton’s founding in Duncan and something that will be living forever in the form of nature trails is really exciting for us. With that, (we) certainly congratulate the organization, wish you absolutely all the best, (and I) look forward to coming back and running on these trails when it’s complete. Maybe we’ll have a 5K or something.”

Before wrapping up the event, Stone said a formal dedication would come, hopefully toward the end of next summer when both Phase One and Phase Two are completed. Still, he said the organization would be seeking donors.

This story will appear in print in the Tuesday, Nov. 12 publication of The Duncan Banner.