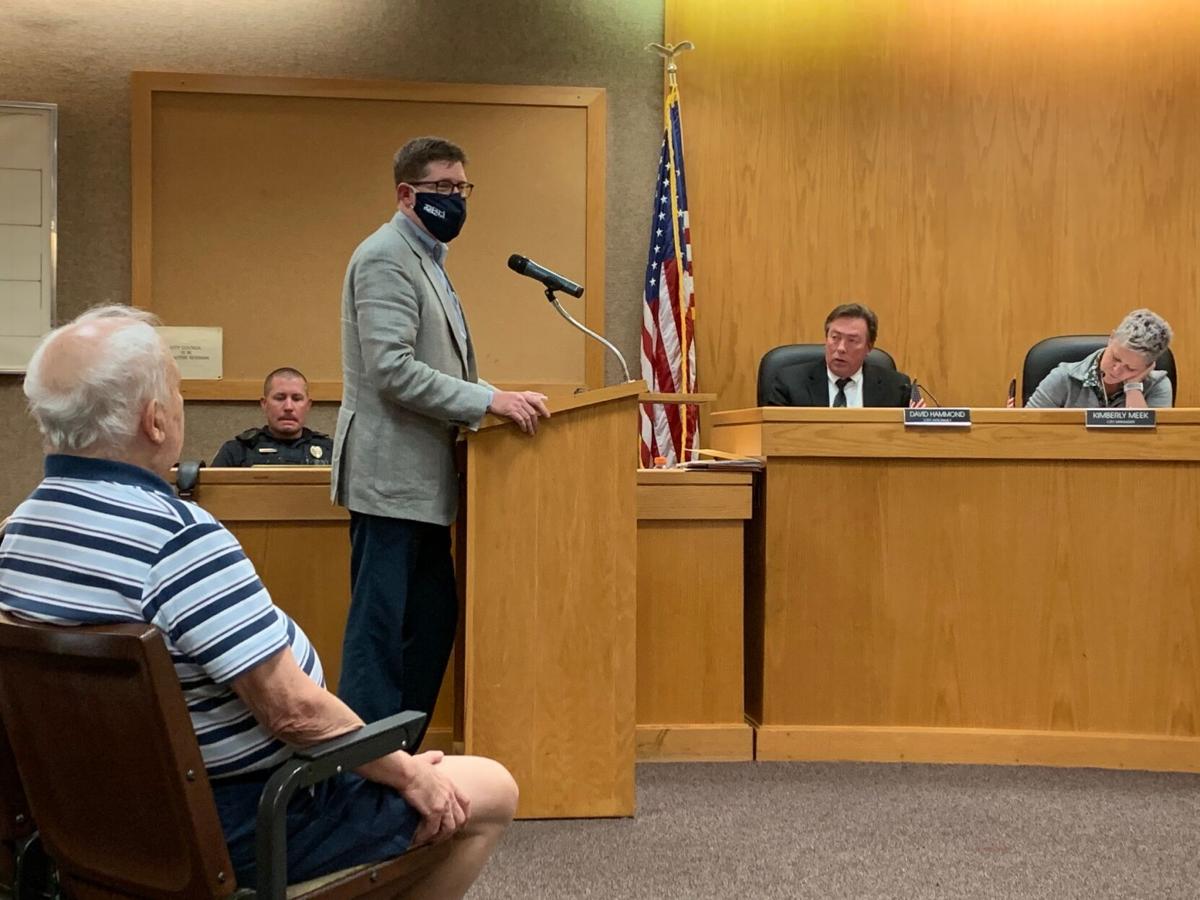 Hospital CEO Jay Johnson addresses Duncan City Council members on Tuesday, July 28 about the benefit of mask wearing throughout the duration of the COVID-19 pandemic. 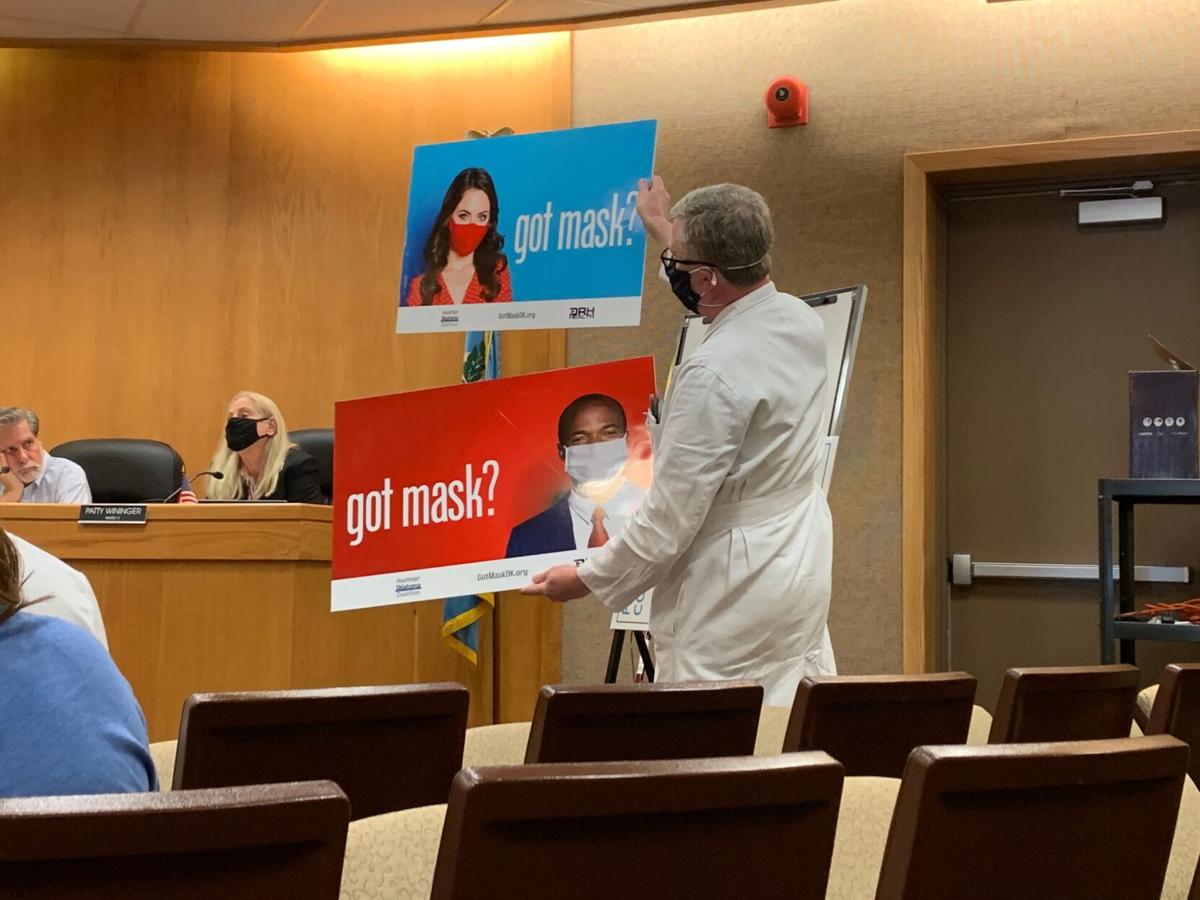 Duncan Regional Hospital’s Dr. Jim McGouran shows off future billboards the hospital plans to put up regarding mask wearing throughout the duration of COVID-19

Hospital CEO Jay Johnson addresses Duncan City Council members on Tuesday, July 28 about the benefit of mask wearing throughout the duration of the COVID-19 pandemic.

Duncan Regional Hospital’s Dr. Jim McGouran shows off future billboards the hospital plans to put up regarding mask wearing throughout the duration of COVID-19

Duncan Regional Hospital’s president, flanked by two doctors, approached Duncan City Council Tuesday evening to discuss the importance of mask usage in the community and the risk reduction it provides in the wake of COVID-19.

Jay Johnson, president and CEO of DRH, appeared with Dr. Jim McGouran and Dr. Michael Hemphill to discuss the COVID-19 situation with the council, announce promotion of mask wearing through billboards and ask City of Duncan to help lead the charge to promote mask usage among residents.

“From the healthcare perspective, I can tell you we think it’s really important,” Johnson said, noting the unique qualities COVID-19 has. “One of the few tools we have to protect ourself is masks. The interesting thing is when I wear a mask, I protect you and when you wear a mask, you protect me. So it really creates something I think Duncan does really well, and that’s a sense of community because it’s really about … helping each other.”

Johnson said he felt encouraged in the last week because while he was out in the community with his wife Saturday, he saw more people wearing masks than he had since the pandemic began. He felt there was a “pretty good representation” of people inside council chambers with masks on, too.

“I think it’s easy for me to say that though, too. We’ve been doing it for a while at the hospital. If you come in our doors, you’re going to be asked to wear a mask,” Johnson said. “Or really, we can’t let you in the building without it. If there’s any place where it’s super important (to wear masks), as you can imagine, it would be in the hospital. I can tell you, it wasn’t always easy and I think it takes time for people to get used to looking at each other with these things on their faces.”

Johnson said once masks become part of the culture, it won’t look as strange.

From there, he segued into announcing billboard placement encouraging mask usage and further promotion.

“There’s two of them, you’ll see these in town,” Johnson said as Dr. McGouran held the signs up, each depicting a person wearing a mask with the slogan “got mask?” next to the picture.

Johnson said a statewide coalition known as Healthier Oklahoma Coalition, which is comprised of healthcare groups from around the state, unified around the message of better mask usage amongst Oklahomans, especially “if we really want to have open economies and to beat back the pandemic as much as possible and live our lives as normal as possible.”

Before closing, Johnson told the council he felt leadership demonstrating mask wearing could help in Duncan.

“If there’s anything that I’d ask from the council tonight, is for you really to consider whether or not you would recommend and help us lead this because it’s really going to take leaders wearing masks, being around and showing up to encourage others to do that,” Johnson said. “Of course, if we wanted to go down the ordinance route, we absolutely would support that but I think the important thing tonight is really to get the community started talking about the pluses and minuses.”

Johnson introduced Dr. McGouran to speak before the council next about how they’ve navigated the pandemic. Right now, there are three positive COVID-19 patients within the walls of Duncan Regional, and the most Duncan Regional has had at one time is five cases.

McGouran said he began following this around Christmas time while it was in Wuhan. As Duncan’s pandemic leader, McGouran said one of the difficult parts of COVID-19 has been the “learning as you go” aspect the virus has compared to the routine confidence doctors utilize when managing health.

The difference between COVID-19 and other illnesses, according to McGouran, is that most illnesses have years of data and results that “stand the test of time.”

“Everything in medicine has been put on fast tracks,” McGouran said. “It’s been challenging to the medical community to keep up and catch up and try to offer what we think is the best to do. Masking is something we see with a very low downside other than personal comfort and a tremendous upside and so we’re very pro-mask.”

The problem is, according to McGouran, you just don’t know when you’re going to encounter the virus. And then, you don’t know who is necessarily going to get sick.

“The virus is sneaky the first few days, you might not have it, 30-40% never have a lot of symptoms but you can still be exposed,” McGouran said, “so we feel like it’s a good thing to do.”

COVID-19 appeared in Duncan in March, according to McGouran, and a resurgence appeared in the community again after Fourth of July.

“This isn’t just a few days after while you’re in the hospital, this is weeks after,” McGouran said. “We’ve got people so short of breath they can’t do their job … so the morbidity I think is going to be more important in the long run because we’re seeing it linger and we don’t know what to do about it.”

Before wrapping up, McGouran said not getting the virus is the best bet when it comes to defeating it and wearing the mask is one way to prevent spreading.

“Try to prevent the infection for your friends, for your loved ones, for your pastor, for your nurses and EMTs who work in the hospital, for the guys in the police department,” McGouran said. “Wear masks when you think about it, when you’re in an enclosed area.”

“I have a first responder patient in his 30s, a very healthy gentleman, that is almost four months out now from his illness and can’t return to work, can’t speak in full sentences because he’s so short of breath,” Hemphill said.

Then, he went into the evidence for wearing a mask.

“I know this has been controversial … but I’ll tell you what I’ve been able to ascertain … basically the best evidence we have comes from medical journals that are large studies, they look at many large studies and a lot of people,” Hemphill said. “The more people you have, the more confidence in the results that you see. So as far as the question of whether or not masks reduce transmission of disease, the data definitely supports this to be true.”

Hemphill said the most rounded study on mask usage shows it helps prevent transmission by almost 85%.

“The evidence is clear to me that we can reduce transmission with wearing a mask,” Hemphill said. “There’s some evidence now that we’re seeing that you can actually protect yourself (by wearing a mask) to some degree.”

Hemphill closed out by saying there’s no evidence of any ill effect from wearing masks, especially the cloth masks that community members are asked to wear.

Following the presentation, Ward 3 Councilwoman Patty Wininger took to the microphone to express her solidarity with mask usage.

“I would like to state for edification and awareness that there are specific municipal governance responsibilities; and that the number one priority is to promote the general welfare and health of the community,” Wininger, a retired nurse, said. “That is typically done by ensuring the municipality has clean water, the toilets flush with a working sewer system, sanitation is in place, there is electricity, adequate lighting and air, to provide police and fire protection, handle traffic and streets, and finally promotion of quality of life. To that end, I take very seriously my role as a Councilor as do all of us seated here. I want everyone in our community and county to be safe not only because of the council’s action, but because of the citizens’ actions as well. Such things as seat belt wearing, not smoking in parks, use of a helmet and crossing intersections at designated locations are all part of citizen actions to stay safe and healthier. Many of us choose and do these actions daily.

“The recommended steps of increased hand washing, use of hand sanitizer, social distancing and the wearing of a mask when inside places that are not our own home, is not a violation of someone’s rights, justice or freedoms,” Wininger continued. “It is about the promotion of the general welfare and health of the citizens. Wearing a mask helps us protect those we love, like, don’t know and ourselves. America is altruistic. Let’s prove it by wearing a mask as much as possible. Lives depend upon it.”

New councilwoman Jennifer Smith also delivered a comment much like Wininger’s in regards to supporting the wearing of masks.

“Now more than ever we need to stand together, six feet a part, and do what we can to help prevent this reckless virus,” Smith said.

“It’s a very hot topic as everyone knows and I just want to encourage people to be kind to one another,” Hayes said. “Honestly, we’re at a place where there’s a lot of fear, there’s a lot of fear being spoken and felt but we are a nation based on individual rights, not the rights of the society as a whole, otherwise we would be a socialistic state and so we do have individual rights and right now, we have the right to choose what’s put in my body and on my body. If someone chooses to wear a mask, I have a ridiculous amount of respect for you, I do.”

Hayes said she’s dealt with phone calls from constituents about how they’re being screamed at for wearing a mask or for not wearing a mask and with the pressure from everything combined, she wants both sides to stop being “mean” and start showing respect and “be kind.”

In other news, Duncan City Council heard a brief update on Phase One of the Heritage Trails Project from Scott Stone and approved an amended resolution on the project with Oklahoma Department of Transportation, authorizing City Manager Kim Meek to pay ODOT. More on this topic will appear in the weekend edition of The Duncan Banner.

FRANCIS [ndash] Graveside services for Alice Irene Henderson, 70, of Francis, are at 3 p.m. Friday at Cedar Grove Cemetery near Francis. The family will receive friends from 5 to 7 p.m. Thursday at Criswell Funeral Home.

TOMBALL [ndash] Graveside services for Josephine Leonard, 82, of Tomball, Texas, formerly of Ada, are at 10 a.m. Friday at High Hill Cemetery near Ada. The family will receive friends from 5 to 7 p.m. Thursday at Criswell Funeral Home. Due to family health issues, it is requested that masks …