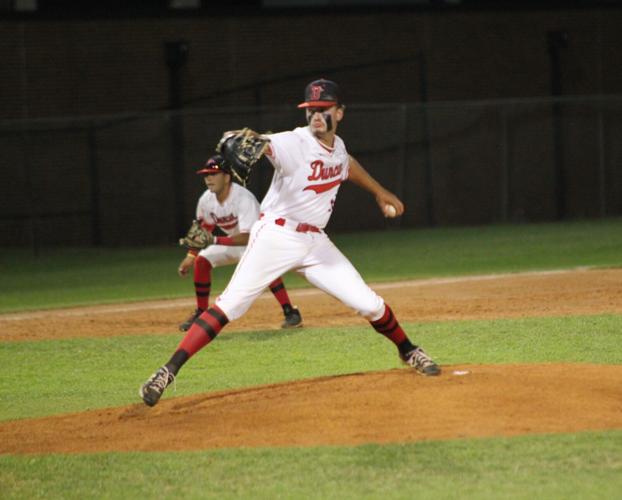 Brance Garrett pitches in the first game of the 5A State Tournament. He had a gem by throwing 12 strikeouts and only allowing two hits in the game. 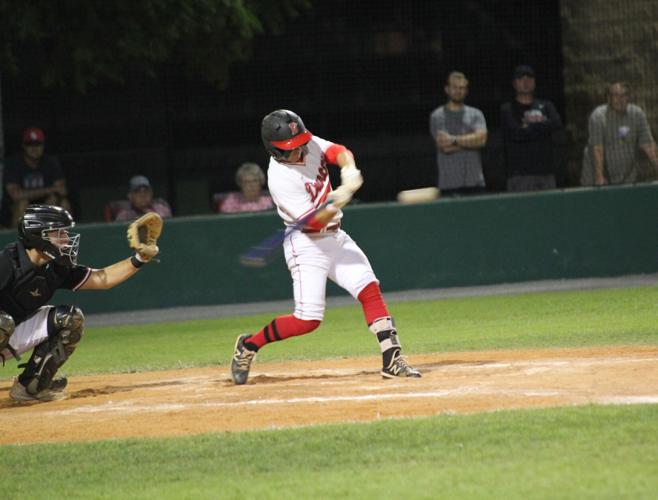 Bryson Brooksher hits the ball during the first game of the State Tournament for the Duncan Demons. Brooksher had a big second game going 2-for-3 driving in three runs in the 17-6 victory over Collinsville.

Brance Garrett pitches in the first game of the 5A State Tournament. He had a gem by throwing 12 strikeouts and only allowing two hits in the game.

Bryson Brooksher hits the ball during the first game of the State Tournament for the Duncan Demons. Brooksher had a big second game going 2-for-3 driving in three runs in the 17-6 victory over Collinsville.

The Duncan Demons punched their ticket to the 5A State Championship game after two victories on the same day.

With a delay in the first round, the game ended at midnight after the Demons saw a great pitching effort from Brance Garrett to win 2-0 over Bishop Kelley.

A few hours later, the Demons beat Collinsville in big fashion by 17-6 to head to Oklahoma City for the State Title game for the first time since 1988.

Duncan, trying to do something no other team has done since 1988, went in on a mission to win the State Tournament opener and they did so thanks to a gem on the mound from the junior ace of the staff.

Both pitchers dealt the entire game, however the Demons took advantage of a few mistakes to give them the 2-0 victory over the Bishop Kelley Comets.

As the home team, Garrett, on the mound, allowed one walk and struck out three batters to start the inning with the first run coming in during the bottom half of the first.

Peyton Roberson reached on a walk with one out, which brought up Chago Barham to try and put the first run across for either team.

Barham came up in the clutch to put a hit into the right centerfield gap to score Roberson and take the 1-0 lead over the Comets.

Garrett continued putting the Comet batters on chairs in the dugouts. He struck out another three batters to make it six straight outs with strikeouts.

Starting the top of the third with the same 1-0 lead, Garrett got a ground out to end the streak at six for strikeouts and continued his dominance by going 1-2-3 to keep the lead at one.

Duncan took advantage of some Bishop Kelley miscues as they added their final run of the game on an error to take the 2-0 lead throughout the rest of the game.

The junior ace ended with 12 strikeouts and only gave up two hits.

“There was a lot of pressure with the crowd we have and I usually don’t pitch with so much pressure — I had to make due and give it all I’ve got,” Garrett said. “Throwing the first day, I got it out of the way — that is my job and that is what I was supposed to do and I’m happy with it.”

With the victory, the Demons went into the semi-finals looking to put themselves against Collinsville to try and punch the ticket to the State Title match.

After a long evening, the Demons wanted to make sure to get the deed done. They did so via a mercy rule as they won 17-6 in the bottom of the fifth inning.

Tully Booth, Trevyn Stewart and Bryson Brooksher had the big bats as they drove in 10 runs in two big innings in the top of the third and fourth.

Brooksher left no doubt during the game by hitting a home run to left field to drive in two to give Duncan the 4-0 lead before the offensive jets were turned on in the top of the third inning.

Duncan sent 13 batters to the plate and scored seven as the Demons pushed their lead to 11-1 with Jackson Poage, Brooksher, Roberson and Stewart all driving in runs to start the inning.

A few batters walked with the bases loaded to add on the inning and give them the 10-run lead heading to the bottom of the third.

Collinsville added four in the bottom of the third inning with one big hit as a home run to left center put the lead to 11-5 in favor of the Demons.

Eli Ramirez hit a solo home run and Booth drove in two with a double in the top half of the fourth inning to put the lead at 17-5.

Kenny Garland, who went four innings on the mound, gave way to Ramirez, who finished the game off in big fashion to secure the State Title chance for the Demons.

Brooksher, after the game, was all smiles as his team got the victory.

“It feels good — this has been the goal for almost a year now and this team has faced the most adversity than anybody in the state,” Brooksher said. “We are staying together and it has been a good ride. We are not done yet.”

Duncan will play Piedmont at 3 p.m. May 14 at Chickasaw Bricktown Ballpark in Oklahoma City where the Demons will look for their first State Championship in the sport.

POLL: How do you feel about commissioners considering a use tax for online and out-of-state goods?

The Stephens County Commissioners are considering implementing a use tax for online and out-of-state goods. How do you feel about this?