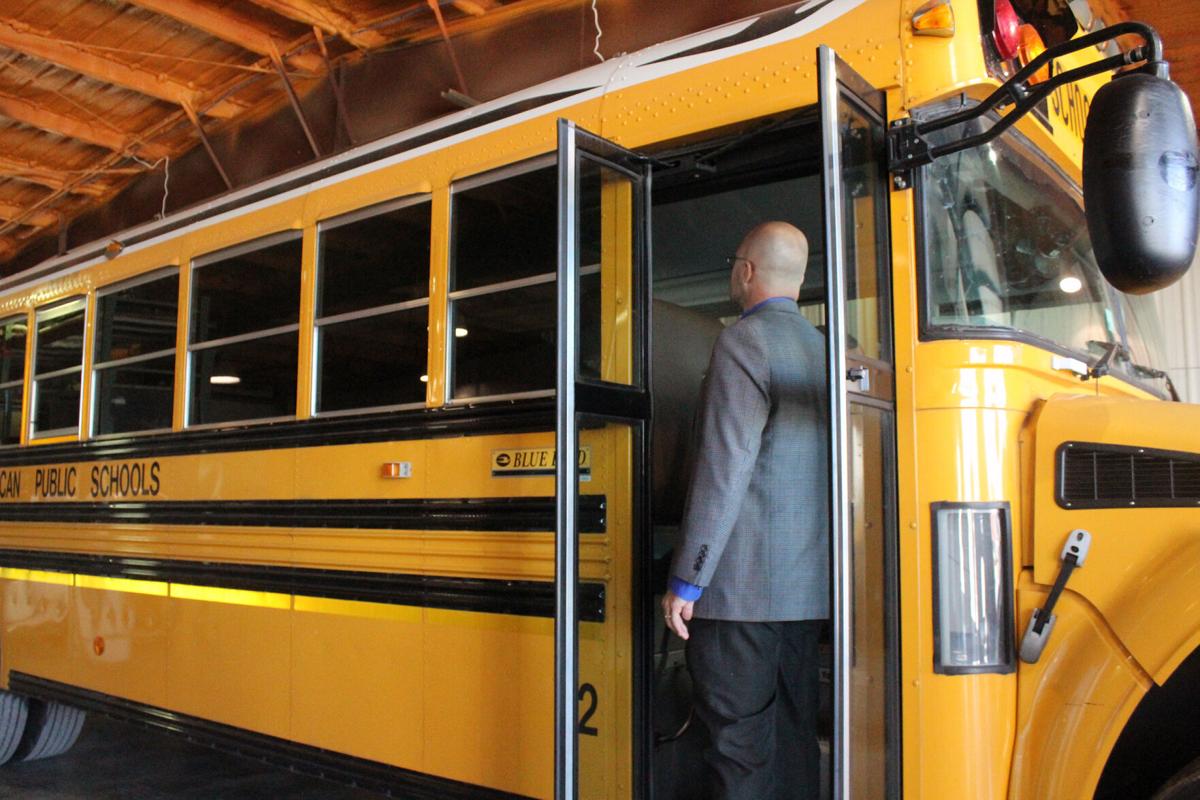 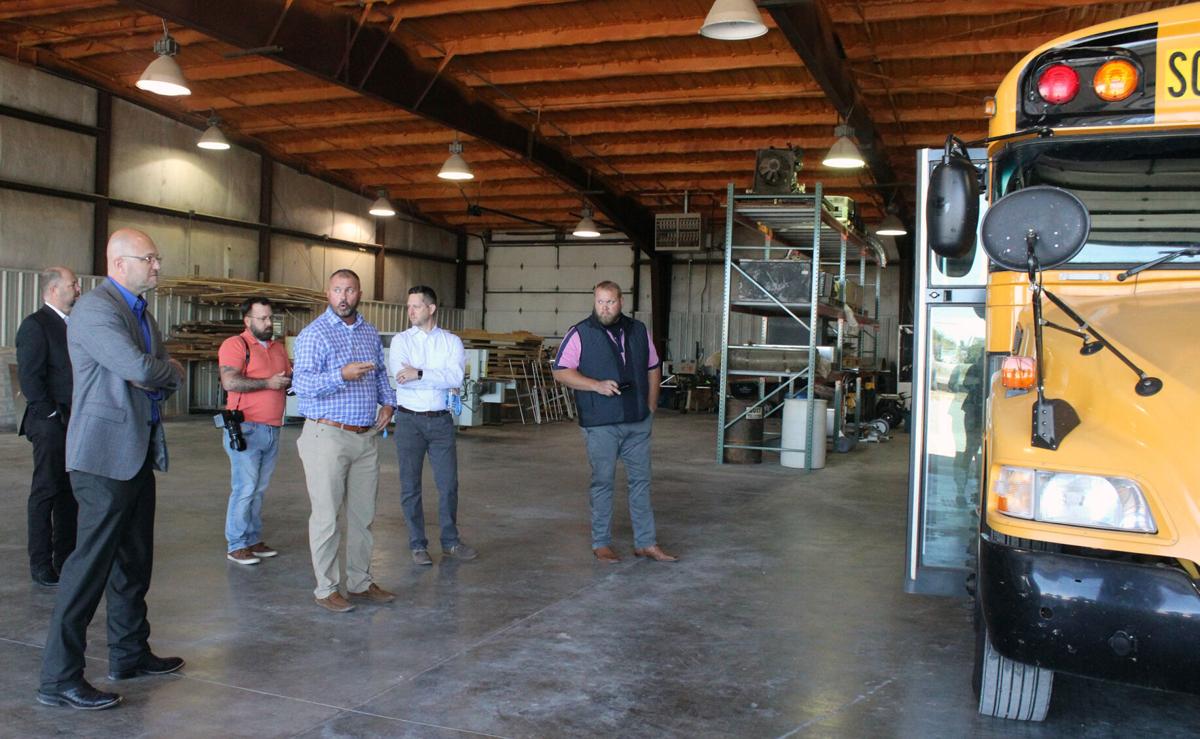 Oklahoma officials visited Stephens County Tuesday as part of the OKCARESTour, which checked in on local businesses that received funding from the state during the COVID-19 pandemic. Those on the tour stopped by BlackFoot Services, where they watched a demonstration of a bus being disinfected.

Oklahoma officials visited Stephens County Tuesday as part of the OKCARESTour, which checked in on local businesses that received funding from the state during the COVID-19 pandemic. Those on the tour stopped by BlackFoot Services, where they watched a demonstration of a bus being disinfected.

Two different entities within Stephens County will cash in after an announcement Monday, Oct. 5 that funds would be distributed to “assist in rural business development and job creation in rural Oklahoma.”

The announcement came from the Trump Administration, which said United States Department of Agriculture (USDA) would invest $904,889 in grant funds between eight entities and 10 projects, which include two projects from the City of Comanche and one project from Duncan Area Economic Development Foundation (DAEDF).

In Duncan, funding will go to Duncan Area Economic Development Foundation (DAEDF), which will then use the funds to acquire equipment to lease out to a business.

The funding DAEDF received, which totals $99,425, was originally intended to go to Kochendorfer Brewing Company so they could produce hand sanitizer throughout the pandemic when the sanitizer shortage originally hit, but DAEDF President and CEO Lyle Roggow said the timeline bumped back and changed some plans.

By the time funding was granted, Kochendorfer had already began its journey with canning and delivery, Roggow said, so the funding was instead diverted to another business that required assistance in the wake of the oil bust and needed to find alternative solutions.

That company, BlackFoot Services, is owned by the same owners of BK Equipment, which specializes in oilfield equipment rentals.

“When the energy sector issues happened, they decided they weren’t going to be failures,” Roggow said. “One day, they were down at Byford, they were bringing some crews down to wash the cars. They said, ‘Hey, let us wash your cars,’ because in their minds it was, ‘We just need to make money.’ All of a sudden, one thing turned to another and a few brainstorming ideas created an entire prototype.”

Roggow said the funding instead went to BlackFoot Services, which now provides a dry fogging disinfectant service to help with sanitization efforts throughout the COVID-19 pandemic. BlackFoot’s goal was to find a way to keep people employed when jobs in oil just weren’t available.

“BlackFoot Services was working on a prototype that was truly a COVID related thing,” Roggow said. “It’s the same funds, just going to a different business.”

The prototype for the dry fogging system can be used for school busses, hotel rooms, nursing homes and more and is portable, and has a touch screen that is user friendly and can determine the amount of sanitizer needed to treat a room based on its size.

BlackFoot Services received a visit from Oklahoma leadership last week during the OKCARESTour and that tour, Roggow said, also opened up some opportunities where the Duncan business and another business from Tulsa connected and could potentially open up the aviation field for them.

“They’re able to get critical pieces of equipment they normally would not be able to get had it not been for this grant and basically the way that works there is that we’re kind of the mid person, we own the equipment, we lease it to them for a very nominal fee, possibly a dollar, so that allows them that flexibility to use that piece of equipment to benefit them and it’s usually a critical piece they normally wouldn’t have,” Roggow said. “It’s a very timely and very critical grant for them to be successful.”

The first share of money, which totals to $100,000 for City of Comanche through a Rural Business Development Grant, went to purchase and renovate the abandoned motel property at the south end of the town to create a public market to host up to 40 vendors.

“That facility has been vacant for several years and has been a major nuisance and so it’s not only going to be an improvement through the nuisance — that’s the first building you see coming in from the south — but it’s hopefully going to be an economic stimulator,” Ralls said. “We’re going to convert it into a farmers market/fleamarket … but with a few twists.”

Some of those twists, Ralls said, include renting out rooms on a monthly basis and also utilizing three acres of land that goes along with the property.

“We will be able to allow farmers to set up,” Ralls said. “Local farmers will get free access, so they can come sell their goods. Of course the commercial ones will need to get a permit. But then we also have enough room for the vendors who like to set up the popup tents and bring in their trailers and do the large fleamarket type displays. So that is our goal.”

The project looks to open March 1. Ralls said the funding was split and 60% was used for the purchase of the property while the other 40% will go toward renovations.

“It’s going to be slim but we’re hoping we can complete the renovations that need to be done within that budget,” he said.

The second share of funding, totaling $46,000, will go to purchase and convert an abandoned gas station into a small business incubator. The property in question is located on Highway 81 just off Main Street, Ralls said.

“Again, another eye sore in Comanche,” Ralls said. “It’s become a little more difficult because once they got through the grant process, the U.S. Historical Society has deemed this a historical building and so we’re having to go in and do architectural renderings and things to make sure that we’re not going to change the architectural or the historical value of the property.”

The business incubator, which has no firm timeline on completion yet, will allow new business start ups at a low cost with very low rent and possible free utilities for a period of time.

“We had another project where we did the same thing here in town and it has been a huge success so we’re really just trying to entice new businesses to open up and hopefully catch the eyes of some investors or developers and get them into town as we continue to do things through the city,” Ralls said. “We continue to try to do things for the community to benefit them and in turn benefit the city because the more projects we have like this that are bringing revenues to the city, whether it's through utilities or sales tax, that defers having to do rate increases and things like that for the citizens.”

The business incubator, Ralls said, already has three potential tenants, including one with ties to healthcare, one with ties in the food industry and one that looks to be a laundromat.

For more information on USDA funding opportunities or on those in the state who received assistance, visit www.rd.usda.gov.