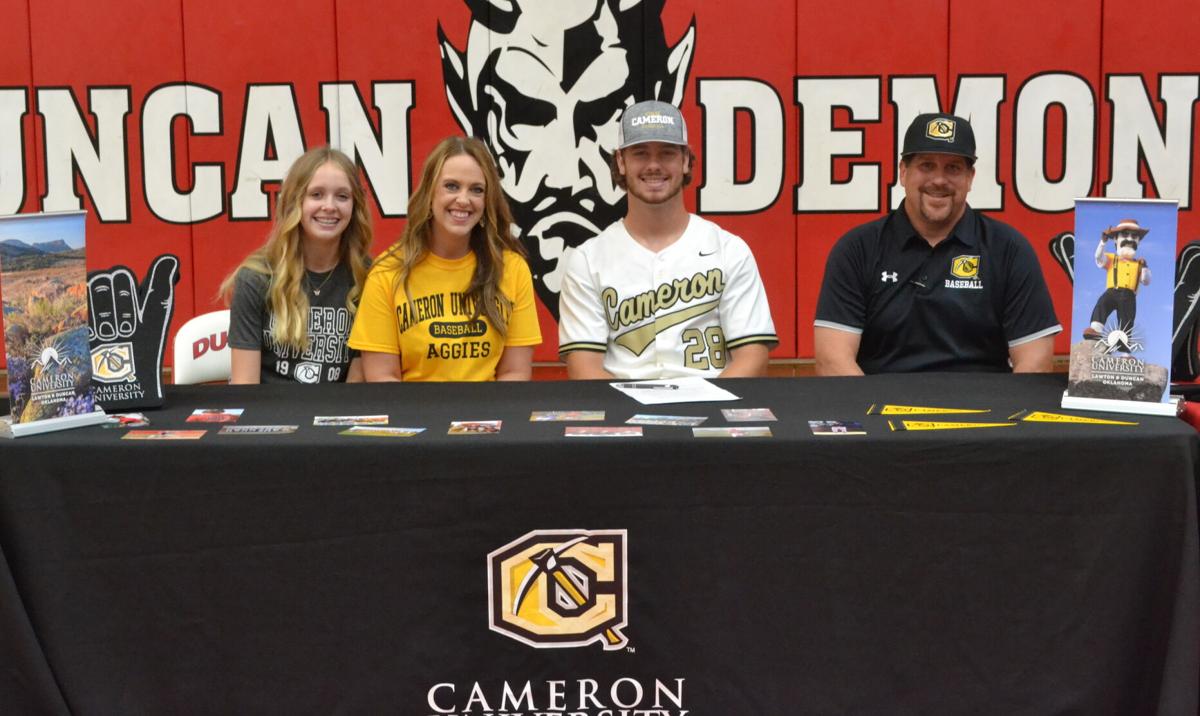 Jackson Attaway joins his family before signing on the dotted line to play college baseball for the Cameron University Aggies next school year. 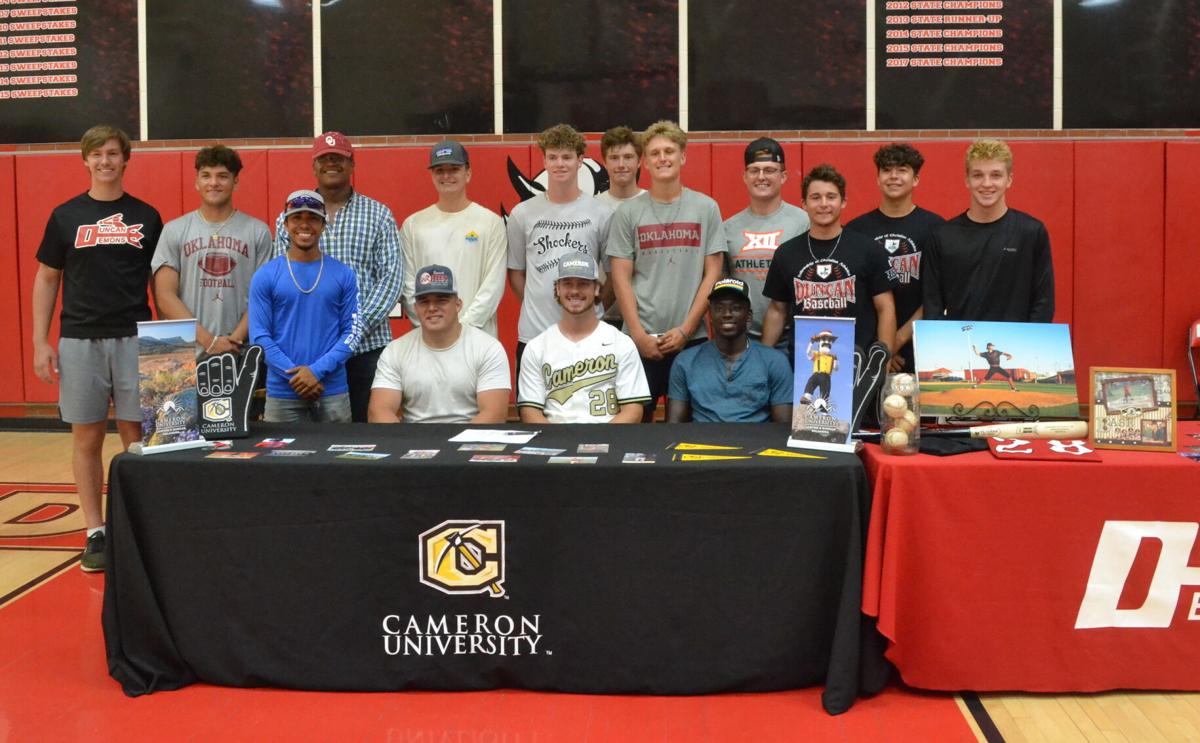 Jackson Attaway joins his family before signing on the dotted line to play college baseball for the Cameron University Aggies next school year.

With two different paths to choose from following high school graduation, Jackson Attaway selected to play baseball at Cameron University. He signed a letter of intent to play for the Aggies last week.

Attaway played two sports for Duncan High School. He took part in the Demons football program as well as the baseball program and has been a great prospect for college baseball.

As one of the district pitchers for the Demons in 2021, Attaway pitched the most innings for Duncan. He went 43.1 innings and 5-2 on the hill for the 2021 season.

Attaway struck out 33 batters and walked 18 batters while having an ERA of 4.04. He also completing the first perfect game in Duncan High School history in the 2021 season.

Back on March 11, Attaway completed the feat by going all seven innings and allowing zeros in every category while striking out six batters facing the minimum 21 batters. He also was a threat on the offensive front batting .266 and had 21 hits in the games he played.

Attaway said he was excited to play for Cameron University.

“I was talking to the assistant coach about the possibility of playing at Cameron and he had me come try out through the Shockers for summer ball and he liked what he saw and decided he wanted me to commit there,” Attaway said. “When he gave me a tour of the campus and showed me all the facilities there, they were all super nice and I felt that it was the place for me.”

Duncan Football Coach JT Cobble, who coached him for several seasons, said he is proud to know Attaway is going to play at the next level.

“If there ever was a kid that deserved to get to go play a sport at the next level, it’s Jackson,” Cobble said. “He has done everything right for the three years I’ve been here. He’s excelled in two sports at a high level, never missed, made great grades, had a terrible injury that sidelined him for a lot of his senior year and never once complained. He just made the best of the situation and tried to help out in any way he could. He’s a very high character young man and I can’t wait to watch him continue to grow as a student athlete at the next level. I’m very proud of the young man he’s turned into.”

His baseball coach, Erik Hughes, also agreed with Cobble on how hard Attaway worked and said it was a pleasure to coach him all four years.

“It’s been a pleasure and honor to have coached him,” Hughes said. “All his hard work has brought him to this point and has paid off.”

While reflecting on his time at Duncan, Attaway said the perfect game helped him realize he wanted to take his baseball career further. Now, he looks forward to representing the Demons in college.

“When I realized I had something special for pitching for the next level, it was against Ada. I threw a perfect game against them and that was the first one to be thrown at Duncan High School,” Attaway said. “I want to thank my high school coaches and if it was football, it was running and doing all the workouts that we had to do build mental toughness. And for baseball, it was having to run the seven minute miles that gave me mental toughness that got me to be the player I am today.”

While undecided on a major, Attaway still wants to fulfill his lifelong dream of becoming a firefighter while also playing baseball.

“Ever since I was little, my dad helped me with sports no matter what it was, whether it be football or baseball, and he was a big influence in my life while my mom also pushed me to do good in school and sports — so they helped me a lot,” Attaway said. “I am undecided as my major at Cameron, but my future plans … after college is to be a firefighter in Lawton.”