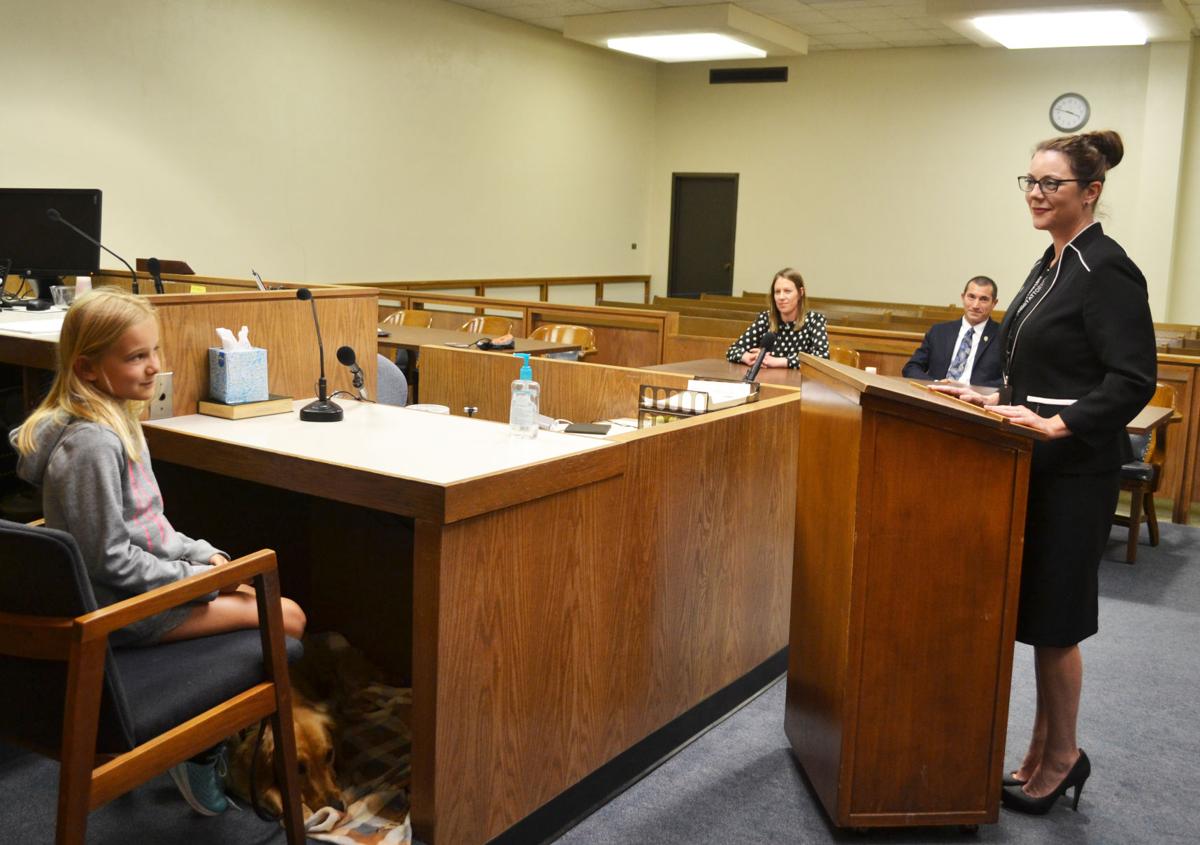 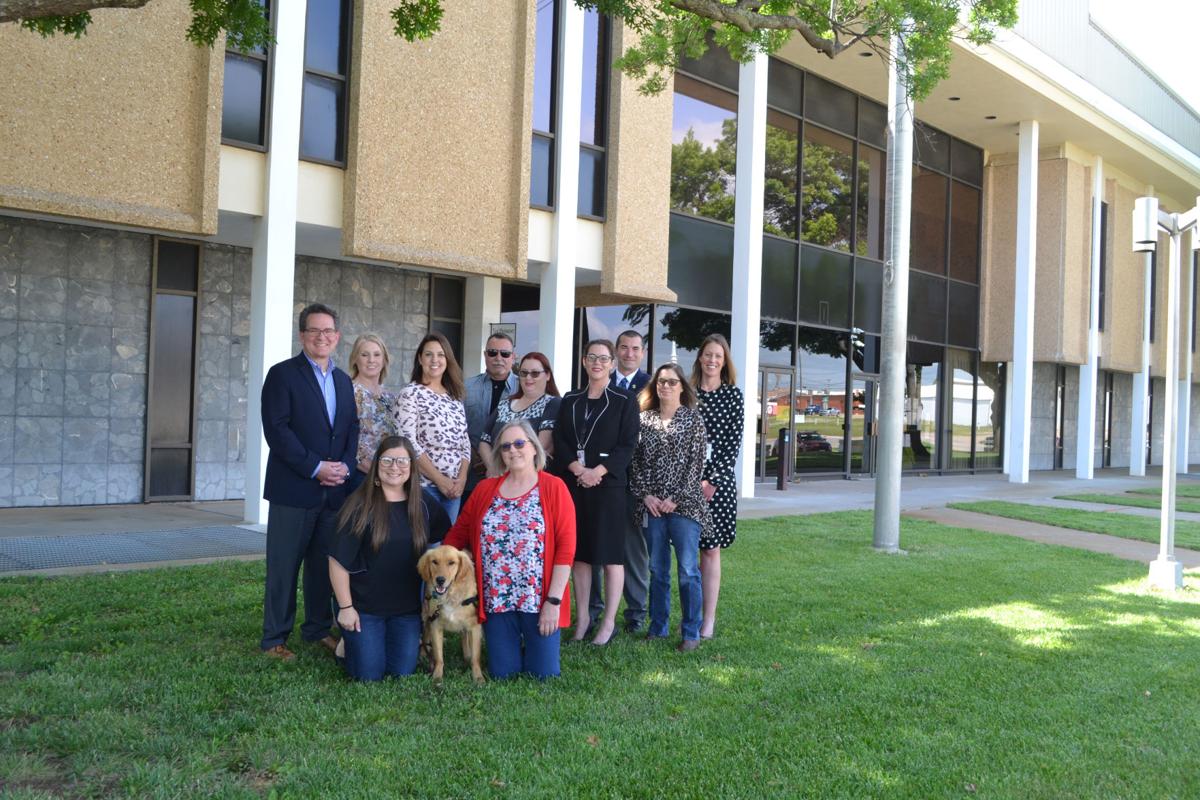 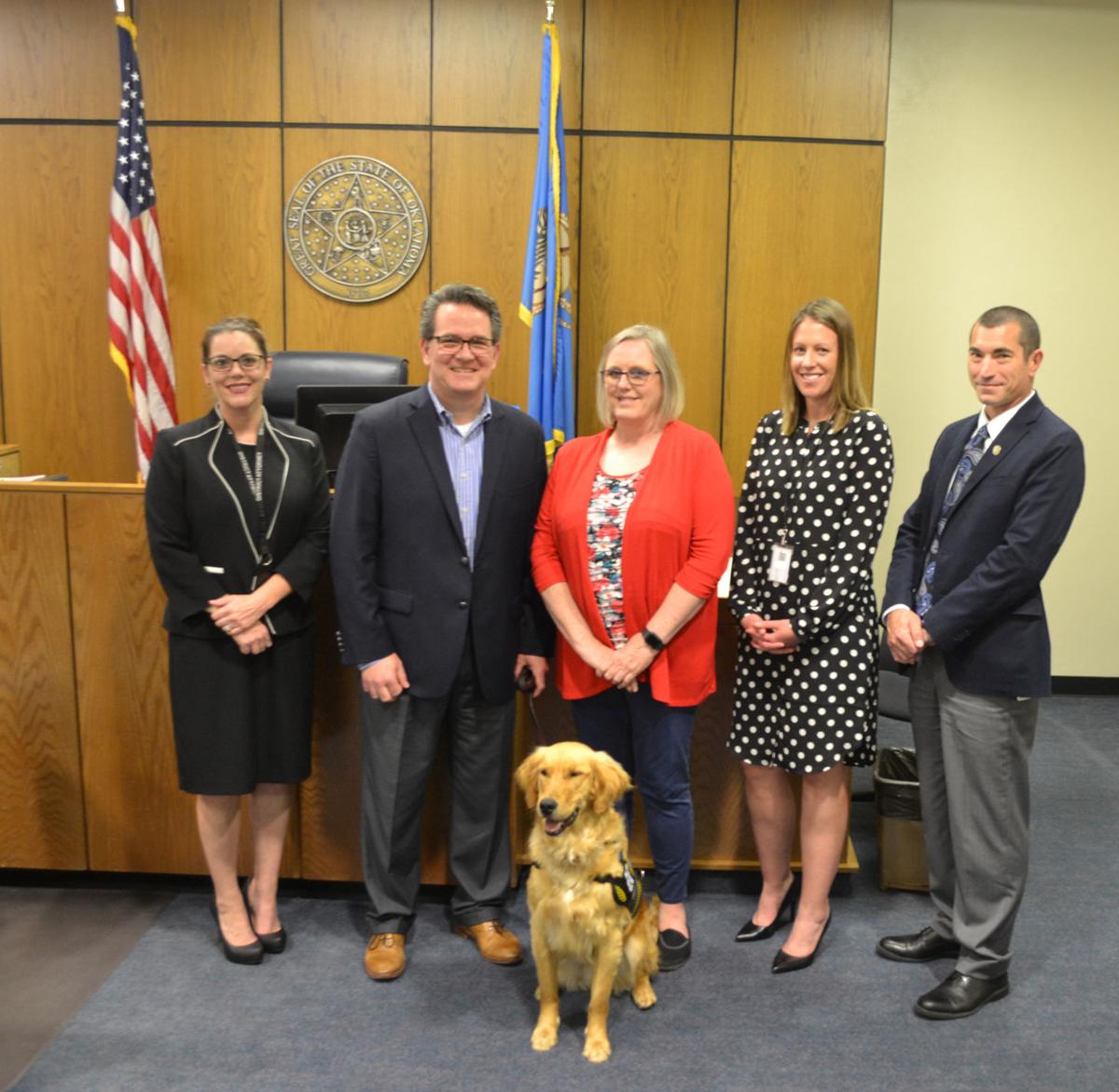 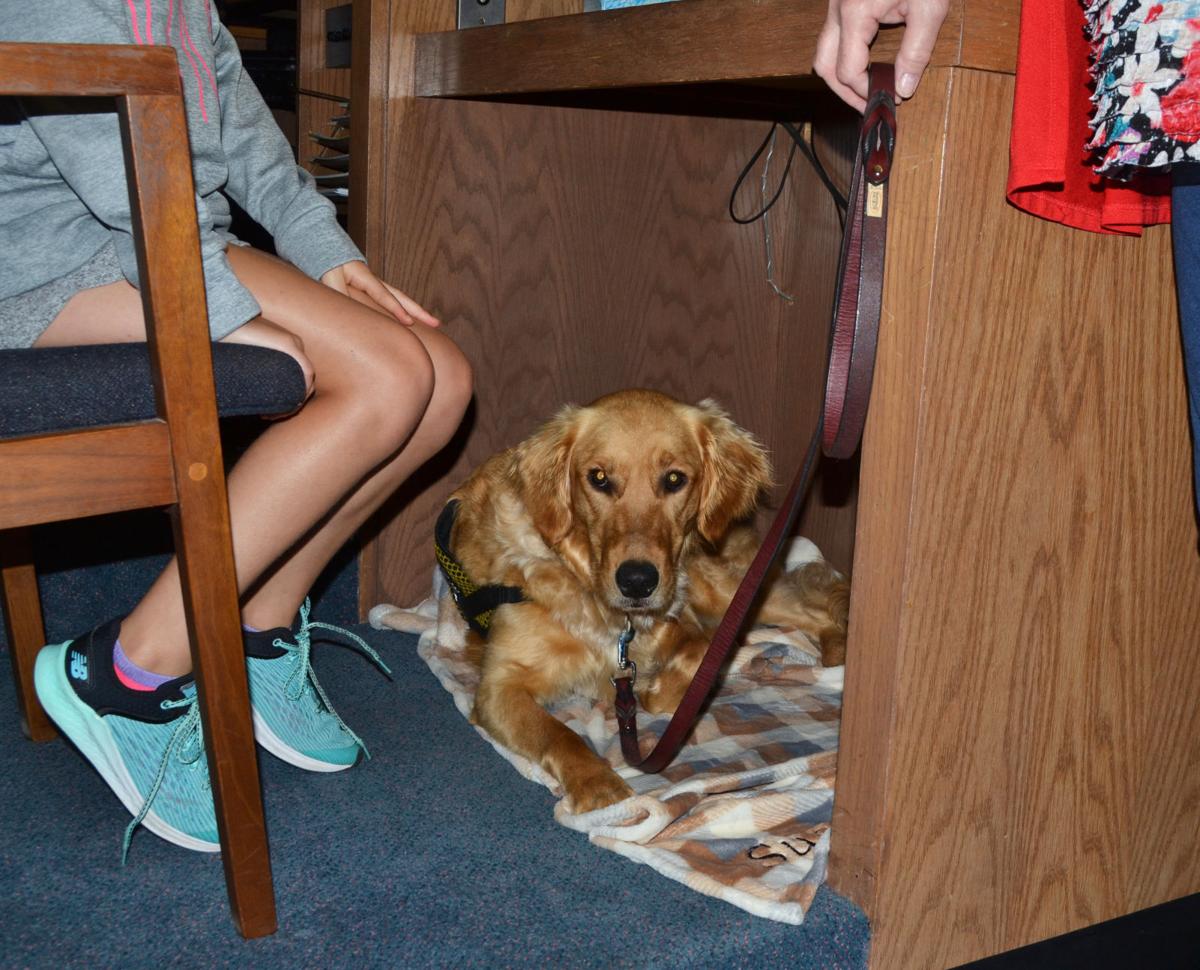 Sunny’s vest and tag allow him in the courtroom to help assist with the needs of those on the witness stand. 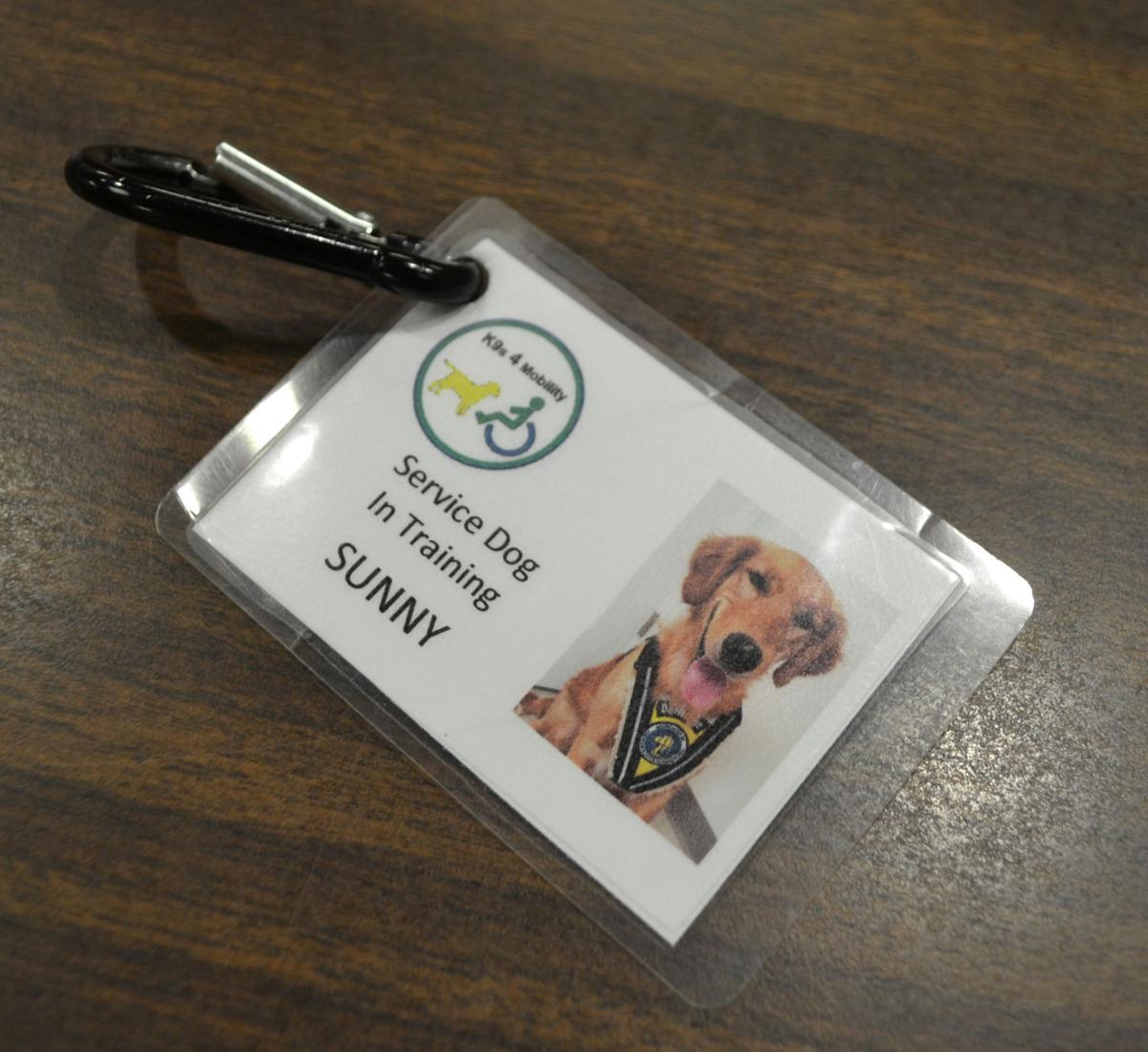 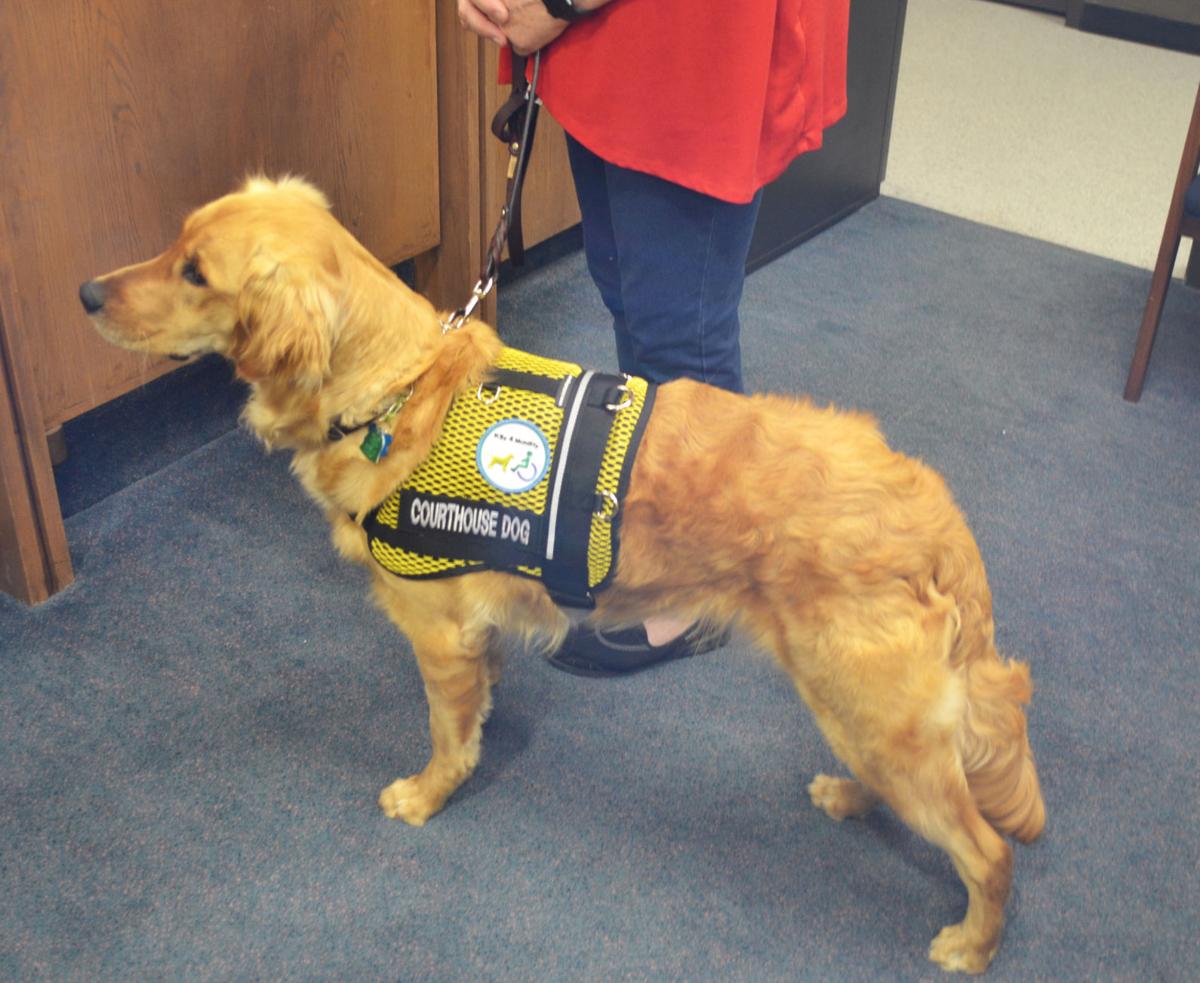 Sunny’s vest and tag allow him in the courtroom to help assist with the needs of those on the witness stand.

Sometimes a dog hears the heart before a human ever could, showing love and patience where needed the most. That’s why courthouse dogs will soon join legal teams in Stephens County: to help provide care for a child or victim and assist their emotional needs inside the courtroom.

Sunny, a courthouse dog who doubles as a service dog in training with K9s 4 Mobility, uses a specific blanket with his name embroidered on it to mark his place in the room.

According to District Attorney Jason Hicks, the blanket goes in the witness stand and Sunny follows. When the witnesses are scared or sometimes become agitated, the dog will provide comfort to help the emotions going on inside of them.

“The witness will sit down, and they are encouraged to take their shoes off and put their feet on him … and he just lays there,” Hicks said.

Those in the courthouse show excitement about this new program, which would make a courtroom experience more calming for many people.

“I think it’s something all of us are really excited about and I think it would be really good for victims and especially children in the courtroom, because this courtroom could be a really scary place, especially for a child,” Hicks said.

Michelle Woerner, CEO of K9s 4 Mobility, said the program she works for is accredited through Assistance Dogs International (ADI), which makes sure the K9s 4 Mobility operates at the standards of the ethics of the industry.  The organization works with Courthouse Dogs Foundation, which started the whole courthouse program about 10 years ago.

According to Woerner, Courthouse Dogs Foundation has set the standards and they’re an affiliate partner of ADL. They worked with the Stephens County Courthouse with the legal part and how to involve the dog, get judges support and more.

The process starts with a puppy with training in the home. From there, Woerner and her team will take over training, which moves to local, empty courtrooms by sitting in the witness box and eventually bench hearings.

The training process, according to Woerner, who comes from Cheyenne, Wyoming, allows to the dog to become used to the courtroom sounds and the variety of noises the dog will hear during a session.

According to Woerner, who works with Sunny, dogs in the program are trained to sit still as well as pick items up such as keys, a remote or anything someone has dropped on the floor and needs retrieving.

“We came up here to see what the courtrooms were like and Jason brought his kids in, so we had some kids to work with the dog,” Woerner said.

In visiting Stephens County, Woerner learned the courtrooms had a slight difference. Training rooms had a solid witness box, where the dog is not visible to the judge. Now, the judge can see the dog and the dog in turn had to learn somebody else would be moving around and not just the human they were accompanying.

The training team also scopes out the office and where the dog will live outside of work.

After the training team gets to know the courthouse and surroundings, they take the dog back and begin training them specifically for the job they will do.

“A courthouse dog has to be placed as part of the legal team,” Woerner said. “If they want a dog to come in and work with kids periodically, that would be a therapy dog and the person that has a therapy dog is not already privy to this information and doesn’t know how to work with the kids … and victims. So, it has to be a part of the legal team, so that they already have all the confidentiality.”

According to Woerner, the person working with the dog introduces the child or victim to the dog in what is called an interview room. The dog then builds a relationship and a bond with the individual within at least 30 minutes, allowing them to become comfortable with one another.

“Usually the attorneys will bring him into the courtroom to introduce him to the courtroom,” Woerner said. “It’s two to three times the child will work with the dog before they actually get into the witness box in front of a judge.”

Morgan Clark, 8 years old, sat with Sunny on the witness stand where Sunny laid at her feet, unseen to the rest of the courtroom.

“When the dog goes in the box, they know each other and are comfortable with each other,” Woerner said. “The dog is just supposed to lay there and be quiet, no whining, no barking, no moving, no playing. What they want is for nobody else in the courtroom to actually see the dog. Everybody knows the dog is there, but nobody should actually see the dog, once the dog goes under there that’s where the dog stays.”

Sunny knows a list of commands and does well with children.

“Sunny is very appropriate with kids,” Woerner said. “He’s not allowed to jump on kids, he doesn’t paw at kids. He has a command which is a head rest, where if you’re sitting, he puts his head on your lap. If you’re standing, he leans his head against you. That’s his way of saying, ‘I would like your attention, I’m comfortable with you. When kids are on the floor, he has to be laying down, we never want him to tower over the kids.”

Woerner said they teach all their assistance dogs certain skills, such as retrieving items for those with disabilities.

“We still teach our courthouse dogs to do that because when the child is building that bond with them, being able to drop something, like the remote control in the interview room and the dog gets it, it’s incredibly empowering for that child that maybe nobody’s listened to up until now, and they ask the dog to do something for them and the dog does it, and the dog’s happy to do it,” she said.

Woerner recalled a case where one juvenile, a past victim, became an offender and had a lot of emotions bottled up. Working with a dog in this case helped, Woerner said.

“When she comes in, she’s been very hostile, she’s been very violent and so we introduced him to her prior,” Woerner said. “She loved on him and he laid down on his blanket beside her and he laid there the whole time, put his head on her foot and … she stayed calm the entire time. The judge talked to her, she never raised her voice, she never became violent, and all he was doing was laying there.”

Woerner said mostly the dogs care for the victims, such as children and women that have been victims of different abuses, but they can be used in this circumstance as well. The dogs are also used with foster kids who need to sit in the courtroom with their foster parents.

Sunny has his boundaries and a routine, like breaks throughout the day, and they try to find a balance of work and play for the dogs. He has time to be “just a dog,” but if he has his vest on, that means he is working.